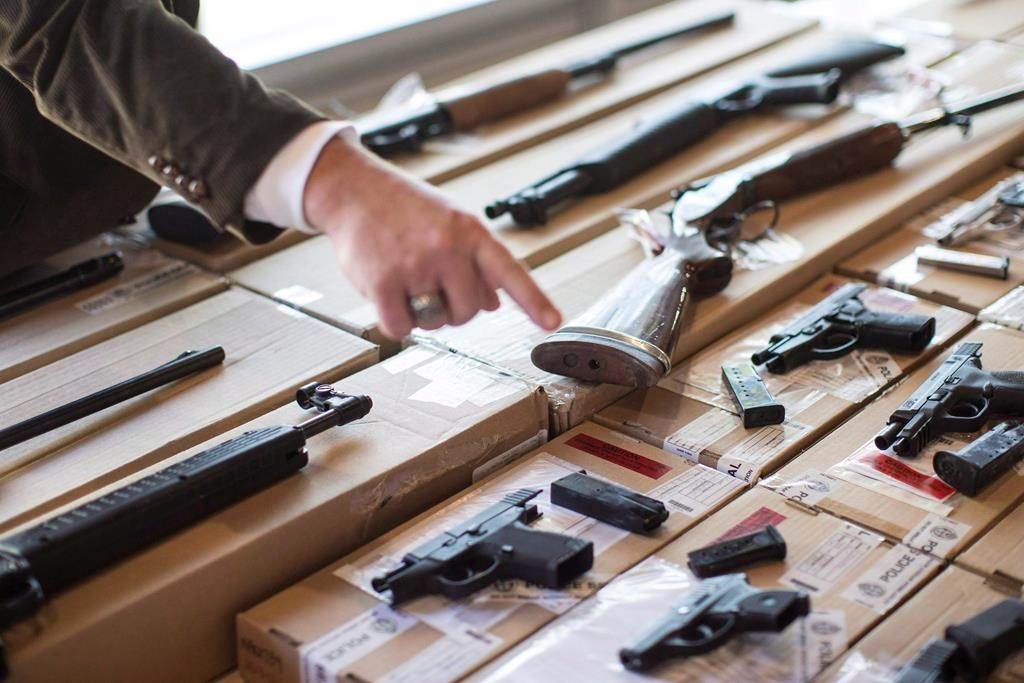 A police officer points out a fire arm as police display guns seized during a series of raids at a press conference in Toronto on June 14, 2013. File photo by The Canadian Press/Chris Young
Previous story
Next story

The Trudeau government is again delaying implementation of firearm-marking regulations intended to help police trace guns used in crimes — despite a 2015 campaign pledge to immediately enact them.

The federal government announced Friday it will defer the regulations, which were slated to come into force early next month, until Dec. 1, 2020.

It said more time is needed to come up with a system for implementing the regulations, first drafted in 2004, adding that details about the deferral would be made available later this month.

The firearms community has long opposed the measure.

The regulations would require domestically manufactured firearms to bear the name of the manufacturer, serial number, and "Canada" or "CA," while imported guns would have to carry the "Canada" or "CA" designation along with the last two digits of the year of import.

The measures would help Canada meet the requirements of the United Nations Firearms Protocol and a convention of the Organization of American States.

Public Safety Canada has said the markings also have value for domestic and international law enforcement in tracing crime guns.

In a statement Friday, the department said the government is continuing work "to develop an effective markings regime that enables law enforcement to effectively trace crime guns, without imposing undue constraints or costs on firearms owners and businesses."

In their election platform, the Liberals said they would "immediately" implement gun-marking regulations. In addition, the marking-regulation promise was included in a briefing book document prepared for the prime minister entitled "Key Commitments for Action in First 100 Days."

At the time, officials said the effect of the Conservative government's destruction of the long-gun registry would need to be considered before bringing the regulations into force.

Some firearms advocates have argued the obligation to mark imported guns would mean acquiring marking technology or making arrangements for another company to apply markings, with an estimated cost of $200 per gun.

However, an independent study commissioned by the government said the cost to stamp or engrave markings for Canadian manufacturers and large importers would range from nothing at all to $25 per firearm. It was not possible to gauge the impact on individuals and small importers.

Many Canadian gun manufacturers exporting to the United States already mark their firearms in a manner that would meet or exceed requirements set out in the regulations to meet U.S. standards, and at least one importer has voluntarily applied import marks, according to an internal government memo.

Regardless, the memo said, the majority of firearms advocates and businesses are "strongly opposed" to the regulations due to the perception they would saddle manufacturers and importers with additional costs while providing little public safety benefit.

Trudeau on guns: 'lots of conversations' about next steps but no new registry