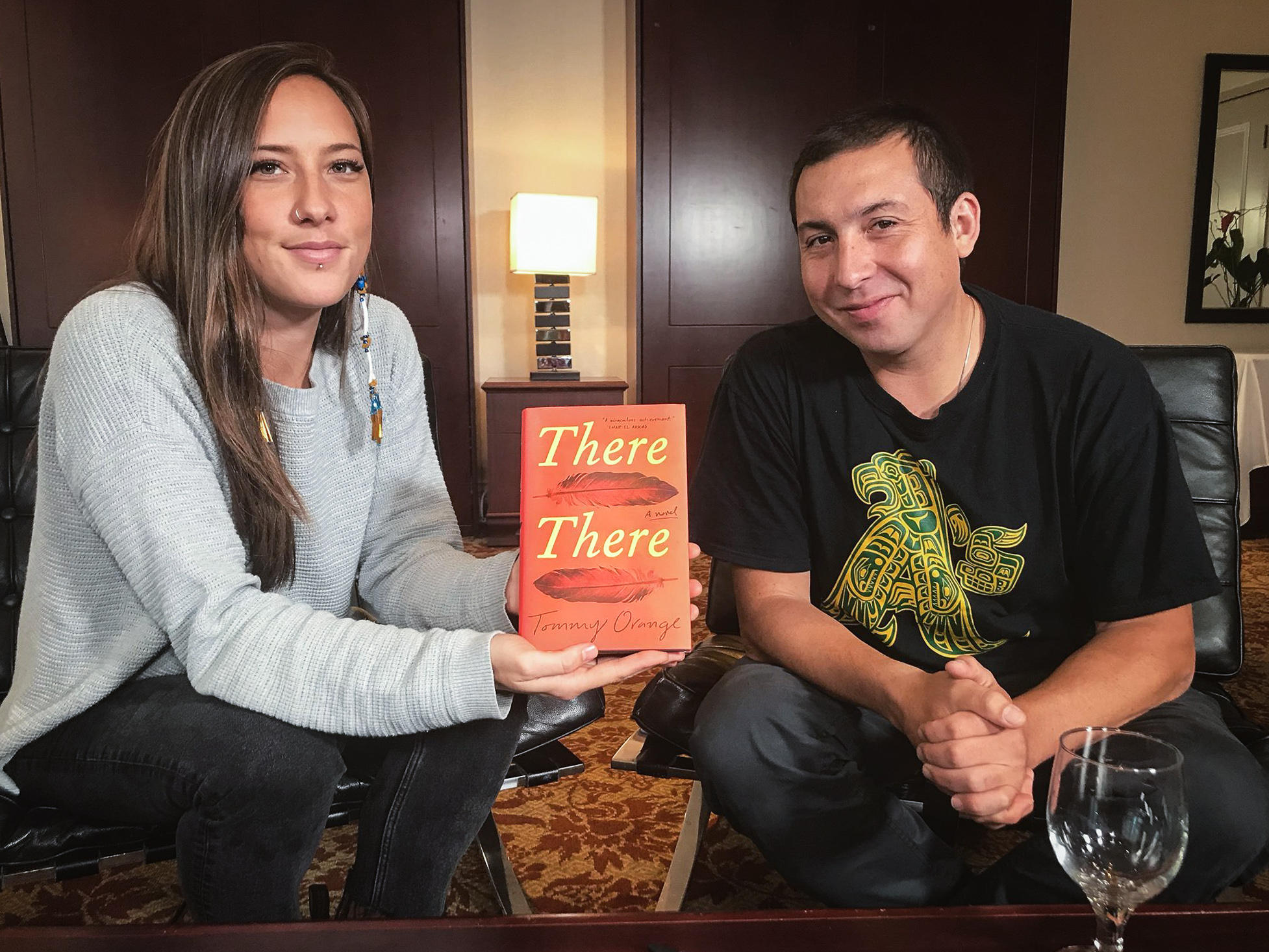 Reporter Emilee Gilpin and author Tommy Orange discussed Orange's best-seller 'There There' and the wild journey he rode to its success. Photo by Michael Ruffolo
Previous story
Next story

Author Tommy Orange didn't expect his first novel There There to get so much attention. Published in June, he hit The New York Times best seller list right away and stayed for 11 weeks. Orange sat down with National Observer while he visited Vancouver for the annual week-long 2018 Writer's Fest to discuss his novel, his childhood, where he learned to write and the upside of a Trump presidency.

Orange, who's Southern Cheyenne, spent four years (from 2012-2017) crafting 'There There,' a tale following the lives of 12 characters from Oakland, California, whose lives converge at a PowWow at the Oakland Coliseum.

"You kind of find out along the way how they're all connected and what ends up happening at the PowWow," said Orange, who is based in Oakland.

There There is written from first, second and third-person perspectives. Orange told National Observer that "Native people are often thought of in historical terms," or that there's "one way to be Native," so he made it a point to give dynamic range to his characters.

Some of the traumatic, wild, humorous events in the book were taken from his own experience, like the time he pulled two spider legs out of a bump on his leg in a bathroom at a Target store in West Oakland. He was incredulous.

"Just like I have the boys do in the novel, I googled it like crazy and found nothing," Orange said in the interview, laughing and shaking his head at the memory. "Because it was a spider and it seemed Indian, I called my dad and told him about it and he said 'it sounds like somebody witched you,' and then nothing else," he laughed, as if he'd have to figure it out on his own.

Orange also pulled reflections from his internal life, he said, as a way to "get specific" with the characters and their challenges, thoughts, struggles with identity, culture, and sense of self.

Orange recently graduated from the MFA program in Fiction at the Institute of American Indian Arts, where he now teaches Creative Writing. He is a 2014 MacDowell Fellow, and a 2016 Writing by Writers Fellow and spent time facilitating digital storytelling workshops, where he said his respect for peoples' individual stories deepened.

Orange took a break from a week of activities during Vancouver's annual Writer's Fest Oct. 21-27 to meet with National Observer and talk about his first novel, his reaction to its success, and where he learned to read and write.

Award-winning Native writer @thommyorange told @natobserver reporter @emileeguevara about how he never grew up reading, he thinks fiction plays an important role in society, and how the success of his first novel rode a strange parallel to Trump.

"I didn't get into reading until after college," Orange shared. "I got a job at a used bookstore and started reading some of them. I had a hole of meaning I needed to fill in that time in my life." He "realized what a novel can do," and decided that he too wanted to write.

'There There' is written from first, second and third person perspectives and it consciously complicates, contorts and challenges every stereotype about urban Natives Orange has experienced, he shared with National Observer in the Oct. 23 interview.

Orange said media attention following the success of his first novel was at first challenging and surprising, but has started to "feel kind of normal." He said he's grateful for the attention because he wants people to know the stories of the 12 characters in 'There There.' He thinks it will complicate conceptions and misconceptions about "what it means to be Native."

Orange said he has been asked questions he doesn't think "your average white male author" often confronts, and that he has had to deal with ignorant probes into his identity and authenticity. Orange wants to see more Indigenous writers infused into the mainstream, rather than just "your token Native writer." In this section of the interview, he offers advice for writers looking for discipline and inspiration.

"These are songs I either listened to while writing, or that appear in the novel 'There There,'" Orange tweeted on Oct. 4, sharing a link to a Spotify playlist he created.

When asked about his experience living in the United States for the past two years that Donald Trump has been president, Orange shook his head and sighed heavily. In some ways, he shared, he thinks the success of his book came from the feeling of hopelessness that washed over many people opposed to a Republican majority. In this section of the interview, Orange tells National Observer about how his agent read his novel and said it gave her hope, and he urged her to put it out to as wide an audience as possible.

Orange said Trump is a symptom of much older societal diseases that in many ways made a Trump presidency possible. Many people of colour and Native people, he said in the Oct. 23 interview, weren't as shocked when Trump was elected, having confronted social, political and racial injustices since the so-called "founding of America."