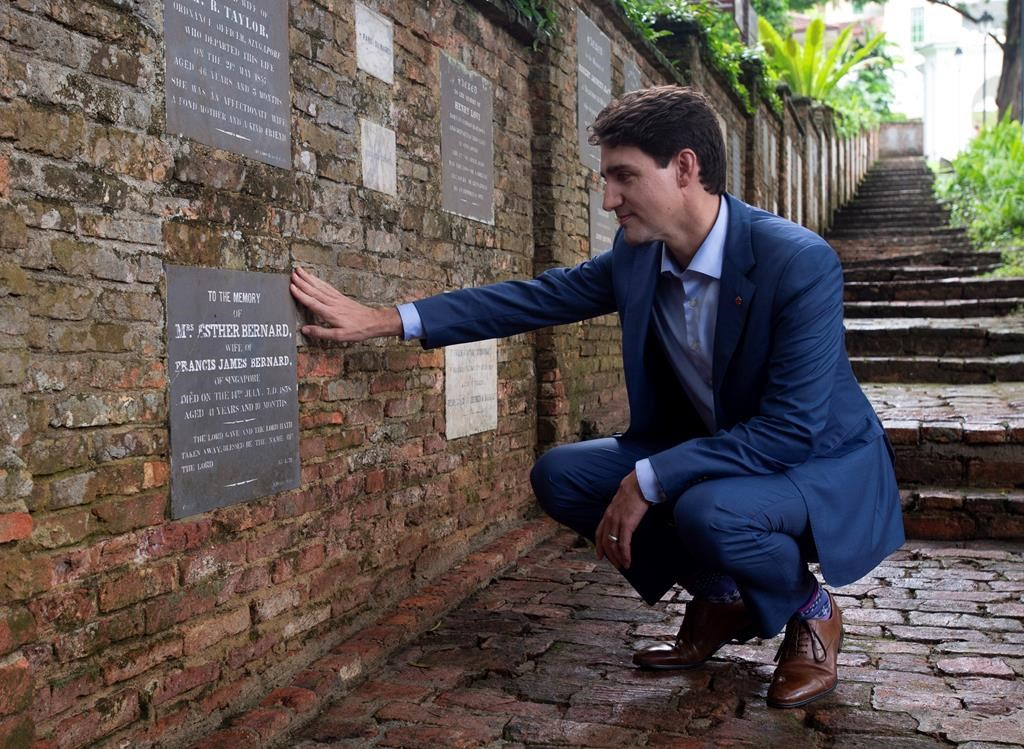 Slowly strolling along a paved walkway, Prime Minister Justin Trudeau looked around Fort Canning and came face-to-face with his history.

The brick walls lining the stairs on the park's edges hold memorial stones of its historical residents, including Esther Bernard, one of Trudeau's ancestors.

She was the daughter of one of Singapore's most famous residents — William Farquhar.

Trudeau wasted no opportunity talking about his familial ties during his time in Singapore, hoping to parlay his personal history into diplomatic success in an area where trade is so often based on relationships.

The prime minister joked about how locals could call him cousin, and he referred to his high cheek bones and ability to tan dark.

On his first day in Singapore, Trudeau talked about visiting the city state with his father, saying he had "a proper appreciation of my family history."

His grandmother had told stories about the family tree leading back to southeast Asia, which "caused us to trace down the fact that I am a direct descendant of William Farquhar, who is one of the founders of Singapore," Trudeau told a gathering of business representatives on Tuesday.

In 1819, Farquhar became the first commandant of Singapore, and was given orders by British statesman Sir Stamford Raffles on how to build the city.

While Farquhar listened to some of the instructions, he didn't follow all of them. He let the locals keep their gambling dens and sell opium among other decisions aimed at allowing some cultural practices to remain.

Annoyed, Raffles returned in 1822 and ousted Farquhar from his position.

Farquhar's wife was Malaccan from Malaysia and their daughter, Esther, is related to Trudeau on his mother's side. She had a grandson who immigrated to Canada, landing in British Columbia.

Speaking to university students before Thursday's visit to Fort Canning, Trudeau said the details of his family history emerged when his mother took part in a television show that digs into family trees.

"It's a story that, for me, doesn't just highlight the connections between Canada and Singapore — it also highlights the advantages and the reality of diversity and multiculturalism," he said.

"I wouldn't exist if it wasn't for multiculturalism and I think that's something that binds Singapore and Canada together."