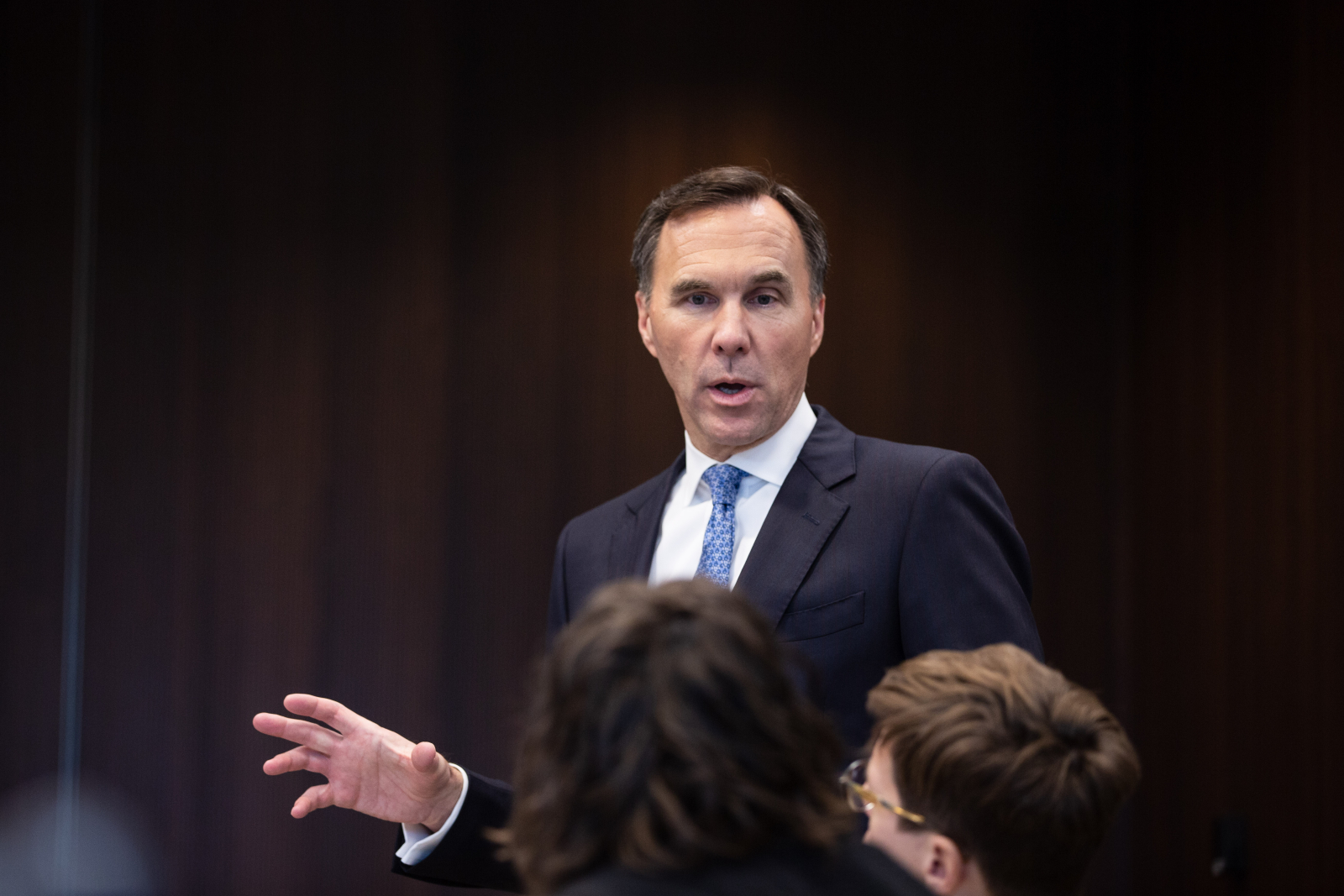 The Trans Mountain pipeline has generated $70 million in earnings since it was bought by the Canadian government, Finance Minister Bill Morneau's fiscal update revealed Wednesday.

Pipelines generally charge tolls in exchange for allowing substances like crude oil to flow through them, similar to how a toll highway works. The $70 million is largely due to revenue generated from these tolls.

"Since acquisition, the Trans Mountain entities have earned $70 million in earnings before interest, taxes, depreciation and amortization," the fiscal update released Nov. 21 stated.

The government said this value represented over $200 million on an annualized basis. Given that the Trans Mountain expansion project has not been built yet, the existing Trans Mountain operations would be generating these revenues.

Canada still wants out of the business

Since Canada bought the troubled Trans Mountain pipeline, its expansion project and related assets for $4.5 billion this summer, it has become the property of a Canadian Crown corporation called the Canada Development Investment Corporation.

That Crown corporation, which goes by the short title CDEV, controls the pipeline through a subsidiary called the Trans Mountain Corporation. The government's Canada Account, managed by Export Development Canada, loaned money to CDEV to finance the purchase.

The pipeline's expansion project would triple the capacity of oil and other petroleum products shipped from producers in Alberta's oilsands, up to 890,000 barrels per day, to a terminal in the metro Vancouver suburb of Burnaby, B.C.

The government's purchase closed at the end of August, but Morneau first announced in mid-May he was prepared to protect the pipeline against financial loss.

The finance minister took the step after a hectic month that saw the original corporate proponent of Trans Mountain, Texas-based Kinder Morgan, threaten to pull out of the project after massive protests and resistance from British Columbia Premier John Horgan.

That spurred the Trudeau Liberals to huddle in discussions with Alberta Premier Rachel Notley and Horgan, who had pledged to use all legal tools available to block the Trans Mountain expansion's construction.

Morneau said at the time that he saw the role of the federal government as breaking the impasse created by Horgan. But the government has also said it never intended to be a long-term owner of the pipeline.

The minister's fiscal update reiterated this stance Wednesday. "The government’s purchase represents a sound investment opportunity. It is not, however, the intention of the government of Canada to be a long-term owner," it read.

After it bought the pipeline, Ottawa then lost its approval to construct the expansion project, following a federal court ruling that the National Energy Board (NEB) failed to address the impact of tanker traffic on the marine environment and the government did not undertake meaningful consultations with First Nations.

The Trudeau Liberals announced in September they were taking a series of steps to fix the new impasse, including launching a new NEB process which began hearings this month.

The fiscal update said Ottawa expects to record the Trans Mountain entities "as an asset valued at the final purchase price."

Ottawa said it was still uncertain when it will sell the pipeline or even when construction would start again. Given that uncertainty, the fiscal update stated, its budgetary projections aren't yet affected by these factors.

What percentage of those

What percentage of those profits went back to big oil in rebates?

Revenues of course are not

Revenues of course are not profits. There is always that little issue of business operating expense. Even so, there are likely regular profits of some sort coming from that existing pipeline. However, a bigger 'little issue' is how much of that revenue was put aside to support that portion of the unfunded ecological liability of $260 billion associated with the generation of the gas that generated those revenues? I'd suggest the answer to that question is "$0.00", making the government as irresponsible as the industry it has bought into. It didn't take long for the fresh-faced "we're back" Liberals to morph into a piece of the problem, not the solution.

Actually, we paid more than

Actually, we paid more than twice that: $4.5 billion.

So just to be clear, if the

So just to be clear, if the gov't made $70 million in the 2.5 months since it bought the thing at the very end of August, it would only take another 13-15 years of perfectly steady revenue generation for us to make back the $4,500 million we spent on buying it! Or at least, it would if that $70M wasn't just referring to Earnings before Taxes, Interest, Depreciation and Amortization (EBTIDA)... we have no info on what's actually left after those are all taken care of. Still, whatta bargain! (For the Transmountain shareholders, anyway.)

The $70 million EBITDA (earnings before interest, taxes, depreciation and amortization) estimate - equivalent to "$200 million on an annualized basis" - is far less than Kinder Morgan's reported EBITDAs of $388M, $395M and $368M for the 2017, 2016 and 2015 fiscal years, respectively. The $4.5B price we taxpayers paid for half of KM's Canadian assets was based on a multiplier of 11.6 times current-year EBITDA (11.6 x $388M = $4.5B). This math suggests that, using current-year EBITDA of $200M, we vastly overpaid for a leaky, 65-year old pipeline. A fairer price would have been half that- about $2.4B. This lower valuation is supported by KM's expected pricing - $2.5B - for the other half of its revenue-generating Canadian assets - the Edmonton storage tanks and terminals, the Cochin condensate pipeline and the Vancouver wharves terminal - that were not included in the Government's pipeline purchase. Suckered?

This from Trans Mountain

This from Trans Mountain Corporation
"The period ended September 30, 2018 includes the month of September’s operations of the TMPS. Total TMC revenues were $33 million, $27 million of which was from pipeline transportation tolls. Operating income before deducting interest costs, taxes and depreciation (“EBITDA”) was $15 million. To finance the TMPS entities acquisition, TMP Finance borrowed $5.2 billion from the government’s Canada Account administeredby Export Development Canada (“EDC”). $500 million of these borrowings were used to backstop a letter of credit in satisfaction of a National Energy Board requirement for TMC to have suitable financial resources to pay for any potential environmental damages. Of the remaining $4.7 billion in borrowings, $4.427 billion was paid to Kinder Morgan and the balance was used to fund working capital requirements. TMC continues to prepare for the potential restart of construction of TMEP once the required approvals are received".

Translated from accounting jargon, this says that, in its first month of new ownership, TransMountain made a loss of at least $15M :
- on revenues of $33M ($27M of it from pipeline tolls)
- with operations & maintenance costs of $18M for Sept.
- with monthly Interest costs of $20.3M on $5.2B borrowings, at 4.7%, to finance the acquisition ($4.67B for the acquisition and extras, $500M for the spill insurance required by the NEB, $30M for the TMX construction pre-work)
- with Depreciation costs on the purchased assets (existing pipeline, Burnaby tank farm, Westridge terminal and dock and Puget Sound pipeline spur ) at $10M per month.

The net for the month is a whopping $15M loss on $33M revenues . Annualized - that's a loss of $180M on $396M annual revenues. Not at all the rosy picture of $390M EBITDA "profit" that Kinder Morgan portrayed for the three fiscal years prior to the August, 2018 acquisition by the Feds. of about 60% of the revenue-generating assets of KM Canada (KM Canada retained the storage tanks and 6 loading terminals in Edmonton, the 10" Cochin condensate pipeline from the U.S border to Edmonton, the Vancouver wharves terminal in N. Van. and the jet fuel pipeline from Burnaby to Vancouver airport).

.. and the PBO just reported

.. and the PBO just reported that TransMountain LOST $36M in its first 7 months of operation under Federal Government ownership. So much for ever recovering the $4.5 Billion.