B.C. chief tells pipeline hearings his people are responsible for their land 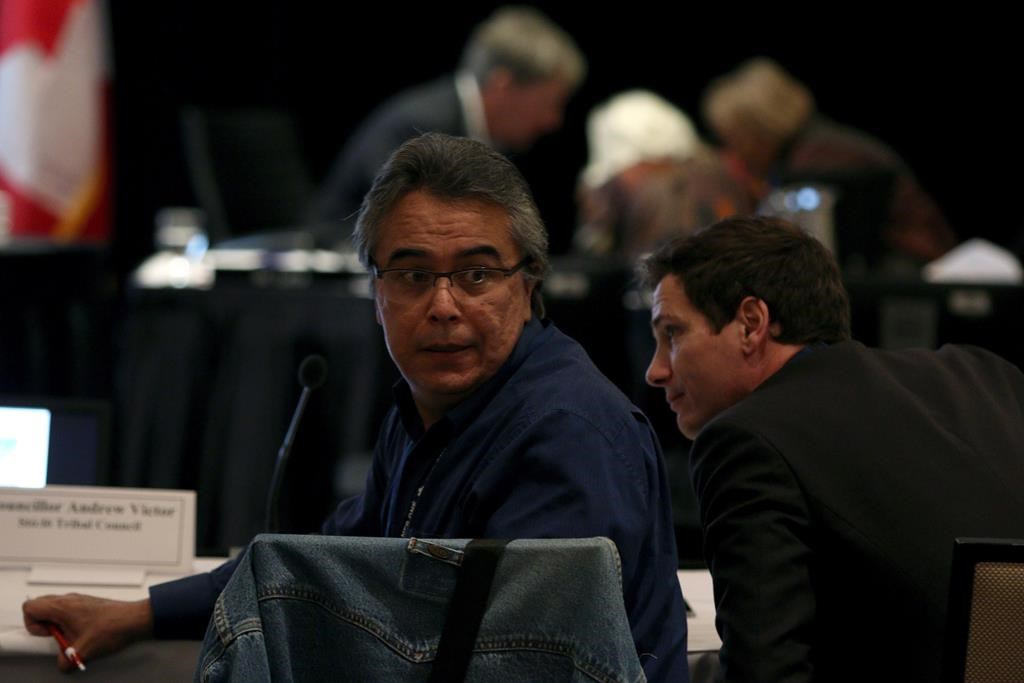 Sto:lo Tribal Chief Tyrone McNeil looks back as lawyer Tim Dixon looks on as Members of the NEB consult during a question period to listen to traditional evidence from Indigenous groups in Victoria, B.C., on Nov. 26, 2018. Photo by The Canadian Press
Previous story
Next story

Protection of salmon, animals and the land in the Fraser Valley of British Columbia is an eternal responsibility of First Nations and the expansion of the Trans Mountain pipeline poses risks that could harm the homes and culture of Aboriginal Peoples, the National Energy Board heard Monday.

But Chief Tyrone McNeil of the Sto:lo Tribal Council and councillor Andrew Victor of the Cheam First Nation did not say they are completely opposed to the expansion project as the board began hearings in Victoria.

Victor said the Sto:lo, which includes the Cheam First Nation, want to see grounds for the pipeline expansion project, including the completion of environmental assessments that examine the risks and impacts of a spill.

The council also wants to be part of ongoing consultations and environmental assessments, he added.

"We need to see justification," said Victor. "The Sto:lo face uncertainty with the project's impacts to our way of life. We want to see it done right."

After he testified, McNeil said: "In our tribal council, some of our communities support it, others don't."

The hearings in Victoria will gather evidence from Indigenous groups about the pipeline expansion project and its potential impact on the marine environment. The board was in Calgary earlier this month and will hold hearings in Nanaimo, B.C., from Dec. 3 to 6.

The new hearings are being held after the Federal Court of Appeal quashed the original approval for the expansion, saying the federal government didn't adequately consult with First Nations or consider the impact of tanker traffic on the marine environment.

The board says 30 Indigenous interveners from B.C., Alberta and the United States will participate in the hearings in Victoria.

McNeil told the board the Sto:lo call the Fraser River their mother because it feeds and nurtures them.

"We've been here since the start of time," said McNeil. "We're going to continue to be here. That's why we're here this morning, for us to continue to look after what's important to us."

He said the Sto:lo believe they are responsible for looking after everything they see, including the Chinook salmon, the main food source for threatened southern resident killer whales.

"Part of this conversation needs to be what safeguards are in place to start a project like this," McNeil said. "When we say everything, that's in English the land, that's the water, that's the air, that's the four-legged, the winged, the crawlers, the diggers, everything. Whether they are human or not, we've got a responsibility for it."

The federal government announced last May it would spend $4.5 billion to buy the Trans Mountain pipeline from Kinder Morgan. Expansion of the pipeline would triple the capacity of the line from northern Alberta to Burnaby, B.C.

The KISS principle says that

The KISS principle says that there is NO WAY to drag muck that Mother Nature has buried - making life on this planet possible - through a pipe, and at the same time protect life!!! The two concepts are INCOMPATIBLE!!! So can we PLEASE keep it simple and KEEP IT IN THE GROUND??!!!