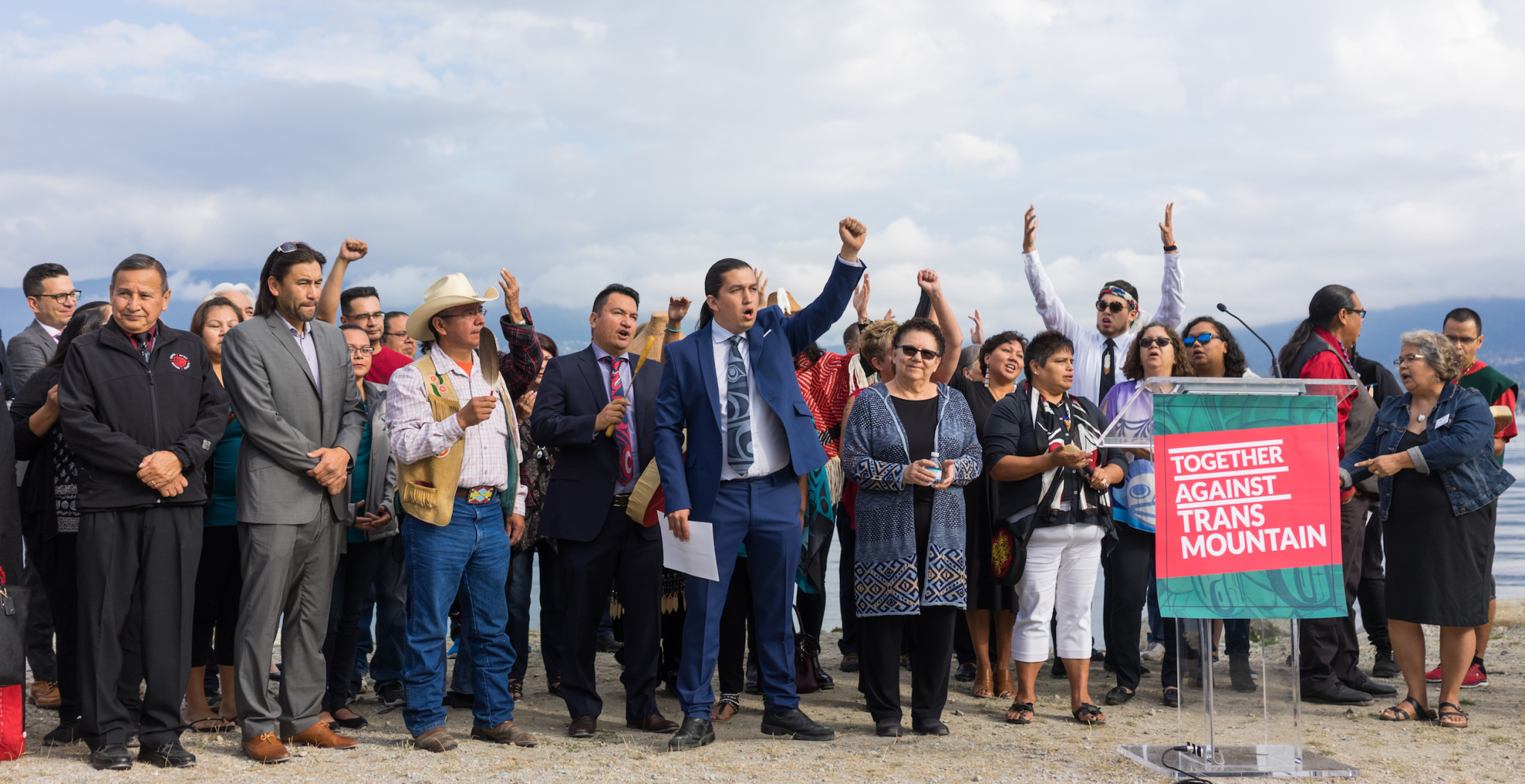 As First Nations leaders celebrated following a stunning Federal Court of Appeal decision that quashed the construction permits and approval of the Trans Mountain oil pipeline and tanker expansion project, the chief of the nation that spearheaded the legal challenge highlighted what the case meant to her people.

"We're not trying to fight, we're trying to survive," Chief Maureen Thomas from the Tsleil-Waututh Nation said to a crowd of journalists and spectators gathered for the press conference at Crab Park. "We're not here to fight. We're here to protect what we need to protect for future generations."

The Tsleil-Waututh Nation was the lead opponent of the project in the legal case, arguing in court that the federal government failed to adequately consult them before it gave Trans Mountain the green light in November 2017. Thomas said the pipeline expansion would not only damage her nation's way of life, but it would have impacts for everyone else as well.

She explained that opposition to the Trans Mountain pipeline was not to create division, but to protect the wellbeing of her grandchildren and those not yet born.

​​A three-member panel at the court unanimously agreed on Thursday that the Trudeau government had failed in its duty to consult, as required by the Constitution, ordering it to refer the matter back to its regulator and then restart its consultations with First Nations before proceeding with the Trans Mountain expansion.

The news came as a shock to even those most intimately involved in the case. Only a few months earlier, the court had rejected efforts of several of these nations to get new evidence admitted and considered by the justices who heard the case. These requests were prompted by an investigation by National Observer that found public servants had been instructed to get the project approved, before they concluded their consultations with the affected First Nations.

Following the announcement, representatives of the Tsleil-Waututh Nation, the Squamish Nation, and other First Nations spokespersons spoke at the press conference.

Many of them said that the court decision could be a paradigm shift for Indigenous rights in Canada.

Holding up an eagle feather, Chief Lee Spahan from the Coldwater Indian Band reminded the crowd that his nation's struggle is for the protection of their water.

"We have always said, water is life, water is sacred," said Coldwater Indian Band Chief Lee Spahan. "Nothing can survive without water. The fight carries on and we will always be there, standing up for our water."

"We have always said, water is life, water is sacred," he said. "Nothing can survive without water. The fight carries on and we will always be there, standing up for our water."

Project manager for the Tsleil-Waututh Sacred Trust Initiative, Rueben George asked the crowd to remember the smoke covering the city for the last month, emphasizing the increasing threat of climate change.

"Look outside and see the smoke. We have to do something now. Our water is valuable now. Our lives and families are valuable now," he said. "We have the worst air quality in the world. Brave people stood up and did something for their future generations. We deserve the victory."

Stewart Phillip, Grand Chief of the Union of B.C. Indian Chiefs (UBCIC) said that he was not anticipating the nature of the press conference, one of joy and celebration. He thanked and acknowledged the people who stood on "the right side of history" on behalf of all 15 of his grandchildren.

"The future of our grandchildren depends on our ability and courage to stand up and defend the land and the water," he said. "That's what we're seeing unfold here."

The Aug. 30 ruling requires the Trudeau government to restart its consultations with First Nations about the project, before construction can proceed. The decision also requires the federal government to ask the federal energy regulator, the National Energy Board, to redo a federal environmental evaluation and correct a “critical” mistake it made in ignoring the consequences of increased oil tanker traffic off the coast of British Columbia.

"They have to go back to square one and redo the entire thing, which will cost millions of dollars," Grand Chief Phillip said. "It's a consequence of the unholy alliance of the government and the resource sector who take shortcuts to get to a 'yes.' My faith in the judicial system has been somewhat restored, but this isn't my first rodeo. This fight will continue, until we can stand back and say that B.C. is off limits for toxic resource development projects that do not respect the land and waters of B.C."

The court ruling also criticized the federal government for failing to address mistakes made by the National Energy Board when it reviewed the project and excluded information about threats to the B.C. coast, as required by law.

"The National Energy Board process was flawed from the start and the courts recognized that today." said Rueben George. "The victories today were won on facts. On Science. Based on our Indigenous laws."

If the government wants to appeal the decision in the Supreme Court of Canada, George said the Tsleil-Waututh Nation is ready.

Khelsilem, a Councillor of the Squamish Nation agreed.

"This government played politics with our livelihood," he said during the conference. "Their consultation process was note-taking, they did not meaningfully address our concerns. For years, Trudeau has been standing by their consultation plan. It failed. And the courts agreed with us."

In an interview with National Observer following the news conference, Khelsilem said the Squamish Nation will wait to see how the government will respond before deciding how to move forward.

"The way this project has been put forward and the way the government has behaved - nothing has been to our standards," he said. "Our people fought for section 35 in the Canadian constitution. Canada is a nation of laws and today the law that respect Indigenous rights has been upheld."

Regardless of the direction the government decides to take, Chief Grand Stewart Phillip called today an "undeniable paradigm shift" for the rights and title of Indigenous interest in the country in an interview with National Observer reporter Michael Ruffolo. "Indigenous consent is a reality."

A spokesperson for the B.C. Ministry of Indigenous Relations and Reconciliation upheld the court's decision and said in an email response that First Nations jurisdiction needs to be acknowledged and respected through meaningful engagement by government and industry.

"We are committed to moving away from a cycle of endless litigation, and onto a path that is equitable, fair and respectful of the rights and jurisdiction of First Nations, as well as case law, including the Tsilhqot’in decision," wrote Sarah Plank. "The Province is committed to building relationships with First Nations that are based on respect and the recognition of rights, which is fundamental to true and lasting reconciliation."

This article was updated at 8:50 a.m. PT on Aug. 31, to include a statement from the B.C. Ministry of Indigenous Relations and Reconciliation

In spite of Trudeau's,

In spite of Trudeau's, Morneau's and Notley's desperate hyped up rhetoric, this another huge nail in their pipe dream's coffin. But as these courageous FN leaders said, they and all of us allies, are ready to keep fighting it is rightfully buried for good!

"The future of our

That's the simple truth. Time a lot more settler Canadians signed on...we've done enough damage. Now is the time to turn to restorative agriculture and sustainable silvaculture. Now is the time to consider we all could be native to this place we call home. To achieve that, we're going to have to substitute a culture of care for the current culture of extraction and export driving markets.

In truth, we have no other choice. The good news is, there are many people already working to make it happen....and there's so much to do, there will be jobs for all of us. Real jobs, ones that don't have to trash the commons to create private wealth. Transition now.