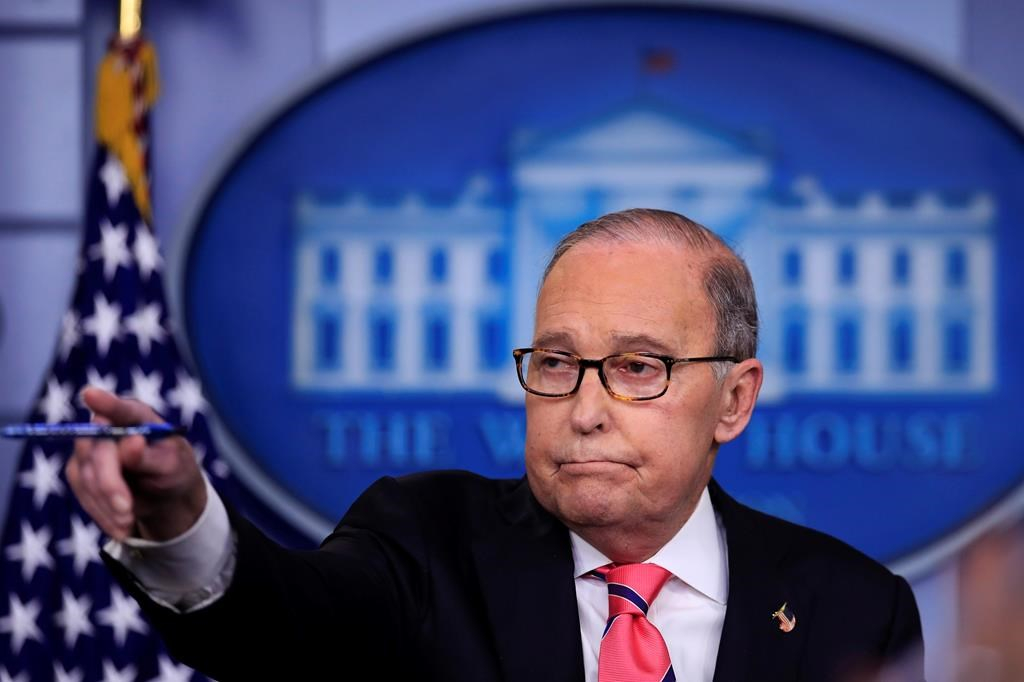 National Economic Council Director Larry Kudlow speaks to reporters during the daily press briefing in the Brady press briefing room at the White House in Washington, on Tuesday, Nov. 27, 2018. Photo by The Associated Press/Manuel Balce Ceneta
Previous story
Next story

Donald Trump tweeted a warning shot across GM's front bumper Tuesday, threatening to pull all U.S. subsidies for America's largest automaker if its plans to slash jobs and production at North American plants prove to be a precursor to building interconnected electric cars in China.

The U.S. president's senior economic adviser was in the middle of a White House briefing when Trump delivered his latest broadside, a full 24 hours after General Motors announced plans to cut more than 14,000 jobs and end production at five plants, including one in Oshawa, Ont.

"The U.S. saved General Motors, and this is the THANKS we get!" Trump tweeted, noting that GM facilities in both China and Mexico appeared to escape unscathed. "We are now looking at cutting all GM subsidies, including for electric cars. General Motors made a big China bet years ago when they built plants there (and in Mexico) — don't think that bet is going to pay off. I am here to protect America's Workers!"

The company said the cuts — 2,500 jobs in Oshawa, GM's Canadian heartland, as well as 3,300 production workers in the U.S. and 8,000 salaried staff — are part of a dramatic course correction aimed at better positioning GM for the dominance of electrified, interconnected and automated automobiles.

But it was hard to miss the fact that the bulk of the U.S. cuts came in the Midwest Rust Belt, a region that was instrumental in elevating Trump and his jobs-promising, "America First" agenda to the White House in 2016.

They also cast a pall over this week's signing of the U.S.-Mexico-Canada Agreement, the hard-won successor to NAFTA that Larry Kudlow, the director of the National Economic Council, acknowledged Tuesday was designed to foster the growth of the auto sector.

"(Trump) believes — as, frankly the prime minister of Canada, (Justin) Trudeau, believes — that the USMCA deal was a great help to the automobile industry and to auto workers," Kudlow told a White House briefing.

"There's disappointment that it seems that GM would rather build its electric cars in China than the United States, and we are going to be looking at certain subsidies regarding electric cars and others, whether they should apply or not."

What that would look like wasn't immediately clear: electric vehicles are eligible for a US$7,500 federal tax credit, but neither the president nor Kudlow provided additional details as to whether that's what they're reconsidering.

Kudlow did make it plain, however, that the White House expects the USMCA to be signed, as planned, by all three countries when G20 leaders gather later this week in Buenos Aires. That largely ceremonial step has been uncertain as Canada and Mexico seek an end to their standoff with the U.S. over steel and aluminum tariffs.

Mexico has been unequivocal, saying it will not put pen to paper as long as U.S. levies on Mexican exports of the metals are still in place.

Canada has been more conciliatory: "Our objective very clearly has always been to get to a Nov. 30 signing. That's what we're working towards," Foreign Affairs Minister Chrystia Freeland said Tuesday.

"All the indications from the Canadian federal government is that we’re on target for a signing this week. I haven't heard otherwise," said Flavio Volpe, president of the Canadian Automotive Parts Manufacturers Association.

Meanwhile, it's a fallacy to suggest that the new deal could have either prevented or ended up expediting the cuts, said Dan Ujczo, an Ohio trade lawyer who hails from Lordstown, the same community outside Cleveland that's home to one of the five GM plants where production is to cease next year.

Rather, the cuts are entirely about General Motors preparing for what industry experts agree will be a difficult and challenging future for old-school automakers, and doing so at a time when its balance sheet is relatively healthy and the company has room to manoeuvre, he said.