Garneau says rail safety is 'No. 1 priority' as Alberta plans to put more oil on tracks 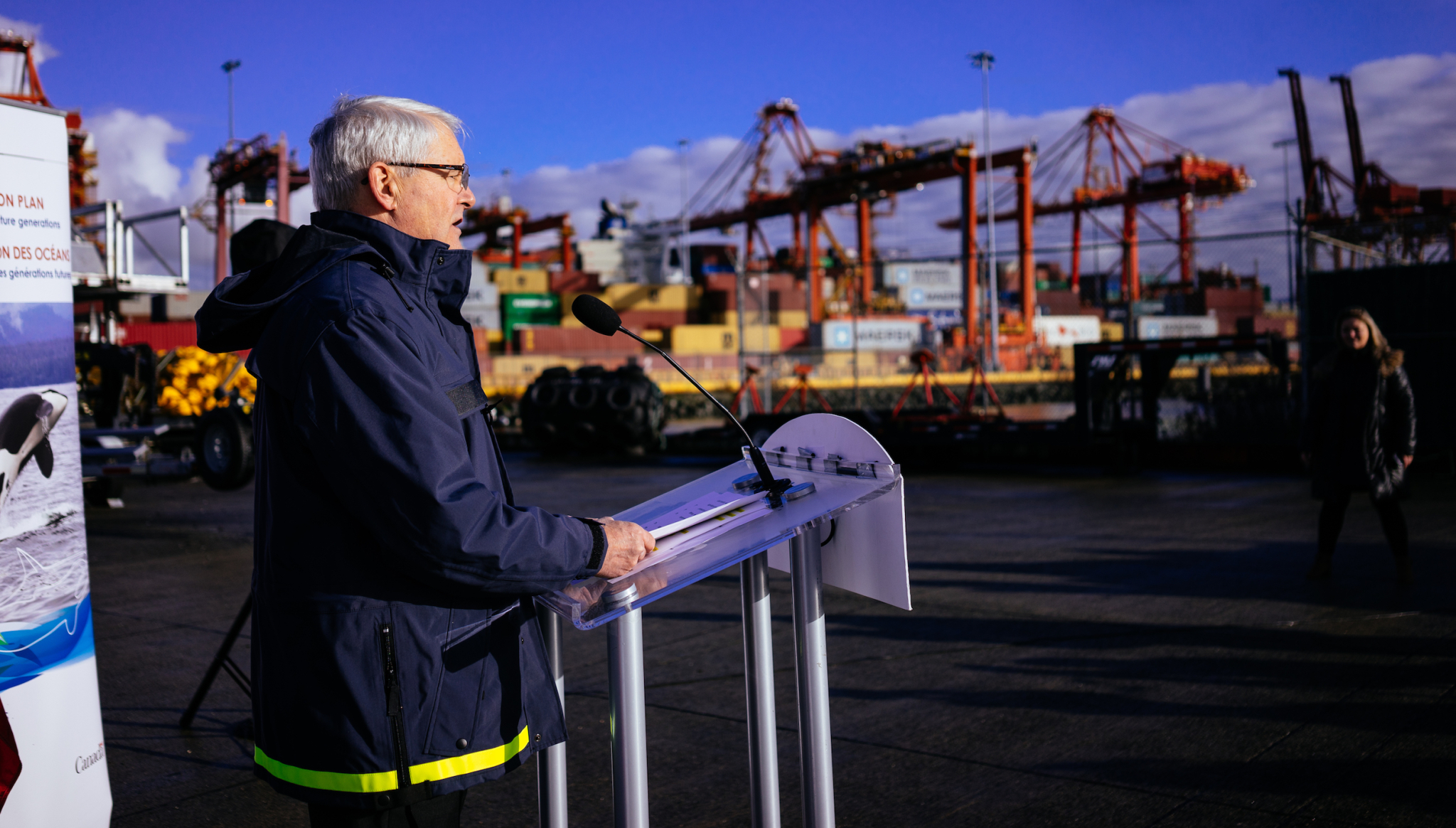 As Alberta Premier Rachel Notley continues to pitch for more trains to carry 120,000 additional barrels of oil out of the landlocked province, Transport Minister Marc Garneau says Canada's rail system has become safer since a deadly train derailment, oil spill and explosion in Lac-Mégantic, Que. in 2013.

Garneau was in Vancouver to announce Oceans Protection Plan funding when he was asked by National Observer what he would tell residents along rail lines who may be concerned about the risks of trains carrying more oil.

"We have put in place a very large number of measures to improve railway safety, and some specifically targeted at the movement of oil products by rail," Garneau said, including retiring older models of tank cars and adding speed restrictions "when dangerous materials are being carried."

The government is also working to curb fatigue among locomotive conductors, install voice and video recorders inside locomotives, and the minister said local first responders are informed if an incident occurs as a train passes through their community.

"A lot of this was motivated by what happened at Lac-Mégantic in 2013, but I can tell you that … rail safety is my No. 1 priority," Garneau said.

Part of Lac-Mégantic's downtown was destroyed and 47 people were killed as a result of the derailment. The train was carrying crude oil from the Bakken Formation — named after a farmer from North Dakota — which is considered to be more volatile than the heavy bituminous oil found in Alberta's oilsands.

Notley has asked Prime Minister Justin Trudeau's government to co-invest in new trains to carry oil out of the province while the Trans Mountain pipeline expansion – purchased this year by the federal government for $4.5 billion — is delayed.

Speaking to a business group in Ottawa on Wednesday, Notley acknowledged moving oil by rail is not a long-term solution, and blamed pipeline opponents for "driving more oil to rail." She said the new trains were necessary to transport more oil each day and help narrow a pricing gap that her government says is costing the province $80 million a day — an estimate that is believed to be incorrect according to a recent analysis by economist Robyn Allan.

But to avoid any further losses, Notley said Thursday Alberta wants to purchase as many as 7,000 new rail cars.

Garneau said the federal government has received Notley's request and is "examining" it.

"We don't have an answer at this point," he said. "We very much understand the situation that Alberta is in and their lack of pipeline (capacity) and their desire to move more oil. ... As minister of transport, I have to, of course, look at the railway system's capability to move all commodities in this country, (including) grain, forestry products, potash containers and all of that."

His comments follow recent remarks by Finance Minister Bill Morneau who suggested it would take several months to implement such a plan.

Until pipelines are built, the fact is, we need to move more oil by rail.
And that's what we're going to do - buy enough rail capacity to move 120,000 more barrels/day. It would mean running 7,000 rail cars/day.
A pipeline would be better but - here we are.#KeepCanadaWorking pic.twitter.com/vJBAdUzUX0

Allan, a former chief executive officer of the Insurance Corporation of British Columbia, has questioned whether the impact of the pricing gap has been exaggerated, and some companies with refining and upgrading capabilities are reporting profits, undermining the link between lack of pipelines and lost revenues.

Asked how many barrels of oil, or what percentage of barrels of oil produced, are affected by the pricing differential, Mike McKinnon, a spokesman for Alberta Energy Minister Marg McCuaig-Boyd said, "All oil produced in Alberta is impacted by price differentials that vary depending on where the oil is sold."

In a written response to National Observer questions, McKinnon said some companies may have contracts to sell oil to different markets. From the provincial government's perspective, however, "royalties in the oilsands are largely calculated based on the price of Western Canadian Select, which means government revenues are bearing the full brunt of the price differential impacts on all barrels produced, regardless of where it is sold."

Has anyone given any thought

Has anyone given any thought to transporting raw bitumen instead of dilbit? Raw bitumen doesn't explode in an accident, and it doesn't catch fire. It can be transported similarly to how coal used to be transported by rail.

To carry raw bitumen by rail

To carry raw bitumen by rail in winter, you're gone need to find a way to keep raw bitumen warm, otherwise it will become rock solid.

Isn't that the point?

Isn't that the point?

I want to know what is meant

I want to know what is meant by the word ‘safer’ in this context.

Rachel, spend your time and

Rachel, spend your time and money on refineries for the "oil" that you insist on digging up; and training workers for renewable energy jobs. Stop fussing about the industry that used to be.