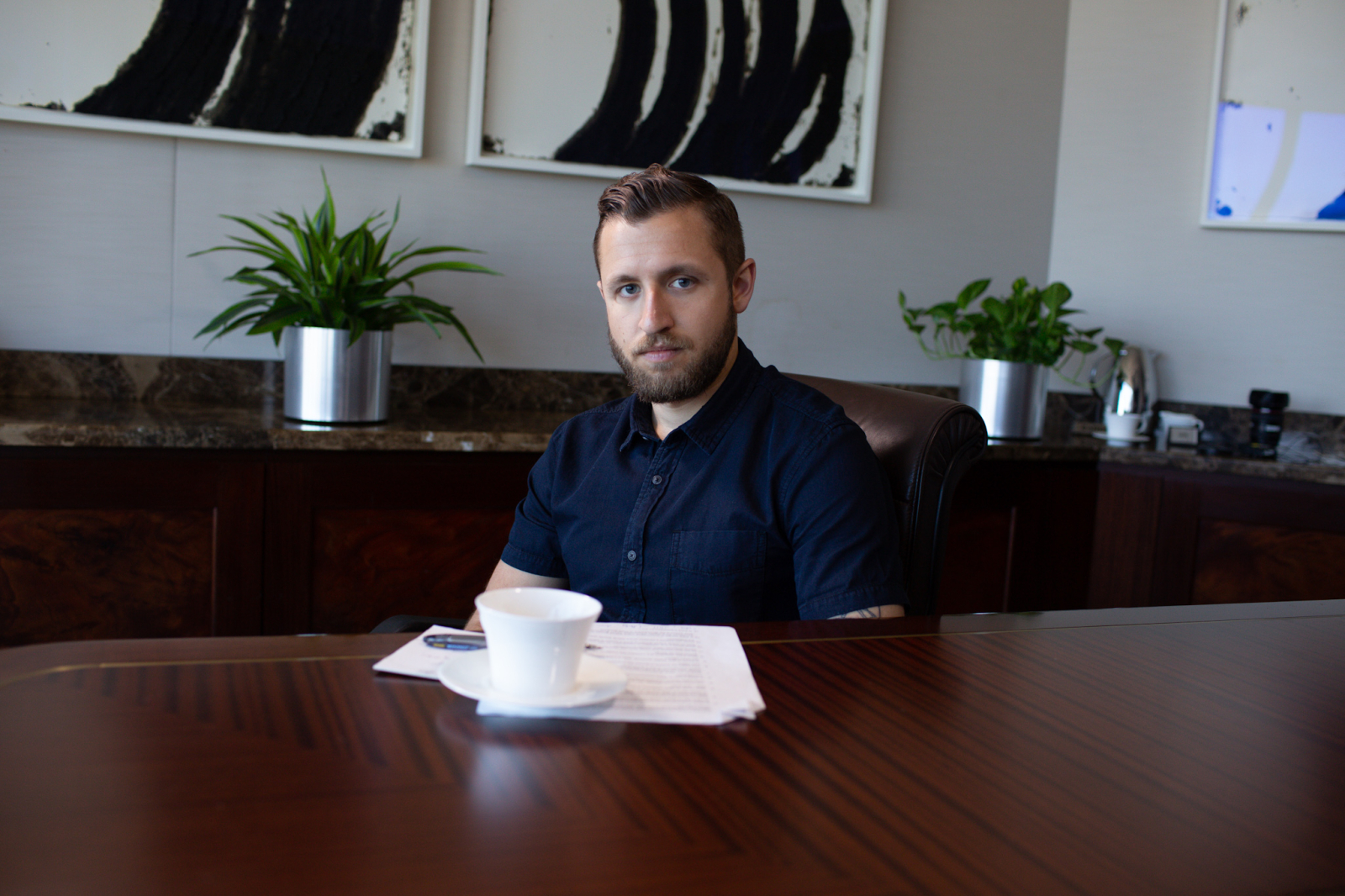 Vice Media reporter Ben Makuch has lost his case at the Supreme Court of Canada, after a long legal battle that raised serious questions about freedom of the press.

The Court unanimously upheld an order that Makuch must hand over to police the copies of the conversations he had with Farah Shirdon, originally of Calgary. Shirdon had said he became involved with the Islamic State of Iraq and the Levant.

Vice had argued in court that journalists should not be exploited by police as an investigative service. But Canada's federal police force, the RCMP, wanted evidence to conduct their investigation.

The Court sat with the full complement of nine judges on May 23, 2018 and all determined that the appeal should be dismissed, and that Vice had to give police screenshots of the conversations. They said the production order from the police was "properly issued" and should be upheld.

"The suggestion that the production order would interfere with Vice Media's newsgathering and publication functions shrivels in a context where the source was not a confidential one and wanted everything he said to be made public," wrote Justice Michael Moldaver, who signed the decision with Justices Clément Gascon, Suzanne Côté, Russell Brown and Malcolm Rowe in agreement.

"Crucially, there is no suggestion that anything the source said was intended or understood to be 'off the record.' The journalist's own conduct shows that the relationship was not confidential in any way. Accordingly, the benefit of the state's interest in obtaining the messages outweighs any harm to Vice Media's rights."

In its deliberations, the Court did not engage the Journalistic Sources Protection Act that the Trudeau government enacted in 2017. That law aims to shield confidential sources from investigations by the police. The facts of the case did not involve this law, because they happened before it came into force, however it is likely to govern these types of cases going forward.

"I am profoundly disappointed in today’s ruling, not just as an appellant in this case or a reporter, but as a citizen of Canada," Makuch said in a statement posted on Twitter, a few hours after the ruling was released. "It is truly a dark day for press freedom around the globe at a time where journalism is unquestionably under attack everywhere."

Judges must balance state with 'vital role' of media

Section 487.014 of the Criminal Code allows production orders "ex parte" or without the person involved. There must be reasonable grounds to believe that the offence was committed or will be committed, that evidence is in the other person's possession, and that it will provide evidence of the offence.

“This Is a dark day for press freedom,” Vice wrote in an editorial response to the ruling. @NatObserver reporter @OttawaCarl reports on a stunning ruling by the Supreme Court of Canada #cdnmedia #cdnpoli #cdnfoi #SCOC

A major case in 1991, Canadian Broadcasting Corp. v. Lessard, added a common law framework governing issues of production orders when it is the media producing documents. Judges consider nine factors in that framework, structured around balancing the interests of the state and press freedom. Vice had argued the Lessard ruling was merely a rubber stamp to allow police to get what they want.

The Court disagreed, saying the framework set out in the Lessard ruling, and another case in 1991, "continues to provide a suitable model for considering applications for search warrants and production orders relating to the media and provides adequate protection to the media and the special role it plays in Canadian society."

However, the Court said certain aspects of that framework should be tweaked to allow the Lessard factors to be applied easier in practice. It ruled that on an application for a production order against the media, the judge should apply a "four-part analysis."

One of these includes a responsibility of the judge to "balance the state's interest in the investigation and prosecution of crimes and the media's right to privacy in gathering and disseminating the news."

In considering this, the judge should take circumstances into account, such as "the likelihood and extent of any potential chilling effects" and the scope of materials sought, as well as "the vital role that the media plays in the functioning of a democratic society, and the fact that the media will generally be an innocent third party."

The judge should also exercise "discretion" whether to give notice to media about such cases being pursued in court, and take factors like emergency circumstances into consideration.

Third, the judge should consider imposing conditions on the production order "to ensure that the media will not be unduly impeded in the publishing and dissemination of the news." Finally, all statutory predictions in the Lessard framework must be met in order to proceed.

Public Safety Minister Ralph Goodale said the court had “handed down an important ruling” on Friday and the government will “take the time necessary to study it carefully," according to a statement from Goodale's senior advisor for communications Scott Bardsley that was sent to National Observer.

The media’s need to be free to pursue its work is a critical priority — as well as the need for police and “security agencies” to keep Canadians safe, the statement read. “The intersection between the two is crucial to our democracy. That's why a unanimous ruling of the Supreme Court of Canada is ‎so significant. We all need to examine and understand the Court's analysis.”

On Parliament Hill on Friday, Mélanie Joly, federal minister for tourism, official languages and La Francophonie, said the government hadn't had a chance to fully study the ruling, but reiterated that the protection of journalistic sources is important.

"We always want to strengthen a free and independent press," she said, pointing to the shield law, as well as the government's introduction last week of new tax incentives of roughly $600 million over five years for media. The government also said it would put in a place a panel of journalists to hammer out standards and eligibility for these benefits.

"We believe in having a strong free and independent press and therefore we will continue to abide by these principles. As to the particular facts of this case, obviously I don’t have any comments as of now because I haven’t had the chance to read it."

The office of Justice Minister Jody Wilson-Raybould declined to answer questions from National Observer on the ruling.

Conservative MP Gérard Deltell, a former TV journalist from 1989 to 2008 including as a political reporter at the National Assembly in Quebec City, told media outside the House of Commons in French that “situations like this are always delicate.” He said it affected everyone, both citizens and journalists.

“For the moment I’ll withhold comment because I just received the documents this morning,” he said. “As a former journalist, obviously each source needs to be protected, but you must never compromise yourself as a journalist with criminals. I was always very careful on this.”

Deltell pointed out that while the ruling itself was unanimous, there was a minority of justices who said they would have created a new test for production orders based on Charter of Rights and Freedoms protections.

NDP MP Alexandre Boulerice said the party has always defended freedom of the press and the ability of journalists to protect their sources. As for the Vice case, he said “maybe the RCMP has a real basis, and the Supreme Court has been unanimous, so probably there is something there.”

He also highlighted concerns the party had raised about the 2017 journalist shield law, saying that when the bill was being studied in Parliament, “a lot of witnesses were saying the actual legislation is not strong enough.”

@vicecanada decision by @SCC_eng deserves a parliamentary response via amendments to police powers and press freedom, says @MJ_Bryant. "That the majority refuses to recognize the constitutional right to press freedom is semantic insanity." #canpoli

“This Is a dark day for press freedom,” Vice wrote in an editorial response to the ruling. The media outlet described a “profound sense of disappointment” that “our society has failed to recognize the importance of a free and independent press.”

Reporters are already facing extraordinary difficulties doing their jobs at the present moment, with state-sponsored killings of journalists, fake news proliferating on social media and powerful people like U.S. President Donald Trump denigrating media as “the enemy of the people,” the news outlet noted.

“Today’s decision will no doubt have a chilling effect on both sources, who may be reluctant to talk to reporters, and on journalists themselves, who could be less inclined to report on sensitive issues,” added the editors.

RSF is alarmed by the Canadian Supreme Court’s decision today that upholds a lower court’s ruling compelling @vicecanada reporter @BMakuch to hand over to Canadian police all his communications with his source, an alleged Islamic State fighter. https://t.co/mEOnkpcPmv

The CAJ and @CJFE are deeply disappointed in the Supreme Court for striking a blow against press freedom in Canada. For 3 years, VICE reporter @BenMakuch fought an RCMP production order that sought Makuch's communications with an alleged ISIS terrorist. #cndmedia 1/8 pic.twitter.com/mvgPvTkPa8

CWA Canada, the union which represents over 6,000 media workers across the country including workers at Vice Canada, was part of a coalition that was granted intervener status.

President Martin O'Hanlon said in a statement that the union was “deeply disappointed” with the ruling and called the decision “bad news for freedom of the press and for democracy.”

“Police have an important job to do in protecting us from crime, but they cannot expect journalists to do that job for them. The media is not, nor should it ever be, an arm of the state,” said O’Hanlon.

“It is vital for free speech and democracy that journalists guard the anonymity of their sources. If not, sources, including whistleblowers, will be far less likely to talk to journalists knowing that they could be identified and punished. The result? Canadians will be blocked from important information and stories about matters of vital public interest.”

Are we becoming a Socialist

Are we becoming a Socialist Republic?