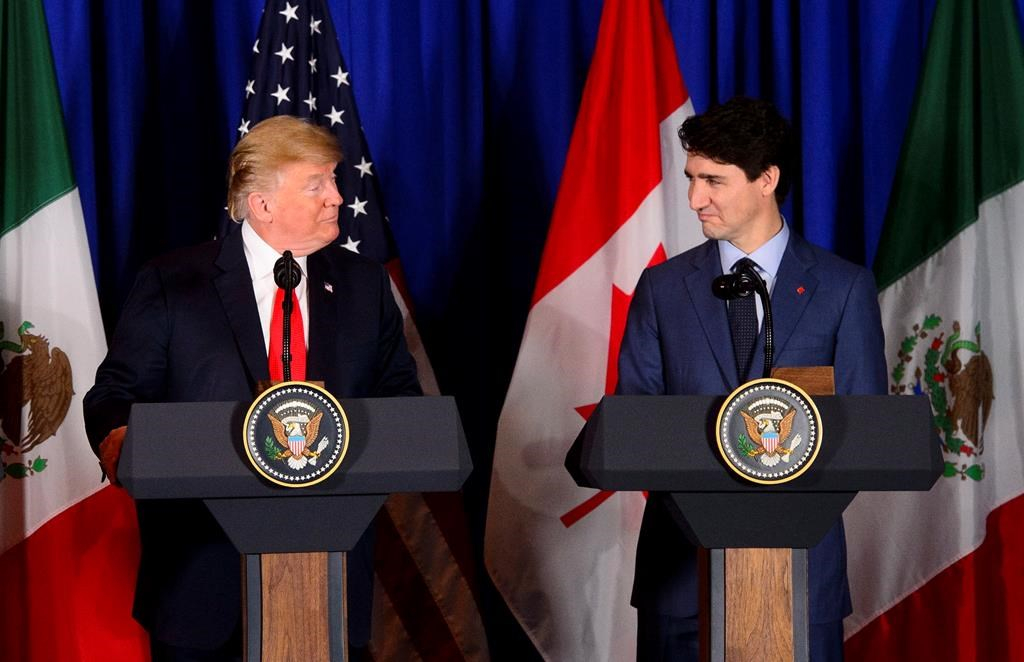 Prime Minister Justin Trudeau and President of the U.S. Donald Trump participate in a signing ceremony for the new USMCA with President of Mexico Enrique Pena Nieto (not shown) in Buenos Aires, Argentina on Nov. 30, 2018. File photo by The Canadian Press
Previous story

Initial analysis on the final text of the new North American trade pact Canada signed on Friday is pointing to two changes — one potentially helpful for the auto sector, the other potentially problematic for labour rights.

Canada, just like Mexico, signed what is known as a side letter — a one-on-one provision connected to, but not formally part of the trade deal text — on automotive imports. Canada will be able to export up to 2.6 million passenger vehicles into the United States tariff-free. The limit is well above current levels of about 1.8 million vehicles, and the country isn't forecasted to reach the quota until at least a decade from now, as vehicle production in Canada declines along with consumer demand, said Juan Manuel Herrera, an economist with Scotiabank Economics.

A change also specifies that tariffs won't apply to those vehicles even if they don't meet rules of origin provisions in the trade deal, which lay out continental content and labour requirements to be considered tariff-free.

"People were afraid that the side letters would also give power to the U.S. in how Canada decides how to allocate this 2.6 million exemption," Herrera said. "But ... the Canadian government, or Canadian firms, are the ones who will distribute this exemption as they see fit — it's not that the U.S. is the one who gets to pick."

Also of note: The side letter is effective immediately.

The original text of the agreement pledged all three countries to support "policies that protect workers against employment discrimination on the basis of sex, including with regard to pregnancy, sexual harassment, sexual orientation, gender identity."

But the final agreement has a change in language that various analyses suggest will water down its reach: The new wording calls on each country to implement policies each "considers appropriate to protect workers against employment discrimination on the basis of sex." A footnote on the agreement says American federal hiring policies "are sufficient to fulfil the obligations" on labour rights, and "thus requires no additional action" by the U.S.

Some congressional Republicans have already suggested they won't support the deal with any wording on sexual orientation or gender identity because they feel it goes too far. Critics who supported the original provision feel the new wording doesn't go far enough.

"Honestly, whatever you think of the LGBTQ provisions in the new NAFTA, this outcome — to include them but nullify them with a footnote — is ridiculous," tweeted Geoffrey Getz, a fellow at the Washington, D.C.-based Brookings Institution.

"It's the kind of thing that will make progressives even more suspicious of engaging with trade liberalization."