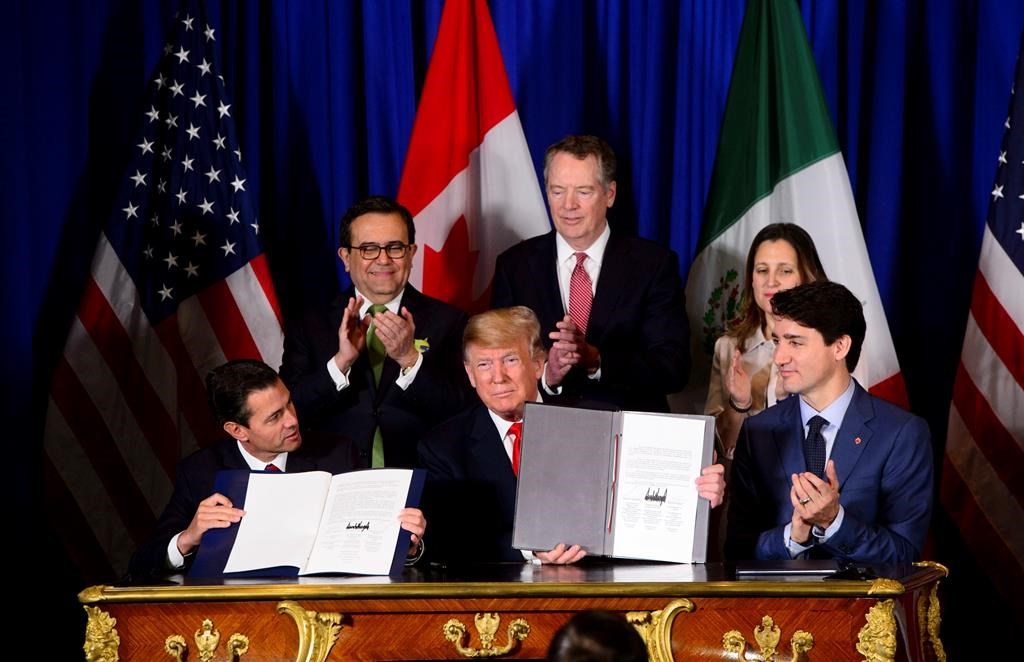 The original NAFTA deal has landed back atop Donald Trump's hit list, with the U.S. president again declaring he intends to terminate the 24-year-old trade pact — a move that appears designed to pressure lawmakers on Capitol Hill into approving its recently negotiated successor.

Trump, Prime Minister Justin Trudeau and former Mexican president Enrique Pena Nieto signed the new U.S.-Canada-Mexico Agreement — USMCA, although the federal government in Ottawa has rechristened it CUSMA — during an awkward ceremony at the outset of G20 meetings Friday in Argentina.

Trump was on board Air Force One on his way back to Washington late Saturday when he announced that he would notify Congress of his intention to terminate NAFTA, a long-threatened move that would give lawmakers six months to approve its replacement once formal notice is delivered.

"I will be formally terminating NAFTA shortly," the president said of the trilateral agreement he and his supporters have long loved to hate.

"I'll be terminating it within a relatively short period of time. We get rid of NAFTA. It's been a disaster for the United States. It's caused us tremendous amounts of unemployment and loss and company loss and everything else. That'll be terminated.

A number of Democrats in Congress, empowered by their new majority in the House of Representatives, say they don't much like the new agreement in its current form either, and say they won't support it without more stringent enforcement mechanisms for new labour rules and environmental protection.

Some Republicans say they, too, are disinclined to support the agreement in its current form.

Kristin Dziczek, vice-president of industry, labour and economics at the Michigan-based Center for Automotive Research, was not surprised to hear of Trump's decision, something he threatened several times during negotiations in an effort to spur progress and curry favour with his supporters.

"I don't think it's a bluff," Dziczek said Sunday. "I think that's how he thinks he's going to whip votes."

Dziczek said she's anticipates a scenario where Trump signs a formal intent to withdraw, but ignores the fact that congressional approval would be required to repeal the underlying legislation that enforces the terms of the original agreement — a scenario she's dubbed "zombie NAFTA."

"I think it's really, really likely we end up in that situation," she said. "Without this, he's got little leverage over Congress, and Congress has got detractors on both sides — on the Democrat and the Republican side — who don't really like the deal."

Massachusetts Democrat Elizabeth Warren, a member of the Senate Armed Services Committee and one of more than a dozen names believed to be eyeing a presidential run in 2020, has added her name to the list of lawmakers who say they won't support the new agreement.

She cited a lack of enforcement tools for labour standards, drug company "handouts" and a lack of sufficiently robust measures to cut pollution or combat climate change, particularly in Mexico — and her refusal to use the deal's new name hinted at precisely why Trump wants to do away with the old one.

"For these reasons, I oppose NAFTA 2.0, and will vote against it in the Senate unless President Trump reopens the agreement and produces a better deal for America's working families."

Among the Republicans who see problems is Florida Sen. Marco Rubio, who tweeted his fears that the current agreement gives agricultural producers in Mexico an unfair advantage.

"As currently drafted this deal will put Florida seasonal vegetable growers out of business," Rubio wrote. "It allows Mexico to dump government-subsidized produce on the U.S. market.

"Going forward America will depend on Mexico for our winter vegetables. Unacceptable."

In a blog entry posted shortly after the agreement was signed Friday, Cato Institute trade analyst Simon Lester appeared to anticipate Trump's move — although he acknowledged it would have made a lot more sense if the Republicans still had control of Congress.

"The Democrats are in a different position," Lester wrote.

Shortly after Friday's signing, U.S. Trade Representative Robert Lighthizer insisted that the deal was negotiated with bipartisan support from both Democrats and Republicans, and expressed confidence it would survive the congressional approval process.

"I think we will get the support of a lot of Democrats, a very high number of Democrats, absolutely — I have no doubt about it," Lighthizer said. A number of the their concerns will be addressed in the implementing legislation that will have to be brought forward for ratification, he added.

"We’re moving forward with our own process now that the new NAFTA has been signed," Adam Austen said.

Now that it's been signed, reopening the deal is a non-starter, Dziczek said.

What's more likely is months of political horse-trading as Democrats and Republicans alike make their support contingent on other political initiatives, such as the controversial Deferred Action for Childhood Arrivals policy, which protects illegal immigrants who arrived in the U.S. as children.

Canada on track for Friday signing of USMCA once details finalized: Freeland