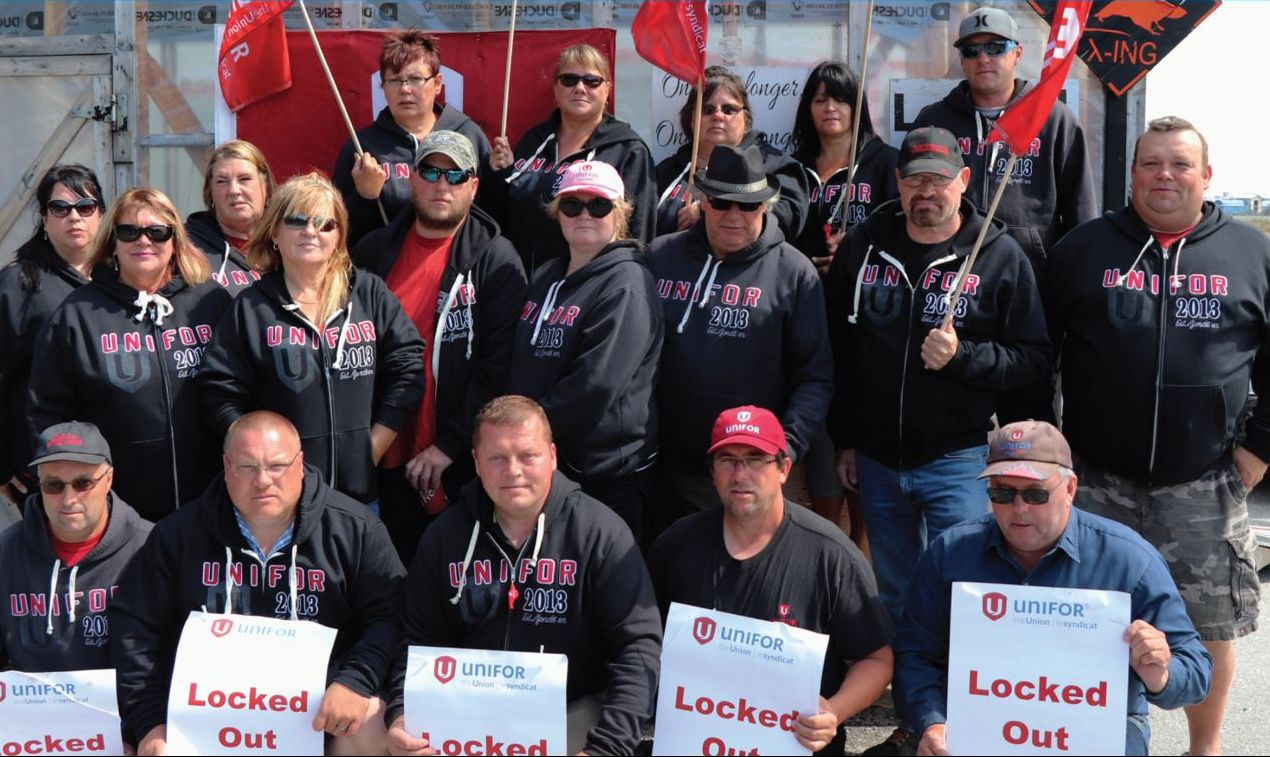 Members of Unifor Local 597, shown on their union Facebook page during a lockout by aerospace firm D-J Composites in Gander, N.L. that ended this week. Photo by Unifor
Previous story
Next story

Just before Christmas in 2016, aerospace company D-J Composites locked out about 40 workers in Gander, Newfoundland and Labrador. The longest lockout in the province’s history ended this week.

During the lockout, the provincial Labour Relations Board found D-J Composites, a Kansas-based firm, violated labour legislation twice and was guilty of bargaining in bad faith bargaining. The Newfoundland and Labrador government didn’t sanction D-J Composites. They didn’t intervene either, until Canada’s largest private sector union, Unifor, organized direct action at the plant. It was Sept. 26, 2018, day 646 of the lockout. Hundreds of workers descended on Gander from across Canada. They erected a blockade and shut the plant down.

The union representing the locked out workers, Unifor 597, Unifor National and union representatives Jerry Dias and Lana Payne were fined more than $150,000 for organizing the action. The parties agreed to donate $100,000 of this fine to local charities. But it was also a turning point: it forced the government to finally intervene. Their intervention resulted in the parties agreeing to binding arbitration.

The lockout at D-J Composites is an important illustration of the state of modern industrial relations in Canada. Many unions are returning to direct action to force governments to change course: to either intervene when a company is engaging in bad faith bargaining, or to stop legislation that circumvents workers’ right to strike and force an end to labour action before a contract is reached.

At the heart of Canada’s labour relations regime is the goal of labour peace: workers and management participate in negotiations in such a way that ensures tempers on either side remain cool. The goal is to avoid strikes and lockouts through collective bargaining in good faith.

This regime grew from a labour dispute at a Ford plant in Windsor, Ontario in 1945. Ford announced that 1500 workers would be laid off. The United Auto Workers (a precursor union to Unifor), represented 14,000 workers and thousands more at other auto factories in Windsor.

Workers fought the layoffs and demanded mandatory dues collection by Ford. They organized protests that included a three-day blockade at the plant. What followed was a court decision in early 1946 that would become known as the Rand Formula, which created the basis of Canada’s closed-shop unionism and modern labour relations.

The Canadian Labour Congress describes Justice Ivan Rand’s decision as one that would “foster labour peace and a harmonious labour relations climate in Canada.”

Labour peace has, generally, been achieved. Few negotiations go as far as a strike or a lockout and the numbers are falling. In 2018, there have been fewer than 200 strikes, compared to more than 400 strikes in 1998.

But for peace to work, labour law must be respected. For the D-J Composite workers, that would have meant pressure from government when the company was found to be bargaining in bad faith.

As governments have failed to uphold their side of the #labour peace bargain, workers have turned to civil disobedience to defend themselves, writes @NoLore. Is it the way of the future? #Unifor #CUPW #CdnPoli

It also means that governments should not impose back-to-work legislation to circumvent negotiations. If a corporation believes that a government will force an end to a strike, what interest does the corporation have to bargain at all?

This is the context in which Canadian postal workers find themselves. After weeks of rotating strikes that slowed but didn’t stop mail service, the federal government legislated them back to work on Tuesday, Nov. 27, making their rotating strikes illegal. This is the second set of negotiations in a row that the government has ended postal worker strike action with legislation.

Back-to-work legislation is increasingly used to intervene in labour disputes. Between 1982 and 2017, the federal and provincial governments have used back-to-work legislation 92 times; far more than between 1946 and 1982. In 2012, the Ontario government interfered in collective bargaining related to more than 200,000 educational workers through preemptive legislation that imposed a contract and forbade work actions like strikes. A Superior Court judge fined the Ontario government more than $100 million for violating educational workers’ rights to collectively bargain, but the imposed contract remained intact.

In 2017 alone, legislation intended to circumvent bargaining was introduced six times: twice in Nova Scotia, twice in Manitoba and once each in Ontario and Québec.

The Canadian Union of Postal Workers has respected the government’s legislation. They have not called for their members to continue their rotating strikes in an act of civil disobedience. But unlike the last time they were legislated back to work, other workers have taken up the struggle. Workers are picketing mail distribution centres across Canada, in a clever way to lessen the sting of back-to-work legislation. Canada Post has won several injunctions allowing them to remove picketers.

As governments have failed to uphold their side of the labour peace bargain, workers have turned to civil disobedience to defend themselves. The increasing use of back-to-work legislation indicates that the post-war period of labour peace in Canada may soon be over. As government power shifts more to defend the rights of corporations to do business how they want, regardless of union demands, there will be a rise in worker civil disobedience. Governments and corporations would be wise to think deeply about the implications of their actions.

Despite having made tens of billions in profits this year, General Motors recently announced that it plans to massively restructure and close its plant in Oshawa, Ont. Auto workers have vowed to fight this closure. Will GM workers win their fight within the legal regime that auto workers won generations ago? Or will they pave a new foundation for labour relations in Canada for the next several decades?

This column was updated Dec. 6 at 657pm ET to clarify that binding arbitration was agreed by the parties, not imposed.