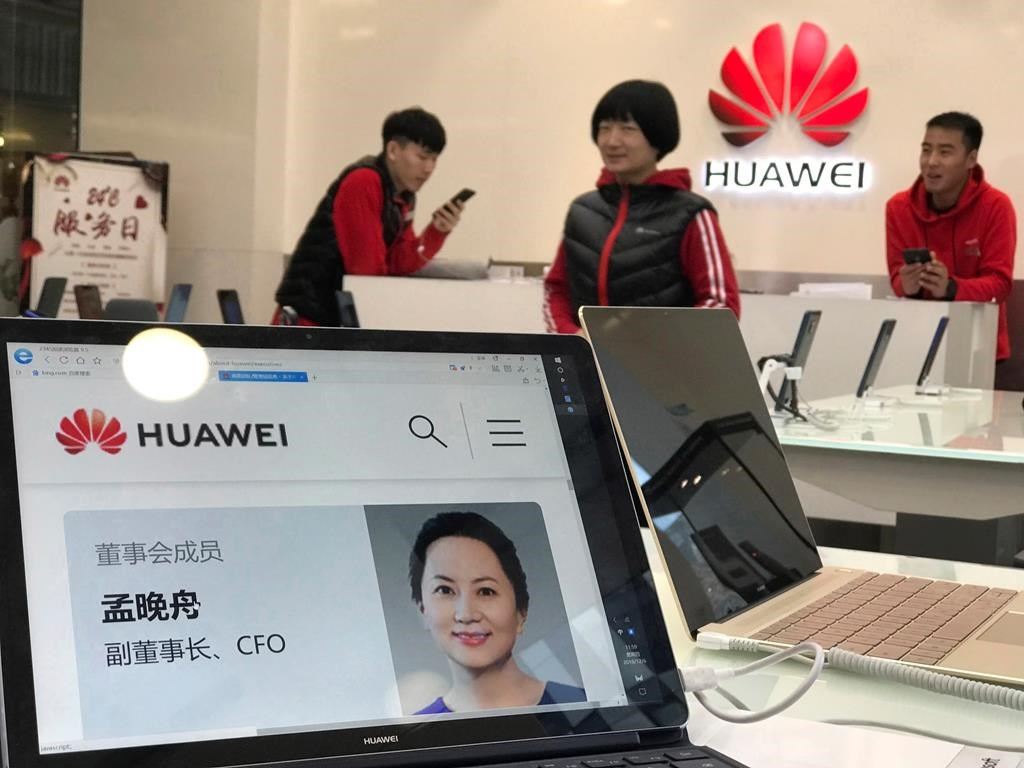 A profile of Huawei's chief financial officer Meng Wanzhou is displayed on a Huawei computer at a Huawei store in Beijing, China, on Thursday, Dec. 6, 2018. Photo by The Associated Press/Ng Han Guan
Previous story
Next story

China's embassy in Ottawa is demanding the immediate release of Huawei Technologies' chief financial officer, who was arrested in Vancouver over the weekend and faces possible extradition to the United States.

In a statement posted online Wednesday, the embassy says Wanzhou Meng hasn't violated any U.S. or Canadian laws, and called the arrest a serious violation of human rights.

It says China will closely follow the developments on the case and "take all measures to resolutely protect the legitimate rights and interests of Chinese citizens."

Meanwhile, a clerk at the B.C. Supreme Court says Meng appeared in court Wednesday and a bail hearing is scheduled for Friday.

Justice Department spokesman Ian McLeod says in an email that Meng was arrested Saturday, but further details cannot be provided because a publication ban is in effect at her request.

It is not known what law is alleged to have been breached in Canada.

In a statement, Huawei says Meng is being sought for extradition to face unspecified charges in the Eastern District of New York. She was arrested when transferring flights in Canada, Huawei said.

"The company has been provided very little information regarding the charges and is not aware of any wrongdoing by Ms. Meng," the statement said. "The company believes the Canadian and U.S. legal systems will ultimately reach a just conclusion."

A foreign ministry spokeswoman, Hua Chunying, said then that China hoped the U.S. would refrain from taking actions that could further undermine investor confidence in the U.S. business environment and harm its domestic economy.

U.S. President Trump has threatened to raise tariffs on Chinese goods in response to complaints that Beijing improperly pressures foreign companies to hand over technology. That is widely seen as part of a broader effort by Washington to respond to intensifying competition with Chinese technology industries that Trump says benefit from improper subsidies and market barriers. The escalating trade war is threatening world economic growth and has set global investors on edge.

"That's something we should be watching out for. It's a possibility. China's plays rough," Mulroney told The Associated Press. "It's a prominent member of their society and it's a company that really embodies China's quest for global recognition as a technology power."

Mulroney said Canada should be prepared for "sustained fury" from the Chinese and said it will be portrayed in China as Canada kowtowing to Trump. He also said the Iran allegations are very damaging to Huawei and said China will push back hard.

U.S. Sen. Ben Sasse, a Republican member of the Senate armed services and banking committees, applauded Canada for the arrest.

"Americans are grateful that our Canadian partners have arrested the chief financial officer of a giant Chinese telecom company for (allegedly) breaking U.S. sanctions against Iran," he said.

Meng is a prominent member of Chinese society as deputy chairman of the Huawei board and the daughter of company founder Ren Zhengfei.