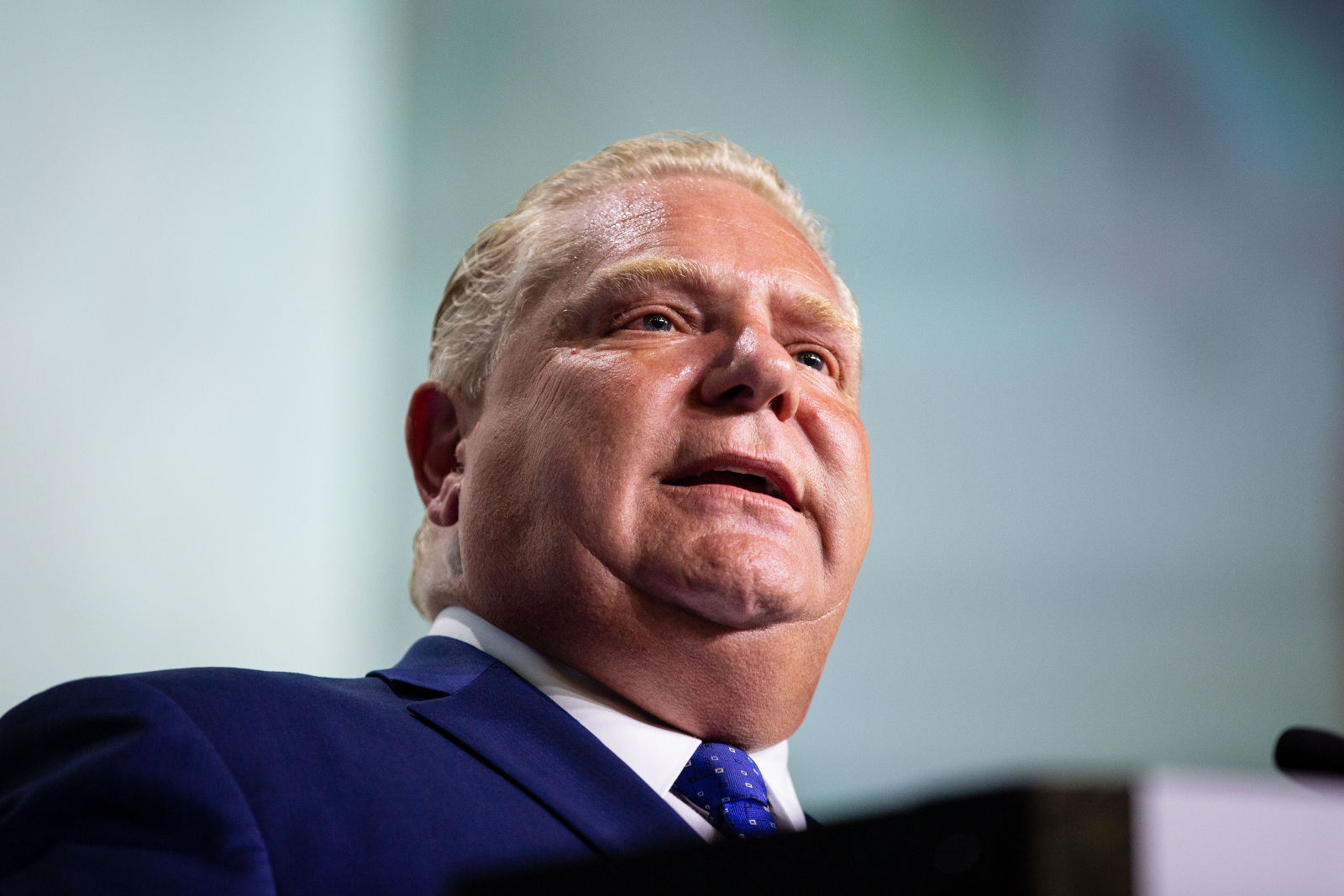 Ontario Premier Doug Ford says he won't apologize for steps he took to "clean up the mess" at Hydro One despite a stunning assessment by a Washington state regulator that there was too much political interference to allow a merger with U.S. energy company Avista Corp.

“Yesterday’s news from the U.S. doesn’t change our focus on bringing down hydro rates and protecting the people of Ontario," Ford said in a statement Thursday.

“While some critics might believe that the concerns of Ontario families, seniors, and businesses should take a back seat to foreign regulators, our government remains unwavering in our commitment to the people of Ontario to reduce hydro rates and provide a reliable energy system."

On Wednesday, the Washington Utilities and Transportation Commission, which regulates private energy companies, issued an order denying Hydro One's purchase of Spokane-based Avista Corp. That deal was made in mid-2017 and was subject to approval by state and federal authorities in the U.S. In its order, the Washington commission flagged Ford's removal of the Hydro One board following his election and the replacement of Hydro One's CEO, Mayo Schmidt, who was key in working out the merger plan. Ford had dubbed Schmidt "the $6 million dollar man" because of his annual compensation.

Hydro One has said the merger would make it one of the biggest power companies in North America and would allow it to reduce customers' electricity bills.

"(Hydro One) simply cannot be considered an independent, publicly traded company with a board of directors possessed of sufficient independence and power to protect Hydro One from political interference likely to cause harm to the company, much less to protect Avista from the consequences of bad decisions at Hydro One driven by the political whims of the controlling party in Ontario," commissioners wrote in the order.

The province is a 47-per-cent shareholder in Hydro One.

Hydro One could be on the hook for a $103 million termination fee, according to a 2017 proxy statement for Avista shareholders filed with the Securities and Exchange Commission in the U.S.

"I will never apologize for keeping my promises to the voters," says @Fordnation after #HydroOne merger with Avista Corp. vetoed by Washington state regulators.

"Doug Ford's political meddling has sent shockwaves through the business community and increased the risk of doing business in Ontario," said Arthur.

Though the Washington commissioners zeroed in on Ford's campaign promises, changes to the Hydro One board following the election, and new legislation that made those changes possible, they also flagged the NDP's election campaign promise to "return Hydro One to public ownership" and its commitment "to a 30 per cent reduction in rates and to bringing time-of-use pricing to an end."

The order said the commission was aware "that Hydro One’s move toward privatization remained controversial in Ontario and was a highly visible issue leading up to the province’s June 2018 elections in which three political parties vied for majority control and control of the opposition party."

"If we had come into power and we had changed the structure of Hydro One, we would not have acted in a way that would have put us at risk," Tabuns said.

“The reality in Ontario is as long as that company is privately owned, it’s going to be run to maximize profit for investors, not to make sure that people have affordable electricity. We weren’t saying that we were going to be able to do it overnight, we saw it as a long term process.”

At Queen's Park on Thursday, Ontario Energy Minister Greg Rickford told reporters that it is too early to comment on the potential costs associated with the merger being denied.

Although the commission clearly singled out actions by the Ford government, Rickford said he did not believe the regulator blamed any one government.

"I did not in any instance see or hear or read that the regulator had blamed this or any one government. In fact, if you read the decision, you'll see very clearly about a concern of past, present and previous possibilities of government interference," Rickford said.

In its order, the Washington utilities commission wrote that the change in government – and the new government's actions – compromised Hydro One's independence.

"Since June of this year ... the province has been anything but exemplary in its behavior, involving itself in direct and substantial ways in Hydro One’s business," commissioners wrote.

"It appears that Hydro One’s corporate identity as a private, publicly traded corporation depends significantly on the identity of the ruling party in Ontario, or even on the leadership of that party. In important respects we perceive Hydro One today, in light of the full record, to be a different entity than the Hydro One that entered into a merger agreement with Avista during 2017."

In his statement Thursday, Ford described the merger as a deal put together by Hydro One's previous board, which "did nothing to lower hydro rates for Ontario residents," and he characterized his decisions as keeping election campaign promises.

"Years of Liberal mismanagement and skyrocketing hydro rates (led) to seniors across the province choosing between heating their homes and putting food on the table. It was a status quo that was utterly unacceptable to the people of Ontario," Ford said. "Upon assuming office we acted decisively to keep our promise to Ontario voters. I will never apologize for keeping my promises to the voters."

Anyone who expected anything

Anyone who expected anything other than ignorance, thuggery, malfeasance, miscalculation and scandal out of a Doug Ford government must have had their head in the sand for the last 20 years. A lot of the voters who elected this buffoon wanted this, exactly this, and they're rubbing their hands with glee as the intelligent, educated, thoughtful people of Ontario are cringing. Gleeful wreckage is upon us in the western world. In our hyper-tolerance we brought it on ourselves. The worse news is we won't learn from this.

I am confused. I live in

I am confused. I live in rural Ontario and have been frustrated with comments that the costs for repairs to infrastructure has to be born by the rural community. My understanding for a public utility is that repairs and development is born across the whole community, both rural and urban equally. We have been told that there is a massive outlay of funds needed to update Hydro One and so we all are paying high costs. Oh wait, only in the rural area. On top of all this Hydro One has funds to merge with another utility in another country, which I might add is no where near Ontario. I think the whole system has gone mad and common sense has been flushed down the toilet. I am both frustrated and angry. And the icing on the cake is the possibility that this cancellation of the deal with Avista will come with an expensive bill for Hydro One users, again we are on the hook.