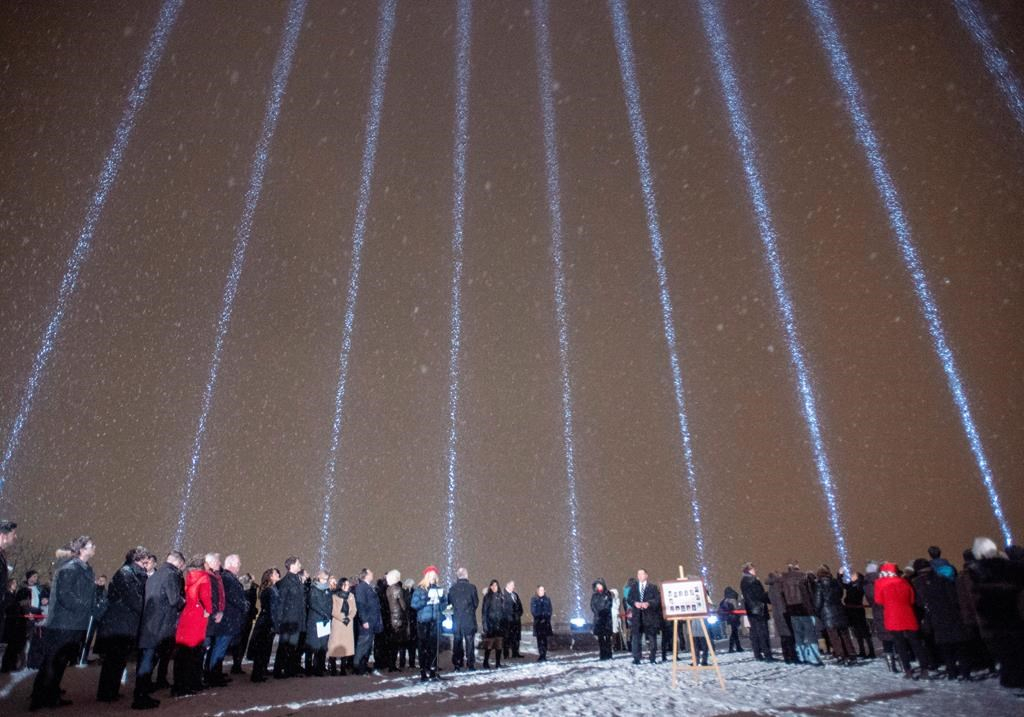 Fourteen lights shine skyward at a vigil honouring the victims of the 1989 Ecole Polytechnique attack, in Montreal on Thursday, Dec. 6, 2018. Photo by The Canadian Press/Ryan Remiorz
Previous story
Next story

Fourteen beams of light shone into the night sky from Montreal's Mount Royal Thursday evening in memory of the 14 women who died at the Ecole Polytechnique engineering school 29 years ago.

A crowd, which included Prime Minister Justin Trudeau, stood in silence atop the lookout as they attended a ceremony commemorating the victims killed on Dec. 6, 1989.

As each woman’s name was announced, a new beam illuminated the night sky, the 14 forming a semi-circle around the dignitaries, victims’ family members and members of the public.

Later Trudeau and his wife, Sophie Gregoire Trudeau, laid a wreath of white roses at the foot of a photo memorial of the women, accompanied by Quebec Premier Francois Legault, his wife Isabelle Brais, and Montreal Mayor Valerie Plante.

Catherine Bergeron, whose sister Genevieve died in the shooting, said the light beams are an appropriate way to remember the 14 bright women.

"They were little suns, bright girls with light in their eyes who were full of life, who wanted to do all kind of things," she said, adding that they "never questioned" the brightness of their futures back in 1989.

Bergeron said the memory of the country’s worst mass shooting should serve as a call to action to eliminate violence against women that exists to this day.

Earlier Thursday, Justin Trudeau said his government plans to limit access to handguns and assault weapons to confront gun violence in the country.

Speaking to Montreal radio station 98.5 FM, Trudeau did not rule out a full ban when asked by the host.

"We are currently reflecting on how we are going to do better to counter the violence caused by handguns and assault weapons, yes," Trudeau said. "What's happening is unacceptable."

Later in a news conference, he said his government is currently consulting on the best way to move forward on gun reform.

"I think people across the country expect us to do a better job protecting our citizens and our communities from gun violence," he said.

"There are concerns about the access that criminals have to handguns and assault weapons, and we're going to look at measures to continue to keep our communities safe."

In 2015, Trudeau's Liberals campaigned on a promise to "get handguns and assault weapons off our streets."

In October, as Ottawa held consultations on a possible ban of the weapons, groups representing survivors and families of victims of Quebec mass shootings questioned the government's commitment. They said they feared reforms would come too late in the government's mandate to be passed before the next election, scheduled for October 2019.

In a statement, Trudeau noted the victims were targeted because they were women. "We remember the victims of this hateful act of violence, and unite against the misogyny at the root of this tragedy," he said.

His statement did not mention firearms, but it called for action against violence and discrimination affecting women. "Survivors and advocates are leading the fight for change, and their example inspires all of us," he said.

In Quebec City, the flag at the National Assembly was at half-mast. "We have a duty to remember Polytechnique," Legault told the legislature. "The equality between men and women is part of the fundamental values of Quebec, and we must never take a backwards step."