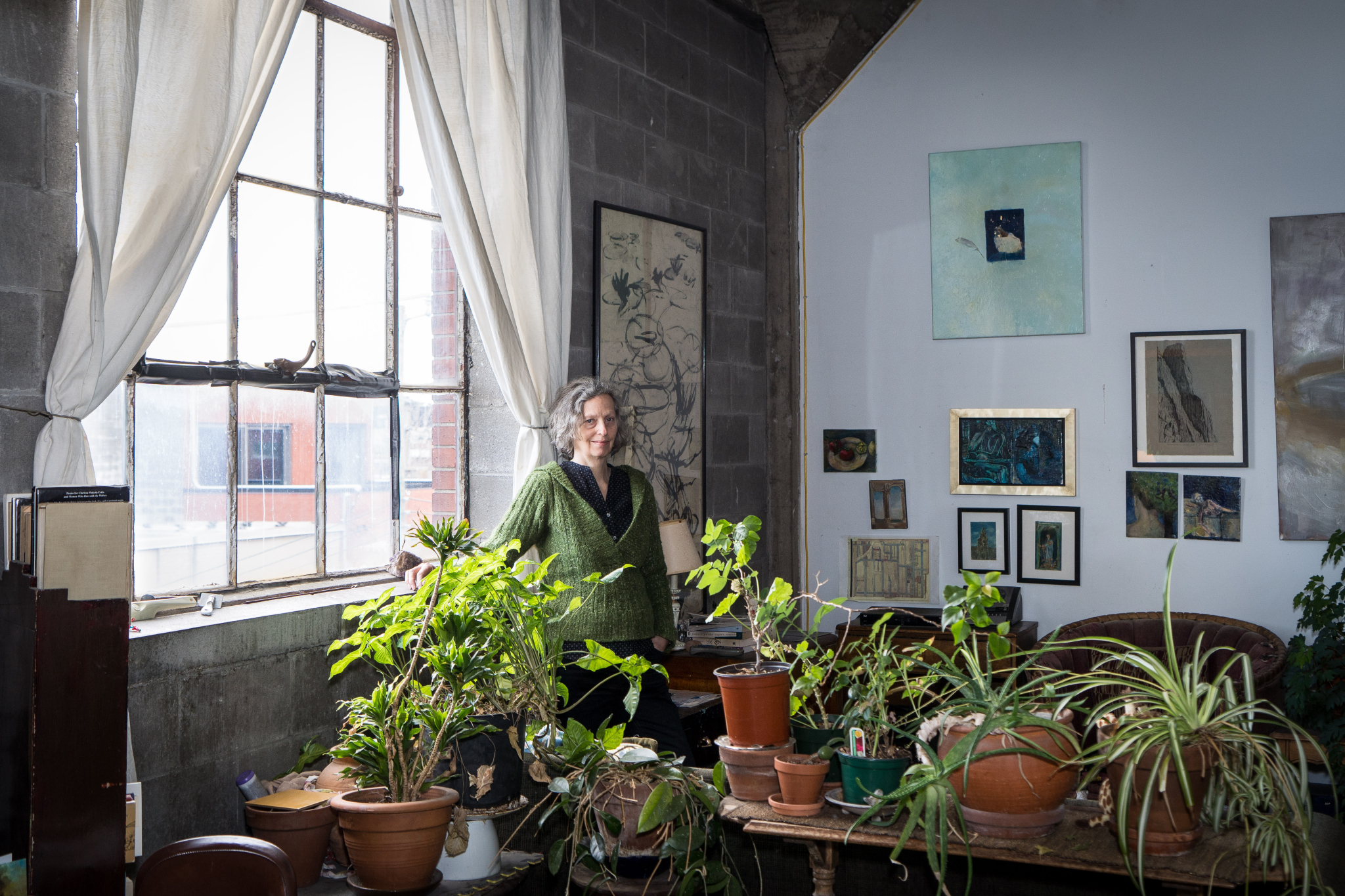 Frances Foster has lived and painted in a converted factory space in Mile-Ex since 1991. Photo by Josie Desmarais
Previous story
Next story

Artist Frances Foster has lived in a third-floor studio in old commercial printing factory in the Montreal neighbourhood of Mile-Ex since 1991.

"It's been a wild ride," she said, remembering the days when hundreds of clothing factory workers flooded the streets at 5 p.m. sharp, when fabric fluff floated everywhere, and when auto mechanics spun cars around the block on noisy test drives.

Those businesses have long since closed. Today you are more likely to find a well-heeled desk worker from a tech company stepping out for a bite at midday.

In Foster's opinion, the neighbourhood also known as Marconi-Alexandra is being "techwashed."

She is referring to a wave of artificial intelligence and other technology companies and institutes that have opened in her neighbourhood, renovating factories and attracting younger and more affluent residents and workers.

Even though more than 3,500 jobs have resulted, replacing all those lost when the clothing industry collapsed, Foster is worried.

“This was a poor neighbourhood. It was one of the poorest,” she said. “Its going to push people out of the neighbourhood. I have five years. But for those others who want to buy or rent a studio space it’s going to be out of reach. Just across the street, someone just sold their home for $1.5 million.”

In the last two years, Montreal has become one of the world’s leading hubs for artificial intelligence research, with multinational corporations IBM, Facebook, Google, Samsung and Microsoft setting up research facilities. They have attracted a significant number of companies and academic research groups to Mile-Ex. The 0.5 square-kilometre neighbourhood was until recently better known for its quirky architecture, artists' studio spaces and a smattering of bars and restaurants.

In September, Microsoft joined those ranks when it announced plans to establish its lab in an old meat packing factory. The lab will be minutes away from the ‘O Mile Ex’ building, a refurbished clothing factory that houses academic research institutes Mila and the Institute of Data Valorisation (IVADO), solutions provider Element AI and French aerospace company Thales.

Marconi-Alexandra has always been a mixed-use neighbourhood, with big concrete industrial buildings, warehouses and garages shoulder to shoulder with residential buildings. It defies Montreal's grid system with a tangle of streets, many of which hit dead ends at old or existing railroad tracks.

“We don’t want to be the next Silicon Valley in terms of social impact" says François Croteau, mayor of Rosemont Petite-Patrie, on planning for the boom of AI companies and research labs in Marconi-Alexandra. #mtlpoli #qcpoli #MontrealAI

Artificial intelligence is not the first wave of industry to embed itself; throughout the 20th century, box manufacturing, paint and clothing industries came and went.

"If we want people to live in Montreal, stay in the centre of the city, and work where they live, then this is the greatest thing that is happening right now," he added.

What’s in a name?

The name “Mile-Ex” vexes longer-term residents, who see it as a symbol of the rapid changes to the district and its commercialization. They opt for Marconi-Alexandra – a city planners' name from the 1980s inspired by two streets – or Petite-Patrie, the larger district it is found in.

"[Calling it Mile-Ex] is a cute, hipster way of presenting an alternate reality, without having to actually acknowledge the social, economic, cultural and political aspects of where you are,” long-time resident Rachel Heap-Lalonde told National Observer.

Aaron Vansintjan, a Park-Ex resident who researches gentrification at the University of London, said that the distinction is important. “Mile-Ex is not a thing. It’s an invented term. It’s a way of really putting a brand on this neighbourhood.”

First coined in the early 2000s as a combination of Mile End and Park-Ex, the neighbourhoods south and west, the catchy moniker is widely used and has made its way onto Google Maps. The name was further popularized by the annual Mile Ex End Montreal music festival, launched in 2017 and financed in part by high-profile Quebec entrepreneur Alexandre Taillefer’s private equity firm.

Element AI moved its 450 employees into new offices last month. Company cofounder Anne Martel told National Observer that the location was chosen largely because it was one of few areas offering space for fast-growing companies.

The Montreal-based start-up develops solutions for businesses which want to incorporate AI into their work. One of the major players on Canada's AI scene, it raised $135 million in 2017 from high profile tech investors – at the time the biggest amount ever raised in Series A funding by an AI-focused company.

“I can’t say there were many options when we contemplating moving,” she explained. She added that the new location was "exciting" as it is at the junction of two desirable neighbourhoods. "On one side we have the Italian neighbourhood with the [Jean-Talon food] market, great food, perhaps a bit more traditional. And the grittiness of the Mile End right next to it.”

She said that when “planned properly – and I think the City is doing a good job at that – I think gentrification is just necessary for local businesses to survive and thrive. If there is no gentrification then they are not able to sustain as businesses.”

Gilles Savard, CEO of IVADO, which moved to the neighbourhood in April, said that that the research institute “needed space eventually to be a hub of innovation, a place for research labs, for start-ups, for computing infrastructure.... The ceilings are high, there aren't many columns, its solid and its open.”

While the snowball effect was not planned, neither was surprised that other AI entities had gravitated there. Business clusters are typical in tech, California's Silicon Valley being the most prominent. A key draw is proximity to research labs at affiliated universities of McGill, Polytechnique Montreal, HEC Montreal and the University of Montreal.

Savard said that he is an optimist by nature and believes the AI cluster is positive. "I speak to local business owners on St. Laurent and Little Italy," he said. "They have seen the decline of their neighbourhood because the old textile factories closed. It became a zone that had become a little less attractive, and the positive effect is that it brings activity to the neighbourhood."

Indeed, Marconi-Alexandra has come a long way in the last 40 years. Local historian Justin Bur said in an interview with National Observer that in the 1980s, it was “the bottom of anybody’s list of places to live.”

Bur is the director of the local history society and community group Mile End Memories.

The industries that dominated the district in the first half of the 20th century – box manufacturers, paint companies, electronics – had closed, their low-income workers had moved out, housing was in “bad shape” and education levels were low, he explained. “For an urban planner in the 1980s, it was a complete disaster zone.”

Clothing factories dominated from the 1980s, and by the end of that decade, the area was made marginally more accessible by removal of a railroad tracks dividing the neighbourhood. (The other half still exists, making transit to the more bourgeois Mile End – home to bars, bagel joints and bookshops – a little more convoluted.)

Croteau, the borough mayor, said that the recent influx of technology firms and research groups has reinvigorated the area beyond his original hopes. "It’s the perfect scenario,” he said. The neighbourhood has regained all 3,500 jobs it lost when the clothing industry crumbled, and he estimates that number to rise to 5,000 in the next few years. “The neighbourhood is more dynamic economically right now than it was before we lost all of the jobs,” he said.

The opening of the University of Montreal’s new science campus in fall 2019 in nearby Outremont will further galvanize business in the area, he said, as students make the short trip “to eat, to go out, to shop” on one of his borough's main arteries, St. Laurent Boulevard.

Vansintjan, the gentrification researcher, sees signs of ‘retail gentrification’ in which older residents and businesses are displaced by new business. People often think that is fine, because it isn't residential, he explained. But in fact, the redevelopment of industrial sites into office spaces “increases the real estate value in the places around, and it also increases the pressure on local businesses because they have to make a lot more money [to cover their rent] to sell to the new residents,” he said. Older residents are marginalized and have less access to the services they are used to having, such as bars, community centres, diners, churches and shops. "Even if their rent stays the same, they will become more isolated and lonely and will probably start struggling to get access to adequate, affordable food."

He said that the area has signs of 'new-build gentrification,' when previous industrial sites are rezoned and redeveloped into either commercial or residential, and noted that in neighbouring Little Italy, several corner stores have been renovated for new clientele and a church has been turned into a condo.

Heap-Lalonde teaches social work to college students and has lived in Marconi-Alexandra for most of 32 years. Things have changed a lot recently, she says. “For 10 years, it has been building, building, building, and what that means is the sense of community can’t build as fast. And a lot of the people are just buying and selling for condos and not really living in the neighbourhood.”

She said she has watched the replacement of affordable restaurants, stores and bars with glossy, expensive ones. The green space where she played as a child is now an expansive Home Depot parking lot. And alongside other community members, she is fighting to ensure that a previously wild, green space at the heart of Marconi-Alexandra is reclaimed from a local real estate developer, who purchased and surfaced it.

Croteau said he is aware of local residents’ concerns. He says the City of Montreal will work to mitigate gentrification by building social housing units. He explained that zoning has been frozen in Marconi-Alexandra since 2013 to prevent conversions of apartments to condos and of industrial buildings to condos.

But for the moment, there is no such housing in Marconi-Alexandra. This will change, Croteau said, once the city finds space for construction. “We want to work with the people and we are happy that they stay mobilized and aware," he said. "We want to make sure we are not ejecting them from the neighbourhood. For us, its very important to be sure of that."