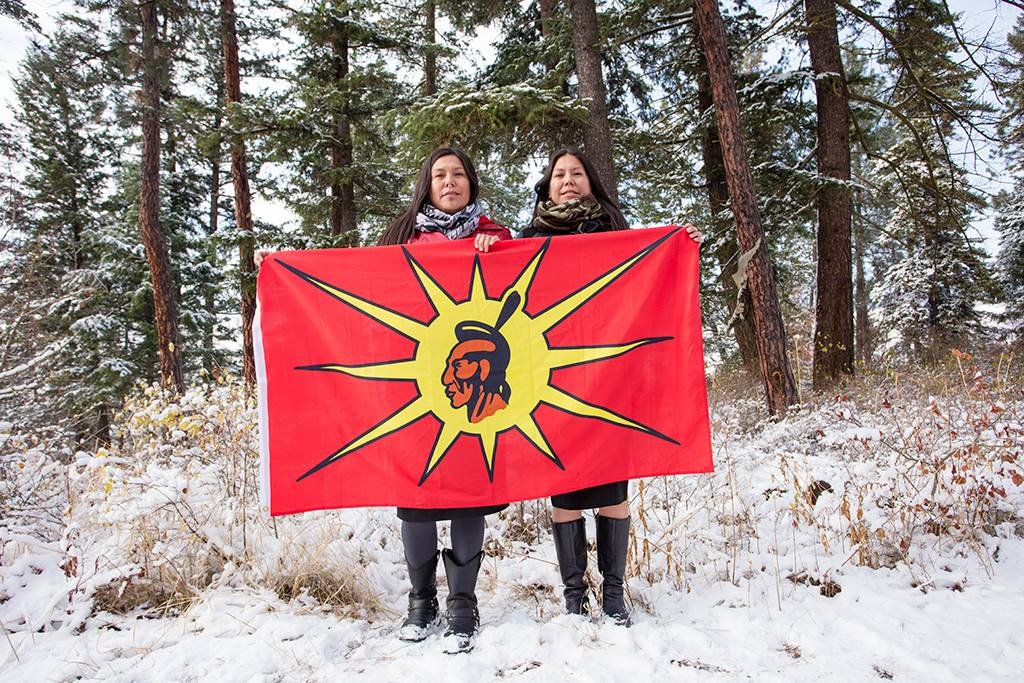 Mayuk Manuel, seen here in a March, 2018 photo with her twin sister Kanahus Manuel, was one of three people arrested on Dec. 10 outside Thompson Rivers University in Kamloops. File photo by Sarah Anne Johnston
Previous story
Next story

Three members of the Secwepemc First Nation were arrested in Kamloops on Monday as they sought to disrupt closed-door talks they were excluded from about the Trans Mountain pipeline taking place between government officials and other Indigenous groups.

Mayuk Manuel, Snutetkwe Manuel, and Isha Jules were arrested outside of Thompson Rivers University and later released with conditions. All three are part of the Tiny House Warriors, a group that has built tiny homes in the path of the planned pipeline expansion in an attempt to stop its construction.

Mayuk Manuel and Snutetkwe Manuel are daughters of the late Arthur Manuel, a noted Indigenous leader who wrote The Reconciliation Manifesto and Unsettling Canada and who started the Indigenous Network on Economies and Trade organization.

Kanahus Manuel, sister of Mayuk and a spokesperson for Tiny House Warriors, explained what happened to National Observer. There are also videos of the arrests.

Kamloops RCMP said in a statement that they were asked to attend when members of the campus security were allegedly assaulted and property was alleged to have been damaged with paint poured on the sidewalk.

The RCMP said an investigation of mischief and assault is underway, although Kanahus Manuel said they were charged with assault, mischief and creating a disturbance.

“I am not mischief, I am Secwepemc,” Mayuk Manuel said in a news release. “We are monitors of our lands. The Trans Mountain Expansion pipeline does not adhere to the basic standards for social, economic, ecological and cultural safety. Whether transported by rail or pipeline, bitumen from the Alberta tarsands puts Secwepemc health at risk. It’s a risk we’re not willing to take. So, we do not give our consent.”

The RCMP fully support the right to peaceful and safe protest, but businesses also have the right to conduct meetings, Kamloops RCMP Cpl. Jodi Shelkie said in a statement.

“No one has the right to damage property or to put someone else at risk. As soon as we see a situation where property is getting damaged or the public is at risk then we must step in,” Shelkie said.

All three were released with conditions including that they must stay away from the TRU campus, any federal meetings with Frank Iacabucci, and any Trans Mountain facilities or right of ways, Kanahus Manuel said in an interview.

“I am not mischief, I am Secwepemc,” said one of the protesters against the Trans Mountain pipeline expansion after she was arrested outside talks between government and Indigenous representatives and later released with conditions.

“These roundtables are a space for potentially impacted communities with varying views on the project to come together and help shape this process,” the federal department said in an emailed statement.

“We stand firmly behind the right to peaceful protest. However, actions that could interfere with any groups ability to safely participate in this process raises serious concerns. Our priority is ensuring the safety and security of all participants as this process moves forward.”

In August, the Federal Court of Appeal quashed the federal government’s approval of the Trans Mountain Expansion project, finding the federal government didn't adequately consult with First Nations or consider the impact of increased tanker traffic, particularly on endangered killer whales. The federal government announced last May that it would buy the pipeline for $4.5 billion from Kinder Morgan. It is also proceeding with new consultations.

“Trudeau must respect Indigenous Peoples’ right to consent to energy projects and our right to say ‘no’,” Kanahus Manuel said. “Unless he is willing to do this, any consultation process his government runs will be a rubber-stamp mockery of our rights.”

Activists say they are not being represented in talks with government

A major concern for Kanahus Manuel and the others that are arrested is that they are not being represented in the talks.

“The Tiny House Warriors are opposed to closed-door meetings by federal bands that turn away proper and rightful title holders. In the Secwepemc Nation, consent is exercised collectively,” the group said in a news release. “Federally-recognized bands are part of the system enforced by the ongoing colonial administration and they do not hold title over the majority of our lands, which are unceded and not governed by treaties.”

For any consultation to be valid, it would have to be done with the entire collective of Secwepemc people, and would be decided by consensus, Kanahus Manuel said in an interview.

She said her group is opposed to having any bitumen transported through the territory.

“We don’t want it through train, rail or highways. It’s too risky for us to compromise any of our land and water for,” she said. “We have the next 150 generations to think of and we have to ensure this water remains clean.”

Manuel says her group has been getting death threats, both on social media and in person in Blue River, at the Tiny House village.

“They just make us even more vulnerable by encouraging hate on our social media and then encouraging hate by coming and seeing how much they can get away with how they’re treating us here.”

She says people shouldn’t be criminalized for standing up for their land rights.

“Canada got very wealthy and rich off of the wealth of our Indigenous economy. The whole basis of the country of Canada and the power that they ride on right now is off of our wealth, our economic Indigenous wealth, Kanahus Manuel said. “We’re fighting for our deer, our moose, our berries, our water, our trees, our economic wealth that we’ve never given up.”

Editor’s note: This article was updated at 7:24 p.m ET on Dec. 13, 2018 to correct references to the federal department, Natural Resources Canada (NRCan), which was incorrectly referred to in an earlier version as NRC.

Jailed for fighting a pipeline, but now she is free