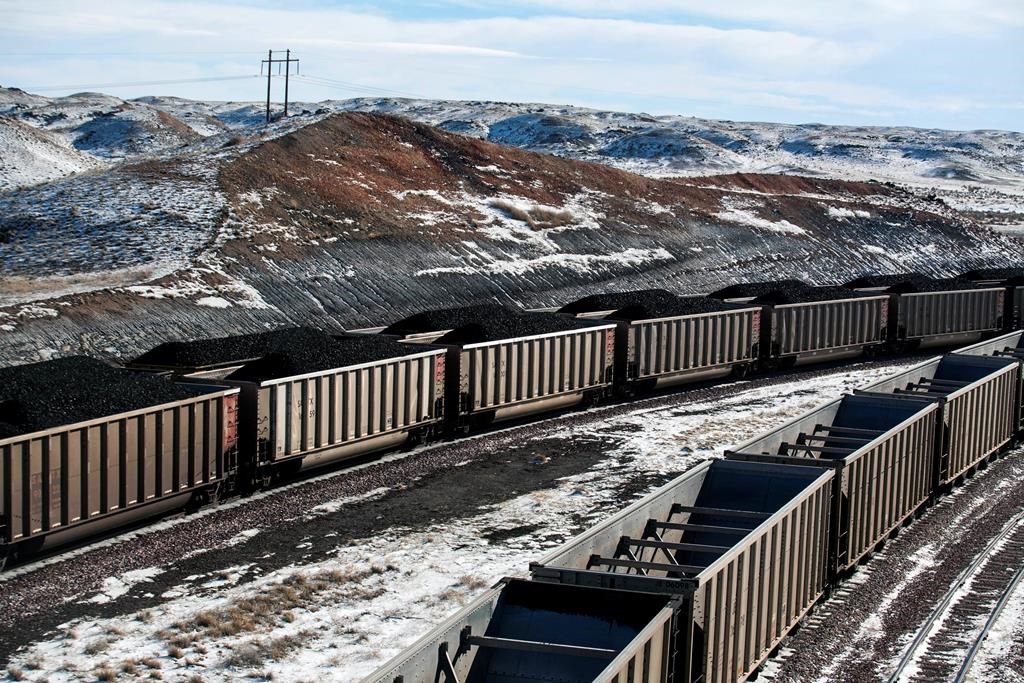 In this Jan. 9, 2014, file photo, rail cars are filled with coal and sprayed with a topper agent to suppress dust at Cloud Peak Energy's Antelope Mine north of Douglas, Wyo. File photo by Ryan Dorgan/The Casper Star-Tribune via AP
Previous story
Next story

Four states that say burning coal will hurt their residents as it makes climate change worse are trying to stop the Trump administration from selling vast reserves of the fuel that are beneath public lands.

Attorneys for California, New Mexico, New York and Washington argue the coal sales have been shortchanging taxpayers because of low royalty rates and cause pollution that puts the climate and public health at risk.

The states were joined by conservation groups and Montana's Northern Cheyenne tribe in a lawsuit that seeks to revive a coal leasing moratorium imposed under President Barack Obama. The moratorium blocked new lease sales from federal lands that hold billions of tons of the fuel.

U.S. District Judge Brian Morris is presiding over a Thursday hearing on whether the moratorium should be reinstated.

The Trump administration said in court filings that ending the moratorium last year was of critical importance to the economy. That claim comes despite the slow pace of lease sales in recent years and a precipitous drop in demand for the heavily polluting fuel.

U.S. lands in Western states including Wyoming, Montana, Utah and Colorado are a major source of coal for mining companies. There are 7.4 billion tons of the fuel in roughly 300 leases administered by the Bureau of Land Management .

Morris, who was appointed by Obama, recently ruled in a separate case that the administration must consider reducing coal mining in the Powder River Basin of Wyoming and Montana to help combat climate change.

The judge has played the role of spoiler to Trump on another Obama administration policy reversal — the contentious Keystone XL oil sands pipeline from Canada. Trump approved the pipeline last year, but Morris blocked it temporarily in March. The judge said further environmental reviews were needed for the line to comply with federal laws.

Some of those same laws are at the centre of the coal moratorium dispute.

The states and their allies want push to stop further leasing and resume a sweeping review of the program's environmental effects. Government attorneys and the National Mining Association say the review started under Obama was a voluntary step and the Trump administration is within its rights to end it.

"We view this as a legal issue and believe this is an open-and-shut case," said Conor Bernstein with the mining association, which has intervened in the case.

Growing concerns over climate change have put a spotlight on the once-obscure coal leasing program, which has gone largely unchanged and not been through a major environmental review since 1979.

Companies have mined about 4 billion tons of coal from federal reserves in the past decade, contributing $10 billion to federal and state coffers through royalties and other payments.

The Obama administration blocked the sale of new leases in 2016 out of concerns over climate-changing greenhouse gases from burning coal and to review royalty rates paid by mining companies for federal coal.

Interior Secretary Ryan Zinke withdrew the moratorium in March 2017. He said the Obama administration's environmental review would cost "many millions of dollars," and improvements to the program could be made without prolonged study.

"He ignored the law in opening the door to expanded coal leasing without taking a hard look at the environmental consequences," Becerra said in a statement.

Federal officials and members of Congress have said for years that royalty rates were shortchanging taxpayers. Under Obama, officials began considering raising rates, but it was not done.

After the Trump administration ended the moratorium, Zinke appointed a committee to review royalty rates. Critics contend he has stacked the panel with industry-friendly representatives interested in maintaining the status quo.

Since January 2017, the government has sold leases for 134 million tons of coal on more than 13,000 acres of public land in six states, according to figures provided by the Interior Department.

That's a relatively small amount compared with previous years, for example 2011 and 2012, when more than 2 billion tons were sold in Wyoming alone.

Despite the slowdown in sales, the outcome of the court case could be pivotal to the industry's long-term outlook and determine if it has access to a cheap and readily available supply of coal. For environmentalists, it's a question of making sure that coal is never burned to prevent carbon dioxide emissions tied to climate change.

"The idea that they lease millions of acres of public lands every year to private companies so that they can extract the coal and we've never once studied the climate impacts, that should bother people," Sierra Club attorney Nathaniel Shoaff said.

By Mia Rabson | News, Politics | December 10th 2018
Reports from the Race to a Safer World

By Frank Jordans | News, Politics | June 27th 2018
Reports from the Race to a Safer World