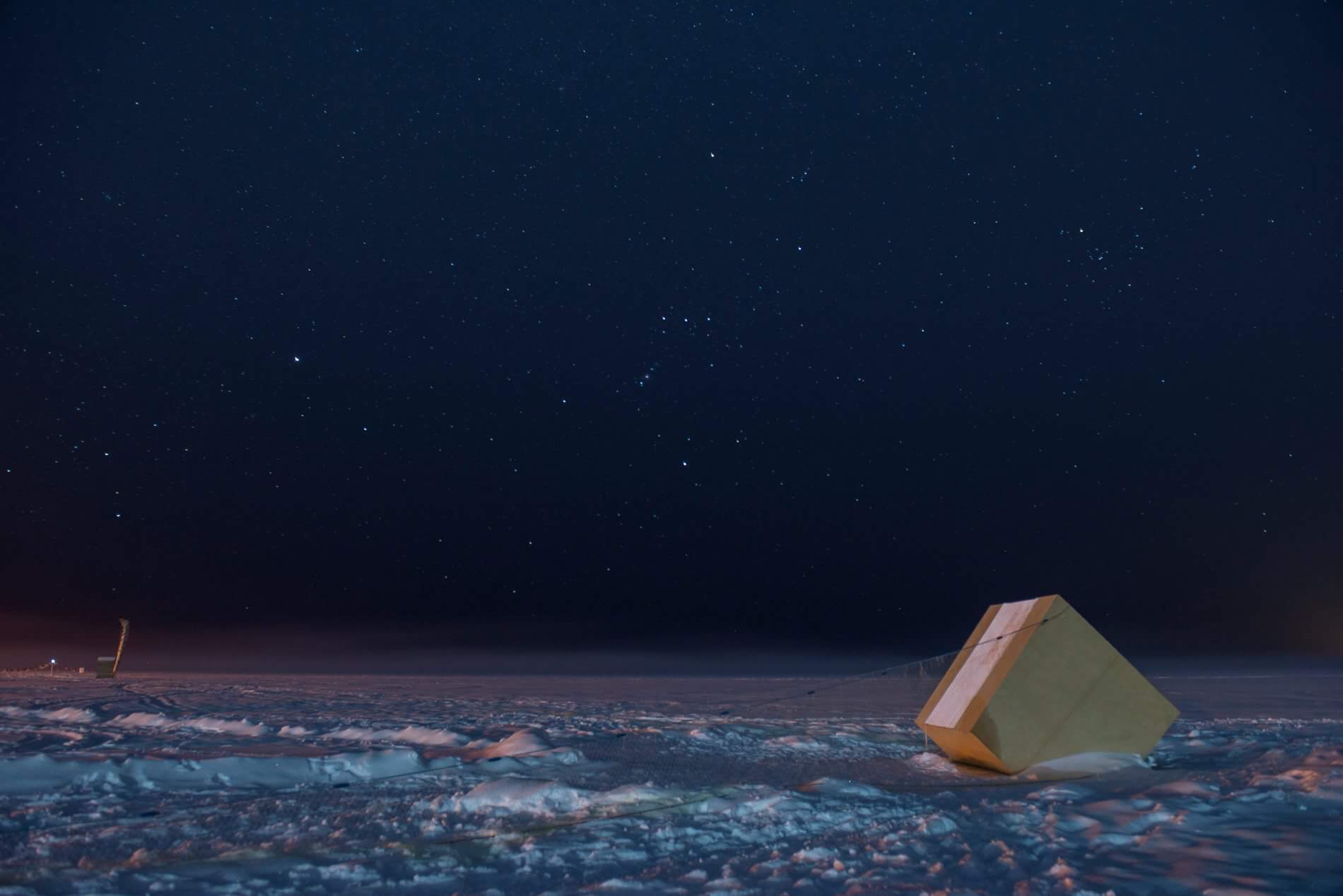 Ice Follies 2018, which was installed on Lake Nipissing (Nbisiing in Anishinaabemowin) from Feb. 9-20, 2018, reflects the effects on the lake of traditional fishing methods and those used by local non-Indigenous people. Photo by Liz Lott
Previous story
Next story

The Ontario government has taken an axe to a program that was designed to advance the province’s response to calls to action from the federal Truth and Reconciliation Commission.

The Indigenous Culture Fund (ICF), an initiative of the Ontario Arts Council, just lost $2.25 million in funds for this year, according to a statement from the council obtained by National Observer, pending review by the Progressive Conservative government to “ensure taxpayer dollars are being used responsibly and efficiently to maximize the impact of Indigenous culture support.”

The council has lost $5 million in base funding, taking them back to the $64 million funding level of the 2017-2018 fiscal year.

Four Indigenous women in the ICF office have been laid off in the cuts.

Goals of the program include supporting Indigenous language revitalization and building capacity for knowledge sharing in communities traditionally overlooked by cultural granting offices.

“It was there to revitalize culture. And that’s what Indigenous people need as part of the TRC,” said Aylan Couchie, an Anishinaabe writer and artist from Nipissing First Nation.

“Of course education to Canadians is great but you know, this is something that we needed for us.”

The cuts were made days before Indigenous elders and teachers were to arrive in Toronto to participate in the program, and explained as part of the Ford government mandate to improve efficiencies. A statement from Lisa Thompson, education minister, said that “all ministries will seek to carry out initiatives in the most cost-effective way possible,” reported CBC.

Couchie and Ian Campeau, a musician, advocate and co-founder of A Tribe Called Red, were planning to prepare grant applications to fund community-based projects next year. They’ve decided to forgo the ICF application in the event they take the place of other applicants who have less access to alternative funding sources.

The Ministry of Tourism, Culture and Sport, which oversees the ICF, says that applicants who have already received grants won't be affected.

"Artists and arts organizations play an important role in building a strong economy while contributing to the quality-of-life of our communities," wrote Brett Weltman, press secretary to Culture Minister Michael Tibollo, in an email. "The previous Liberal government’s irresponsible handling of the province’s finances left us with a $15 billion deficit, and has forced us to make tough decisions."

In a review of the province's finances released Monday, Financial Accountability Officer Peter Weltman indicated that the Ford government had overstated the deficit by $1 billion.

The Ministry of Indigenous Affairs did not respond to a request for comment.

“These are callous cuts,” said Jill Andrew, the NDP’s culture critic and MPP for St. Paul’s, adding that the “implications are severe.”

“The arts community, and the Indigenous peoples, they deserve better,” she said, adding that the NDP will be calling on the government to restore OAC’s funding and to sustain programs such as the ICF, which are designed to serve historically marginalized communities.

The government's cut of $2.25 million to the Indigenous Culture Fund at the Ontario Arts Council is a disturbing step back from the TRC's Calls to Action. This and the $5 million cut to @ONArtsCouncil's base funding is an alarming attack on arts and culture. #onpoli #Culture https://t.co/4mRfTm3qVZ

“It’s an example of the conservatives dragging Ontario backwards from bad to worse,” Andrew said in a telephone interview with National Observer. “We need to take responsibility and stand firmly and support the action items that came out of the TRC. The Ford government is not doing this.”

The year-old program was to be a low-barrier bridge for communities typically underserved by arts grants, says Jesse Wente, who first tweeted the news of ICF cuts Friday morning.

Through the ICF, you didn’t have to be a professional or established artist to be eligible, making the fund far more accessible to the types of community engagement and cultural preservation work the program was designed to foster.

“For many, many years, those cultural practices were not just obscured, they were outright attacked in an attempt to erase them,” said Wente in an interview.

The fund, he explained, is critically important for cultural preservation across the country, “and not just for Indigenous citizens.”

The funding cuts are completely disproportionate he says, especially in the province with the largest Indigenous population in Canada.

“This is the legacy and the origins of this province. Not making sure that these cultural practices can continue and thrive is a loss not just for Indigenous communities, but for all of Ontario.”

Wente says steps will be taken to discuss the restoration of the funding with the PC caucus and the official Opposition NDP.

Couchie, too, says she’d rather not go down without a fight.

I heard about this late last night & it gets even worse. Update soon. I AM livid. Over the past few months I knew @fordnation would cut the OAC, but I thought FOR SURE he’d never touch the Indigenous Culture Fund because there’s so much good work being done there. I was wrong. https://t.co/fzIrVHAhSv

In addition to focusing on a spate of projects, including writing a book chapter, Couchie says she’s directing some of her time to get action and reverse the impending cuts.

She’s planning to gather signatures for a legislative petition over the coming weeks, which may happen in part through an action outside of Finance Minister Vic Fedeli’s North Bay office.

From the archiving of oral histories from elders to community engagement, future artists and story-tellers should be able to access the land and community-based knowledge that could be catalogued with the support of ICF funds, allowing for the transfer of knowledge from elders to youth over the coming generations.

“They’re losing the opportunity to engage elders and youth. Particularly on our reserve we're losing elders on a regular basis and every time an elder passes away we lose a vessel of knowledge that could have been saved in terms of storytelling, oral histories, histories about us, histories about the land,” said Couchie.

“There’s a lot embedded in the language – in our dialects – that speaks directly to changes that we're seeing in the land, in terms of climate change, in terms of so many things.”

“This is not just about professional artists,” said McKiver, who is a composer, violinist and member of the Lac Seul First Nation. “It’s about responding to the Truth and Reconciliation Commission, giving access to cultural revitalization to help mitigate the intergenerational effects of residential schools.”

McKiver, who has worked with the Ontario Arts Council as a juror for other programs and also received grants for their work, says they do a lot of work with queer Indigenous youth and that between the cuts to the fund and the tumult around sexual health education the PC caucus has sent a lot of “targeted messages” in the early days of the Ford government.

“I think the government is sending a definite tone on which communities are no longer welcomed in Ontario and we’re just sort of bracing ourselves to see what comes next,” they said.

Editor's note: This story was updated at 6:05 pm ET on Friday Dec. 14, 2018 with comments from the Ministry of Tourism, Culture and Sport and to clarify that the cuts to the ICF are in addition to those to the OAC's base funding.

No low too low for Ford and

No low too low for Ford and Gang.

It is symptomatic of the

It is symptomatic of the "austerities" that governments impose on people when their own mismanagement and/or corruption is the major problem with economies. In the US, public education has been systematically impoverished by state and local government - leading inevitably, to the stratified public, semi/public voucher style schools, and the fully private schools. All perfectly in keeping with the current American belief that poverty is self imposed, and of course racialised. This major betrayal of the belief in tax paid education is a slippery slope rapidly condemning large groups of people to third world status in the US.
Ford's hacking away at education, at culture, at arts is the monkey see, monkey do response of a man/party reduced to borrowing fraudulant ideas from the increasingly deranged nation to our south.

These are cuts that I

These are cuts that I expected from Ford and I believe they would have been made even if there was not a big hole left by the previous regime.
They come as no surprise...remember Harris....remember Dudley George...some things never change.