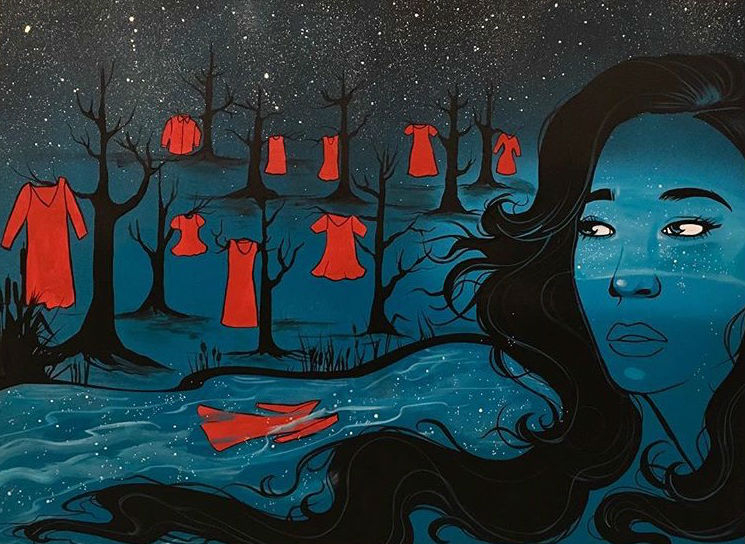 A painting by Jay Soule, known professionally as CHIPPEWAR, called 'Blues for Reddress,' aims to raise awareness for missing and murdered Indigenous women and girls. It is displayed at the University of Toronto. Photo courtesy of Soule on Instagram
Previous story
Next story

“They protect maple syrup in Canada, right?” exclaims Nadine St-Louis, speaking over the phone during an interview with obvious frustration.

“There’s legislation that protects maple syrup because it’s considered part of our Canadian heritage... Why can’t we do the same thing to ensure that only the Indigenous items that can be sold in Canada are made by Indigenous communities?”

There’s a glaring, sticky irony in the fact that the country's Indigenous peoples, who taught the early settlers how to harvest sap and boil it to make maple syrup, don't have robust legal protection for their own cultural heritage, while the industry enjoys an iron-clad defence.

According to the Canada Agricultural Products Act and the Maple Product Regulations, the term 'Canadian maple syrup' can only be used if the product meets certain requirements. A similar labelling law protecting Canadian and Vermont maple syrup, the Maple Agriculture Protection and Law Enforcement Act, also exists in the U.S. to protect from inferior products being marketed as authentic.

And while false or deceptive marketing is illegal in Canada, and subject to investigation by the federal Competition Bureau, there is no legislation that specifically protects authentic Indigenous culture and design with the same intentionality as the maple syrup law.

Reading between the lines, it's clear that the maple syrup law was created because people in power — white people — are the ones who primarily profit from the maple syrup industry. The juxtaposition is both embarrassing and revealing; exposing a country that still grapples with reconciliation — uttering all the politically correct words, but unable (or unwilling) to put them into action.

St-Louis, who is of Mi’kmaq, Acadian and Scottish descent, is the executive director of Sacred Fire Productions, a non-profit arts organization that supports Indigenous artists with professional recognition, accelerates social inclusion and breaks down stereotypes. She also runs the Ashukan Cultural Space in Old Montreal, which exhibits and sells local, fair-trade Aboriginal art, including moccasins, soap, jewelry, furs, beading, greeting cards and more.

But there's a problem, says St-Louis — that space is surrounded by dozens of small tourist shops that sell cheap, mass-produced knock-offs of Ojibwe dream catchers and Inuit soapstone carvings, at a fraction of the cost of authentic crafts produced by local Indigenous artists. This is unfair competition that devalues the cultural and spiritual work of Indigenous artisans.

“Shops buy cases and cases of dream catchers made in Pakistan or wherever, where they pay 25 cents a dream catcher... and they sell it for $7," she explains. "In Indigenous communities, dream catchers have a narrative and a spiritual connection to the Ojibwe nation, the Ojibwe land, and they’re supposed to be created while reciting a prayer."

While the Canada Council for the Arts recognizes that both the traditional and contemporary cultural and artistic practices of Indigenous peoples belong to them, as spelled out in the UN Declaration on the Rights of Indigenous Peoples (UNDRIP), that acknowledgment has not been followed with a concrete action plan that would protect that cultural property.

In this regard, the United States is ahead of Canada, having created a truth-in-advertising Indian Arts and Crafts Act in 1990 that prohibits the sale of any art product that falsely suggests it is “Indian produced, an Indian product, or the product of an Indian or Indian Tribe, or Indian arts and crafts organization.” Non-Indigenous individuals caught falsely misrepresenting traditional items such as jewelry, pottery, baskets, carved stone sculptures, woven rugs and clothing, could face up to $250,000 in fines or a five-year prison term in the States, while businesses faces fines up to $1 million.

Canada has no such financial deterrent, beyond the Competition Bureau's broad rules against false and deceptive marketing practices.

Canada must protect what it willingly endangered

According to St-Louis, there can be no "true reconciliation without economic reconciliation.” By failing to ban such business practices, and implement UNDRIP fulsomely, she says the government is "enabling cultural appropriation of the worst kind," in which countries that have no connection to Indigenous culture, profit from it without permission or compensation.

That inaction, she argues, enables the deplorable living conditions of many Indigenous communities that could otherwise benefit from the revenue generated from their own handiwork.

“If the Government of Canada would protect the heritage that they openly admitted to destroying, then we’d have a greater chance of building a fair-trade economy,” she says. “There’s more to reconciliation than just talking about it, we need to do something about it. We need to stop that importation, so our Indigenous items are allowed their rightful space in the huge tourism industry.”

The destruction of culture St-Louis alludes to is the Indian Act of 1876, and the cultural genocide that followed. Under the Potlatch Law, for example, it became illegal for Indigenous communities to produce artwork such as peace pipes, ceremonial masks and totems; to speak their native language, or engage in any other kind of cultural practice.

While the legislation was abolished in 1951, it had devastating and lingering effects on Indigenous communities, depriving an entire generation of their cultural heritage and rendering it invisible to non-Indigenous people. The proliferation of fake Indigenous souvenirs into the Canadian market is partly because of this invisibility.

Collaborating on an online solution

To help tackle the problem, St-Louis has recently collaborated with Jay Soule, professionally known as CHIPPEWAR — an Indigenous multimedia artist from the Chippewas of the Thames First Nation, located outside of London, Ont. Together, they're creating a bilingual website on cultural appropriation that serves as an awareness campaign and call to action.

'Reclaim Indigenous Arts,' launched last month, provides viewers with all the information they need on the topic and specific actions they can take to stop it, including sending letters to the prime minister and city councillors, and restricting their shopping to pre-approved gift shops.

“They (the government) are the ones that created this problem,” says Soule. “They’re the ones that confiscated our art and culturally significant items for the better part of 70 years...The government set the precedent for other people to think that taking work from Indigenous peoples like this is okay.

"When the people at the top are the largest offenders, it creates a trickle-down effect that allows that international market to basically devalue our work.”

The Reclaim Indigenous Arts website draws inspiration from Canadian shark fin bans, says Soule. Following public outcry, Toronto's city council voted to ban the possession, sale and consumption of shark fin in 2011. Since then, its sale has also been banned in 17 other Canadian municipalities.

“I want to give people the opportunity to correct their behaviour,” Soule says. “I want them to know that the letters on the website are not letters of demand. I don’t want to hurt small businesses or individual people. If (the buyers) are ethical, once they’ve been made aware, I believe that they’ll stop.

"And if legislation is enacted and people still don't comply with it, then we will have the legal means to do something about it."

Toronto’s Pacific Mall was recently the site of a major clampdown on fake goods after a U.S. report listed them as a major source of a variety of pirated, knock-off goods. Since that report, the mall's administration has promised to implement "stringent internal measures to stop imitation goods from being traded or sold in the mall," and has "issued written advisories that warn all store owners suspected of trading or selling imitation goods of possible legal consequences for engaging in such practices."

“Why did this story make international headlines?" asks Soule. “Why are these store owners facing legal repercussions for selling imitation goods, yet we’re not having the same conversation over the sale of fake Indigenous art?”

Soule emphasizes his quest to ban non-Indigenous art is in support of communities like the one St-Louis has created, where Indigenous art can be showcased.

“My own work really doesn’t represent the things that I’m trying to protect,” he says. “I’m doing this for the protection of my friends, my colleagues, and my peers; artists who struggle to make this stuff and struggle to make a living.” 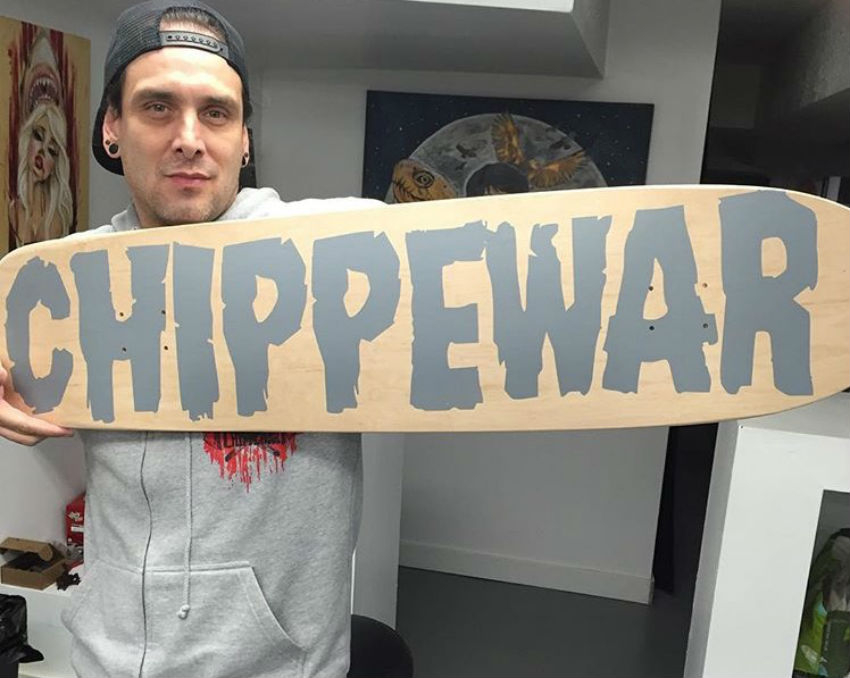 The cost of importing imposters

Similar issues have popped up in other countries where the suppression of Indigenous culture has enabled the proliferation of knock-offs. There is a booming trade in fake Indigenous art in Australia, where roughly 80 per cent of what is sold as Aboriginal art is made in China or Indonesia.

“Arts and cultural practice is probably the largest independent economy for Indigenous peoples and there’s not much room to be part of the cultural economy here,” says St-Louis. “Indigenous people are competing with fake Indigenous items or Indigenous-looking items that are mass-produced in China, Bangladesh and India and imported into Canada without any consideration to their impact of maintaining poor living conditions in Indigenous communities, where many only have our culture to live off today.”

St-Louis, who recently served as an advisor to Quebec’s minister of culture to help renew the province’s policy on the protection and promotion of its language and culture, which hadn’t been updated since 1992, speaks of the urgent need for a conscious consumer strategy.

“There’s an education that needs to take place,” she says. “Cross-section leadership across levels of government is required to make this happen. On the municipal level I’d like to see conscious consumerism campaigns on the sides of buses, or in city tourism campaigns and slogans. For example, ‘Look for the 100 per cent Indigenous tag,’ ‘If they can’t tell you the name of the artist, it’s not made by an Indigenous person’, etc.

"I think Old Montreal, Old Quebec, Toronto, Winnipeg — all those cities that get millions of visitors a year who are looking for Indigenous items — we need to be honest and sell them Indigenous items and not Chinese Indigenous-looking items. That’s fraud."