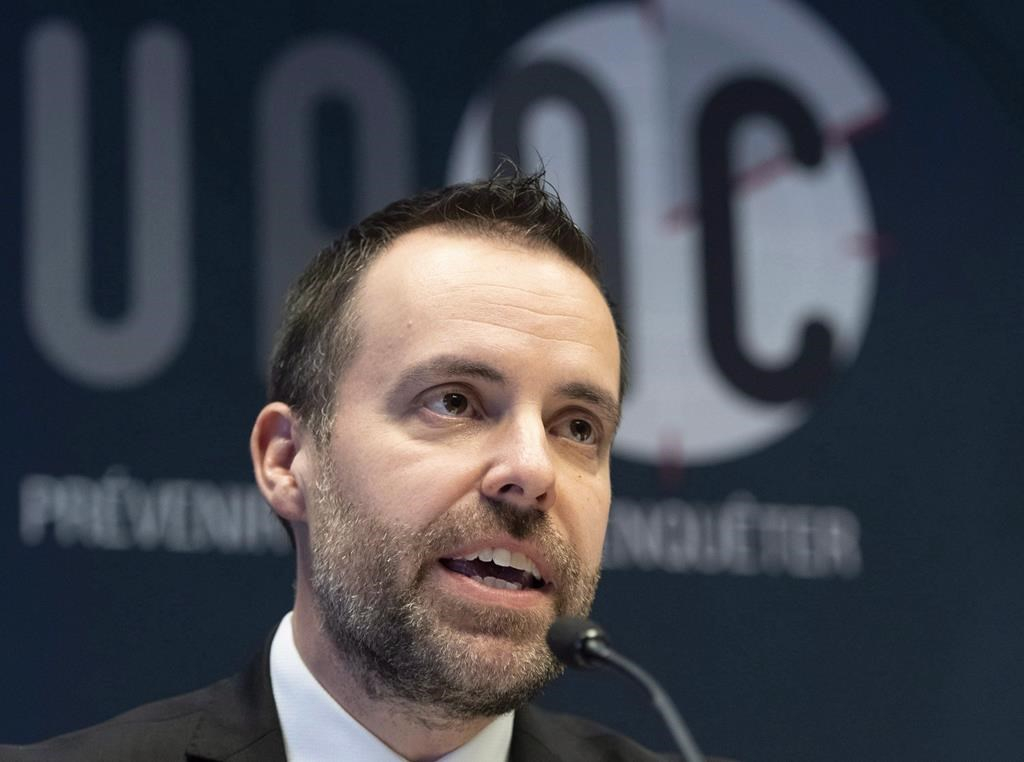 Seven years after it was created, Quebec's anti-corruption unit is having difficulty recruiting members and filling a number of positions.

Frederick Gaudreau, the interim head of the agency known by its French acronym, UPAC, admits unflattering coverage in the media hasn't helped.

"Yes, it's a reason, I don't want to deny it," Gaudreau said at a recent news conference during the presentation of the unit's annual report. "I won't hide from you that it's a challenge to recruit people."

The report also revealed that there was a 30 per cent rate of voluntary departures among permanent employees at UPAC.

The unit, which has about 350 employees, was created by former premier Jean Charest in 2011 amid allegations of corruption in Quebec's construction industry and the alleged illegal financing of political parties.

Gaudreau recently took over as the unit's director after his predecessor, Robert Lafreniere, tendered his resignation on Oct. 1 — the day of the last provincial election.

No reason was given for Lafreniere's decision to step down. He had been at the head of the unit since it was created. He was reconfirmed in the job in 2016 and his mandate was supposed to end in 2021.

However, Quebec media have been reporting on turmoil within the anti-corruption unit for months, and the reports suggest the unit has a difficult work environment with low morale.

No arrests have been made in either investigation and Charest has denied any wrongdoing.

Gaudreau was coy when asked on Thursday if the two men are still being investigated.

A Liberal member of the Quebec legislature, who says he was "destroyed" after being targeted by UPAC, is suing the provincial government for $550,000.

In October 2017, Guy Ouellette was arrested by the anti-corruption unit on suspicion he was responsible for leaking sensitive information about the investigation into Charest and Bibeau.

Ouellette, a former provincial police officer, denied the claims and was never charged.

Gaudreau admitted that the negative media coverage has affected the recruitment of officers to join the unit, but it's something he hopes to change.

"My objective, I would say, is to assure the population that the work is being done properly in the field (and) remove any uneasiness and any preoccupation that people have had in the past," he said.

An internal report in December 2017, which was leaked to the media, talked of palpable tensions and a lack of confidence in management among the unit's employees.

Gaudreau said about a dozen positions for investigators and several support staff positions now need to be filled.

He noted that there's little interest among the younger generation of police officers to fight against corruption because of the complexity of the inquiries, which take a lot of time.

"People who have a tendency to work on short-term dossiers are not necessarily motivated by our inquiries," he said.

Gaudreau said that, while he didn't have exact figures, a large portion of the police being hired by UPAC don't have any experience handling investigations.

Gaudreau also said he hasn't excluded the possibility of going outside Quebec to look for investigators.

"We're open to considering anything," he said. "What we are looking for are highly-motivated people who are best qualified to do this type of an inquiry."

— With files from Caroline Plante

Liberals need to go in order to clean up Quebec politics: corruption whistleblower