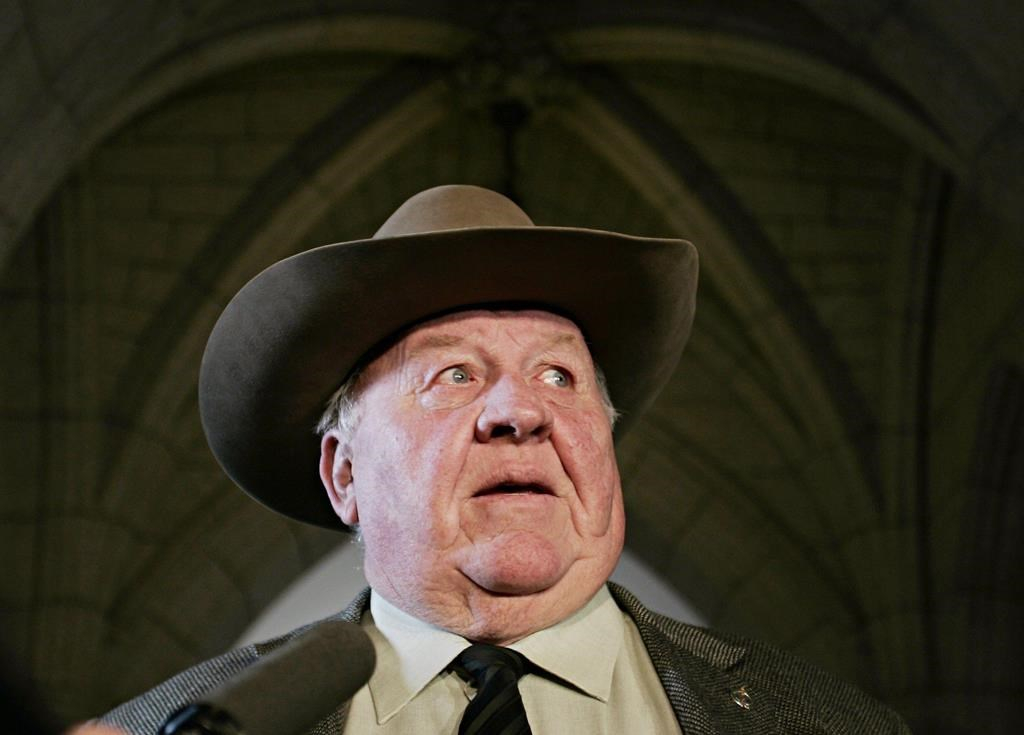 A former Alberta MP known for his cowboy hat and controversial positions on a number of issues has died.

Myron Thompson — who supported the American-led war in Iraq, opposed gun laws and same-sex marriage, and argued for stronger animal protection and child pornography legislation — was 82.

Thompson served as an MP for the Wild Rose riding from 1993, first for the Reform Party and later for the Conservatives, until he stepped down in 2008.

"I don't think anybody, no matter what side of the political argument that you may have been on with Myron,... would ever doubt that he loved the people that he represented," Nixon said in a phone interview, noting that Thompson had been fighting cancer.

"He got up each day and fought for them the best way that he knew how."

When the Reform Party passed a policy at its national convention in 1994 to deny family benefits to same-sex couples, Thompson said, "I do not hate homosexuals — I hate homosexuality."

In 2001, he told question period that he felt too many RCMP officers were patrolling national parks searching for poachers instead of hunting in cities for terrorists. At the start of the U.S. war in Iraq, Thompson, whose son Dennis was a U.S. combat soldier in Iraq, told a pro-American demonstration in Calgary that Canada should be supporting the war.

And when controversy erupted in 2006 over a decision to bar media from the base where the bodies of Canadian soldiers were arriving from Afghanistan, Thompson declared he would shoot any media if they tried to come on site to cover a dead son of his.

''I do speak my mind and that's never changed,'' Thompson said in a 2006 interview for a story about whether Conservative MPs felt muzzled by their party.

He was born in Colorado and said he'd once tried out for the New York Yankees. He moved to Canada in 1968 and served as mayor of Sundre, Alta., before moving on to the federal scene, later returning to municipal politics in the town after his time as an MP.

In 2004, when U.S. president George W. Bush visited Ottawa, Thompson met with him to tell him there were Canadians who supported the war in Iraq.

According to Thompson, the president thanked him and also wanted to know if Thompson was from Bush's home state.

''Bush said, 'I really like you. You are a straight-shooter. Are you sure you're not from Texas?'" Thompson recalled after the meeting.

In 2007, Thompson presented a petition to Parliament with 110,000 signatures calling for tougher laws against animal cruelty. The names had been collected by Tamara Chaney of Didsbury, Alta., who was outraged after a horrific case of animal abuse involving a family dog.

"He was passionate about animals. He was one of the most gentle people that I've ever seen when you watched him interact with animals ... so that's something he fought for," Nixon said.

"Myron Thompson was a colourful and straightforward Westerner who well served the West, his constituents, and the country as a member of parliament," former Reform Party Leader Preston Manning said in an emailed statement.

"Sincere condolences to Dot and the rest of his family, with deepest thanks for sharing Myron with us."

"It was a privilege to serve with Myron in Parliament. A true character, Myron will be deeply missed," Kenney said on Twitter.