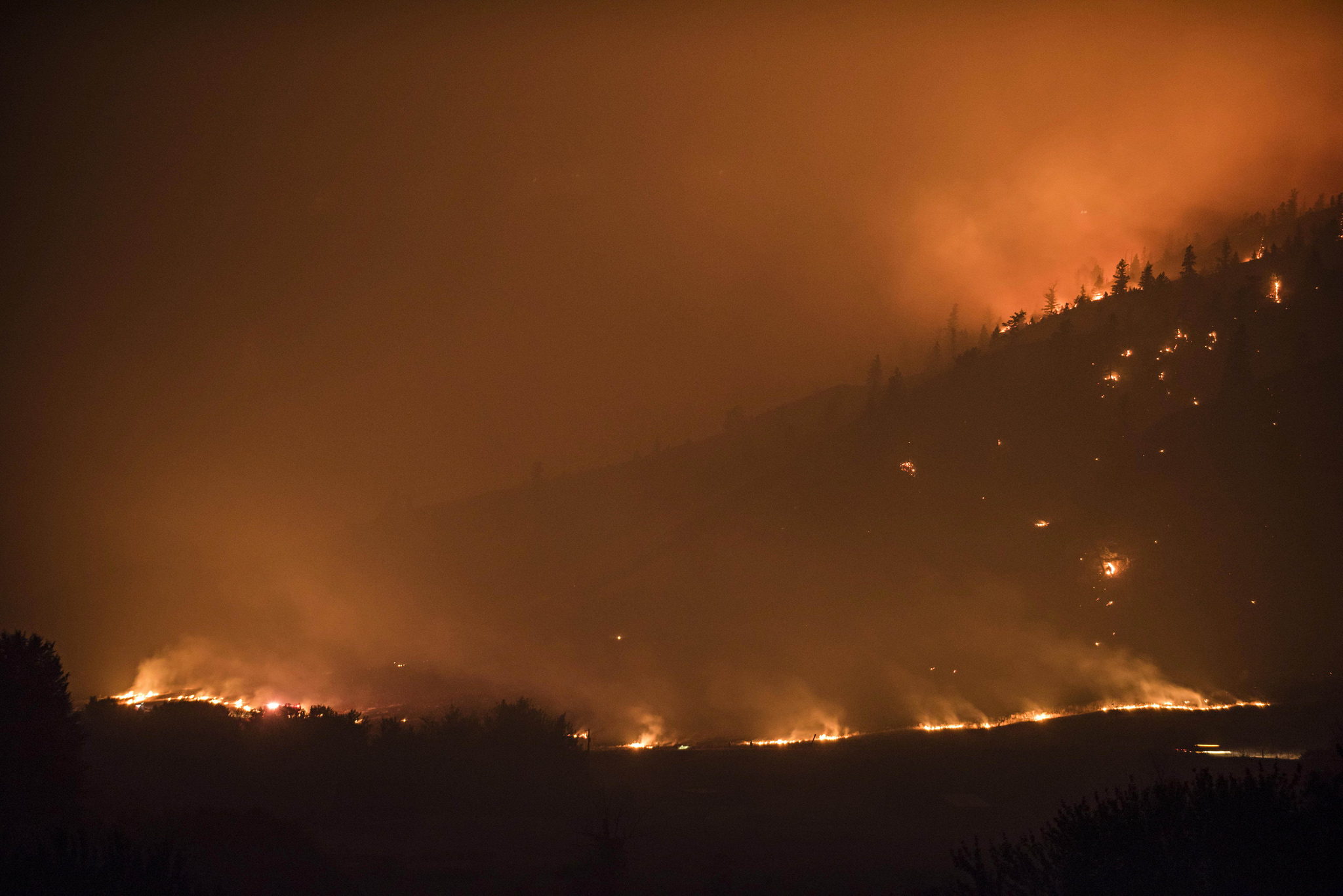 Humanity's contribution to climate change made the catastrophic wildfires across the western Canadian province of British Columbia in 2017 far worse, says a new study by Canadian scientists.

The devastating season saw an area go up in flames in B.C. that was seven to 11 times larger than what would be expected without human influence on the climate, according to scientists at Environment and Climate Change Canada (ECCC) and the University of Victoria (UVic).

The 2017 wildfires burned up over 12,000 square kilometres, forcing 65,000 people from their homes, exposing millions to harmful smoke-filled air and plunging the province into a state of emergency for months.

It was the most disastrous fire in recent memory, breaking records going back six decades — until 2018 brought even larger wildfires.

ECCC and UVic researchers have now completed a study showing how anthropogenic, or human-caused, climate change dramatically increased the risk of wildfires in Canada’s westernmost province. The study showed that humanity’s effect on the climate increased the area burned in 2017 by a factor of seven to 11.

The global scientific consensus is that climate change is being furthered by humans burning fossil fuels like oil, natural gas and coal, which dump carbon pollution into the atmosphere, trapping heat and warming the planet. They say extreme weather events like droughts, floods and wildfires are expected to increase, both in intensity and frequency.

"As the climate continues to warm, we can expect that costly extreme wildfire seasons—like 2017, in B.C.—will become more likely in the future,” said Megan Kirchmeier-Young, a research scientist at ECCC and an author of the study, according to a press release.

“This will have increasing impacts on many sectors, including forest management, public health, and infrastructure,” said Kirchmeier‐Young, who also works at the Pacific Climate Impacts Consortium at UVic.

The subject of the massive increase in forest fires has been a preoccupation for Canadian scientists, who have found that roughly four million hectares of land were affected by forest fires in Canada over the three years to 2016, well above the long-term average.

Humanity's contribution to #climatechange made the catastrophic wildfires across British Columbia in 2017 far worse, says a new study by Canadian scientists. @ottawacarl reports

In May 2016, a terrifying wildfire swept through Fort McMurray, Alberta, forcing an evacuation of at least 88,000 people, the largest in Alberta history and destroying at least $3.7 billion worth of property, more than twice the amount of the previous natural disaster on record.

Federal scientists in the Canadian Forest Service demonstrated in 2018 that large portions of Canada’s vast boreal forest could be at risk of dying off by the end of the century, as climate change will dramatically aggravate the risk of wildfires, drought and insect infestations.

The Intergovernmental Panel on Climate Change, which has written about the increased risk of forest fires posed by climate change, says humans have 12 years to dramatically cut their use of fossil fuels and emissions of carbon pollution, or risk much greater levels of extreme weather and poverty.

The latest study, titled “Attribution of the influence of human-induced climate change on an extreme fire season,” was first published Dec. 13 in the science journal Earth's Future, a trans-disciplinary, peer-reviewed publication, and announced by ECCC on Jan. 8, 2019.

In addition to Kirchmeier‐Young, it also counts ECCC’s Nathan Gillett and Alex J. Cannon, and UVic’s Francis Zwiers and Faron Anslow as co-authors.

They then demonstrated the risk factors connected with the wildfire season and the area burned, and found that the maximum temperature anomalies that were observed are over 95 per cent likely to be due to anthropogenic factors.

The scientists also found that extreme forest fires are more likely to intensify in future.

“As a result of increasing temperatures and increasing wildfire risk, extreme area burned amounts like 2017 in B.C. are expected to become more likely in the future. In fact, the 2018 wildfire season in B.C. burned more area than the record-shattering season of 2017,” the study reads.

“Since most of the area burned in 2018 occurred in the northern part of the province (compared to the southern region in 2017), the event attributions discussed above do not apply directly. However, it can be inferred that extreme warm conditions that, along with extreme dryness, contribute to high wildfire potential were made more likely by anthropogenic influence on the climate.”

BC has had the Carbon Tax for some time. Even Alberta Oil sands operations have had their Carbon Tax. Same with California. European countries have had their cap & trade for ages. Those taxes were promised to stop all fires, make everything green, increase glaciers, prevent hurricanes and tornadoes,reduce rain storms to light pleasant showers, stabilize the entire earth in the perfect climate and make unicorns happy. The only thing left for Carbon Taxes is to cure cancer. Fail.

It is just as possible that carbon taxes have actually increased these events. Carbon taxes were supposed to be the cure for everything, allowing humans to control climate. What is the perfect climate? The pefect climate in Rome is not the one for Montreal or New York or Vancouver or Rankin Inlet or Moscow or Sydney or New Delhi or Addis or Iceland. How is it possible that simply increasing the cost of living for everyone is going to achieve perfect climates for all those places?

Trudeau and barbie claim that letting them take our money will control climate. If so, they obviously know at what dollar point they will be able to create a perfect climate. THAT mens they are aware of some dollar figure that will let them be able to reverse climate changes. THAT means barbie and Trudeau taking our money makes them God. That last point is probably fairly accurate.

Carbon taxes are just as damaging as EV subsidies. Most intelligent consumers would like to have EV's, but we have too much taken because of carbon taxes to be able to afford a new car. Tomatoes at my ocal grocer were 99cents 2 years ago. Today? $3.99 . Much of that increase is due to carbon taxes.

It is wrong to punish Canadians for simply living. Assist us to adapt, to insulate, to buy new windows, to buy a newer car. Get rid of taxes rather than increase them and I / we will be better able to afford stuff to be more able to adapt to a changing climate. I am doing my small part. MY car is from S. Korea much of my food is from California or Mexico, my clothes from SE Asia or China. At least I am not contributing to manufacturing pollution in Canada. I don't fly, I don't go on holidays, I don't use a propane BBQ. Try as hard as you can to help Trudeau, barbie and these scientists. Don't buy Made in Canada.

"An average of 9,000 fires burn more than 2 million hectares each year in Canada. This is twice the average area burned in the early 1970's, and various modelling scenarios predict another doubling or more by the end of this century, because of warmer temperatures expected as a result of climate change."
(source: Natural Resources Canada, 2013-12-04: "Peatland fires and carbon emissions")
In 2015, wildfires burned 2,048,949 hectares of forest while the area disturbed by insects reached 1,777,318 hectares (2006 was the worst year for insects infestations as 12,190,134 hectares of forest were affected). It is estimated that the combination of the two events resulted in net GHG emissions of 247.1 million tonnes (Mt) of carbon dioxide equivalent (CO2e).
In Canada, total GHG emissions in 2015 were estimated at 722 Mt (CO2e). If accounted, Canada's total GHG emissions would have reached around 969 Mt CO2e in 2105.
(source: Environment Canada, 2017-09-28: "National inventory report 1990-2015: Greenhouse gas sources and sinks in Canada")
But Canada doesn't take into account GHG emissions from "natural disturbances" (e.g. wildfires, insect infestations) in its annual report to the UNFCCC. The federal government (contrary to its own scientists) doesn't consider human activities to be responsible in the increase of wildfires and other factors affecting Canadian forests.
"Canada has indicated that its accounting for managed forests toward its emissions reductions target will exclude the impacts of natural disturbances because those impacts are non-anthropogenic."
(source: "Canada's Second Biennial Report on Climate Change" to the UNFCCC, April 2016, Section 5.1, footnote)
Note: For greenhouse gas reporting, the "managed forest" area in Canada is about 226 million hectares, or 65% of Canada's total forest area. All other forests in Canada are considered to be "unmanaged".