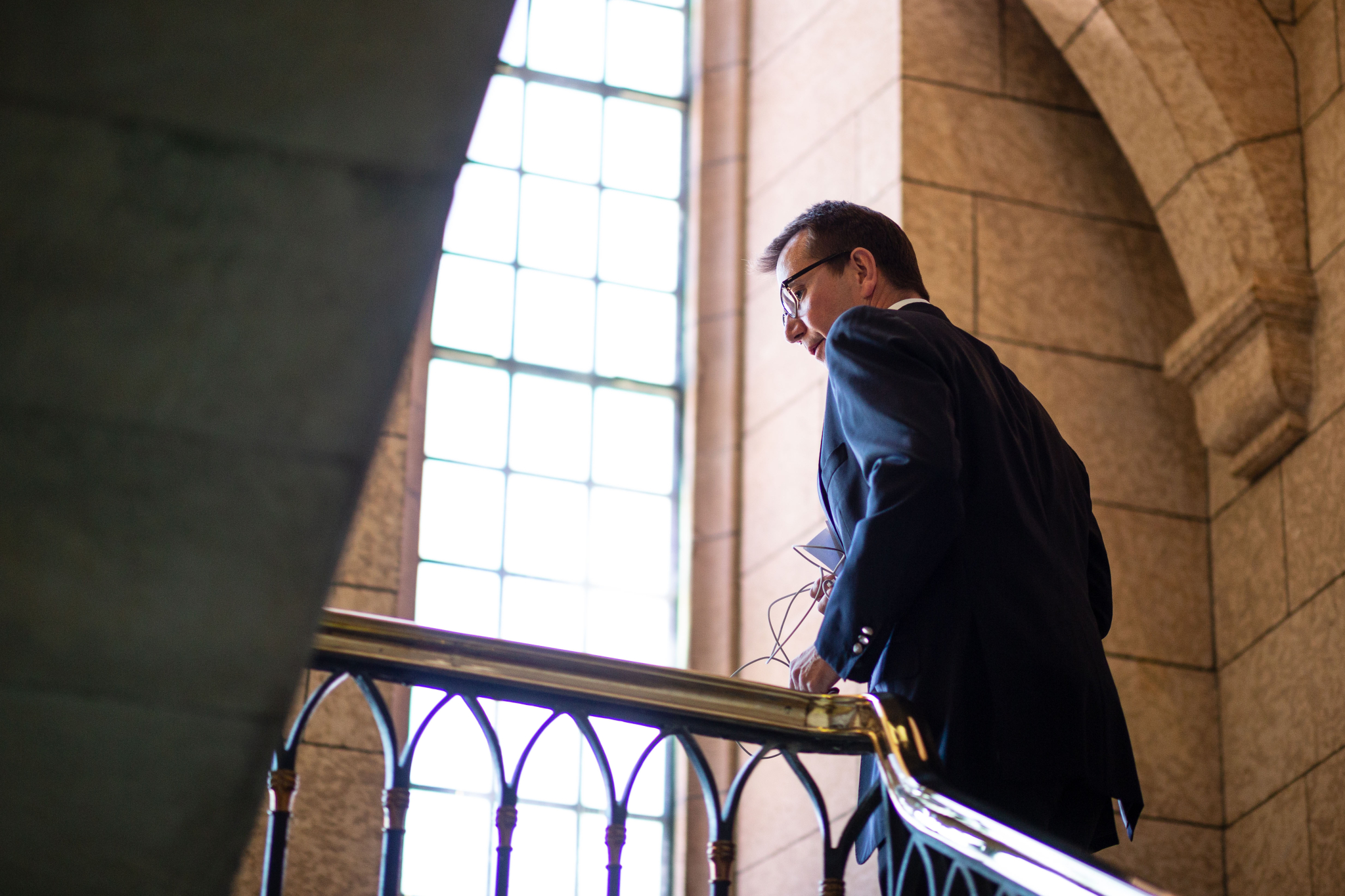 Treasury Board President Scott Brison heads to a cabinet meeting in Parliament in Ottawa on June 19, 2018. Photo by Alex Tétreault
Previous story
Next story

Scott Brison is quitting a political career he loves to spend more time with a cherished family that politics made possible.

After 22 years representing the Nova Scotia riding of Kings-Hants — initially as a Progressive Conservative MP before jumping to the Liberals in 2003 — Brison told The Canadian Press it's time for a change. He's decided not to seek re-election this fall.

He's not sure whether he'll remain a Liberal MP until the Oct. 21 vote but he will be resigning shortly from Prime Minister Justin Trudeau's cabinet, where he serves as president of the Treasury Board.

"I've informed the prime minister that I'm not running again but I've also told him that I want to relinquish my cabinet responsibilities in a timely manner and support transition to a new minister," Brison said in an interview. "My personal view is that the prime minister and the government are best served by ministers who will be running in the next election."

He said he's announcing his decision now to give Liberals in his riding time for a nomination contest to choose who will carry the party's banner in the coming election.

Brison's departure will trigger at least a small cabinet shuffle, although there is speculation that Trudeau will make bigger changes to his front bench as early as next week to put it in fighting trim for the Oct. 21 vote.

In an era of mounting cynicism about politics, Brison is passionate about its ability to make a difference in people's lives.

"I believe now, more than ever before, that government matters, that members of Parliament matter and that politics matters. There's no area of work where you can make more of a difference in people's lives," he said.

So why retire from the political fray he so evidently loves? He offered three reasons.

"They say that life begins at 50. Well, I'm 51 and I'm ready for new challenges," he said, adding that he'll likely wind up back in business, where he once worked as an investment banker.

Beyond that, he said he wants to leave when he's "on top" of his political career, not waiting to be carried off "in a body bag or air-lifted off the field."

But above all else, he said the decision is about — and was made together with — his family, husband Maxime St. Pierre and their four-year-old twin daughters Rose and Claire.

"I think Max and Rose and Claire, to me they're miracles."

Brison made history as Canada's first openly gay federal cabinet minister and again as the first federal politician to wed his same-sex partner. Yet homosexuality wasn't even legal in Canada until two years after he was born.

"I spent the first two years of my life destined for a life of criminality," he quipped.

But Brison became emotional as he reflected on the transformation in gay rights since the Charter of Rights and Freedoms was entrenched in Canada's Constitution in 1982 and his own part in subsequent debates that resulted in equality for same-sex couples.

"I thought accepting the fact that I was gay was going to mean, among other things, that I would not be able to ever enter public life or successfully accomplish the kinds of things that I wanted to do. I thought it would mean that I would never have a spouse or children.

"I just feel very lucky in that I've been able to be part of changing history ... during a time when these decisions have been made that have actually made a difference not just in the lives of Canadians broadly but have made a direct difference in my life."

And those decisions, he emphasized, were made by politicians, underscoring his belief that "politics matters, government matters, leadership matters and good people can make a big difference in public life."

For his own part, Brison believes he was able to make a difference in each of the seven mandates the people of Kings-Hants gave him, whether it was as an opposition MP in the "nosebleeds" of the House of Commons or on the front bench in the governments of Paul Martin and now Trudeau.

He denied that his decision to quit politics is in any way related to the current controversy surrounding his role in the suspension of Vice-Admiral Mark Norman, the military's second-in-command who has been charged with leaking cabinet secrets. Brison is expected to be a star witness when the case goes to trial in August — just weeks before this year's election campaign officially starts.

"If that issue had never occurred, I would be making the same decision that I'm making now," he said, refusing to further discuss issues that are now before the court.

Brison has admitted to pressing the newly minted Trudeau government in 2015 to suspend a $700-million plan to build a new supply ship, a move that the RCMP alleges prompted Norman to leak secrets to Quebec's Davie Shipbuilding so it could pressure the Liberals into restarting the project.

But he's told the House of Commons that he was simply doing his job as Treasury Board president, the minder of the public purse, to ensure taxpayers were getting good value for the ship contract.

Brison has also denied accusations levelled by Norman's lawyers and echoed by opposition MPs that he lobbied on behalf of Halifax-based Irving Shipbuilding, which wanted the Liberals to cancel the Davie deal and hire Irving for the supply-ship job instead.

Thank you for your public

Thank you for your public service, Mr. Brison, and congratulations on your family. Since you are obviously well-connected politically, and the loving thoughtful father of young children, you should now (in my view) invest a small amount of time, before jumping into business pursuits, inquiring into and informing yourself of the risks faced by your daughters, due to climate change. What you learn, if you invest in an actual unbiased consultation with climate scientists, will for sure scare you for those vulnerable young girls you love.

You should then use your connections and take advantage of your credibility, to help influence more urgent political action on the IPCC report(s). Although your government has talked a good game, they have still obviously had fossil fuel insiders as their information source regarding climate science, national economy, and the future of energy resources in Canada and the world. Mr. Trudeau, as a loving parent himself, should be taking every possible action to bring in science educators for himself and the House of Parliament, and Senate, to make sure that our government represents, advocates, and acts for the children of this land, our future, and our beloved.

There is no excuse in this information era, for not taking the time to pursue unbiased scientific information from science experts, of which there are plenty in Canada (perhaps despite Harper's efforts). It is when we don't take our incredible good fortune for granted, that we are most moved to act to protect the most vital elements in our lives: our children, our health, our environments, our wilderness. Money should never win out over all of these things. Mr. Brison, you seem like a man who shouldn't be taking things for granted.

Mr. Trudeau talks about a balanced approach, without ever conceding that the situation has been completely and increasingly unbalanced for several decades, in favour of exploitation, rather than preservation, and needs a much sharper shift in the other direction. It's too late for a so-called balanced approach, which leaves Canada's government, and other's, steering us straight for a cliff, maybe having just lifted the foot off the accelerator slightly. We need all responsible leaders and representatives to instead steer us away from that cliff, before our kids have no future, or at best, a severely compromised situation, compared to what we were so lucky to inherit.

Thanks again Mr Brison, and thank you to your family for having shared you for several years of public service.