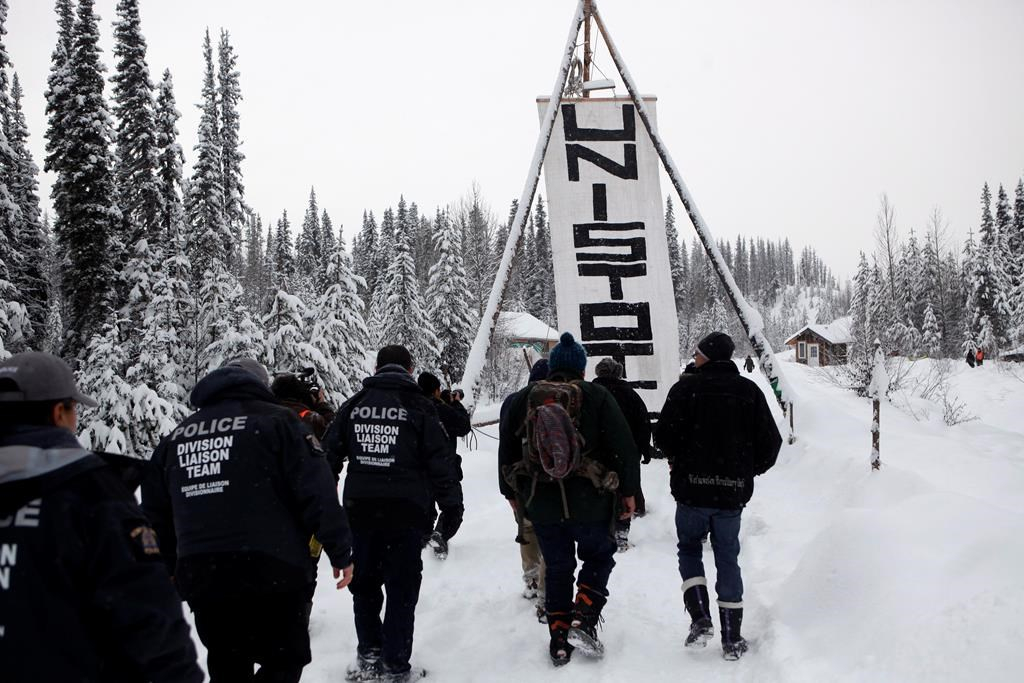 Hereditary leaders of the Wet'suwet'en First Nation have reached a tentative deal with RCMP, quelling some fears of escalation after police made several arrests at a nearby checkpoint earlier this week.

The chiefs say members will abide by a court injunction granting the Coastal GasLink pipeline company access to a bridge that had been blocked, if RCMP agree to leave intact the nearby Unist'ot'en healing camp in northern British Columbia.

They plan to meet with RCMP again Thursday to discuss details such as retaining a gate that residents and supporters of the camp say is vital to their safety.

Residents and supporters say the healing camp was established in 2010 and is an important place for people to heal and connect with the land. Some left the dining hall of the three story building in tears or embracing one another.

Brenda Michell, whose daughter Freda Huson was named in the injunction and lives at the camp, says it has been a very difficult few days.

"We tried to keep positive but the unknown out there was scary," she said. "We didn't know if they were going to come storm this gate next."

She pointed to sheets that had been draped across the windows of the dining hall, where moose stew, salmon and boar are served to residents.

"This is our home, we should feel safe in our home," she said.

On Monday, 14 people were arrested after the Mounties took apart a different gate that blocked access to an area where Coastal GasLink wants to build a natural gas pipeline.

The Coastal GasLink pipeline would run through the Wet'suwet'en territory to Kitimat, B.C., where LNG Canada is building a $40-billion export facility.

TransCanada Corp. says it has signed agreements with the elected councils of all 20 First Nations along the path, including the Wet'suwet'en.

Premier John Horgan said Wednesday when plans for the LNG export facility were announced in October the B.C. government concluded all the conditions for the project to proceed had been met. He said the government was mindful of the opposition at the Unist'ot'en camp but has been in dialogue with the hereditary chiefs.