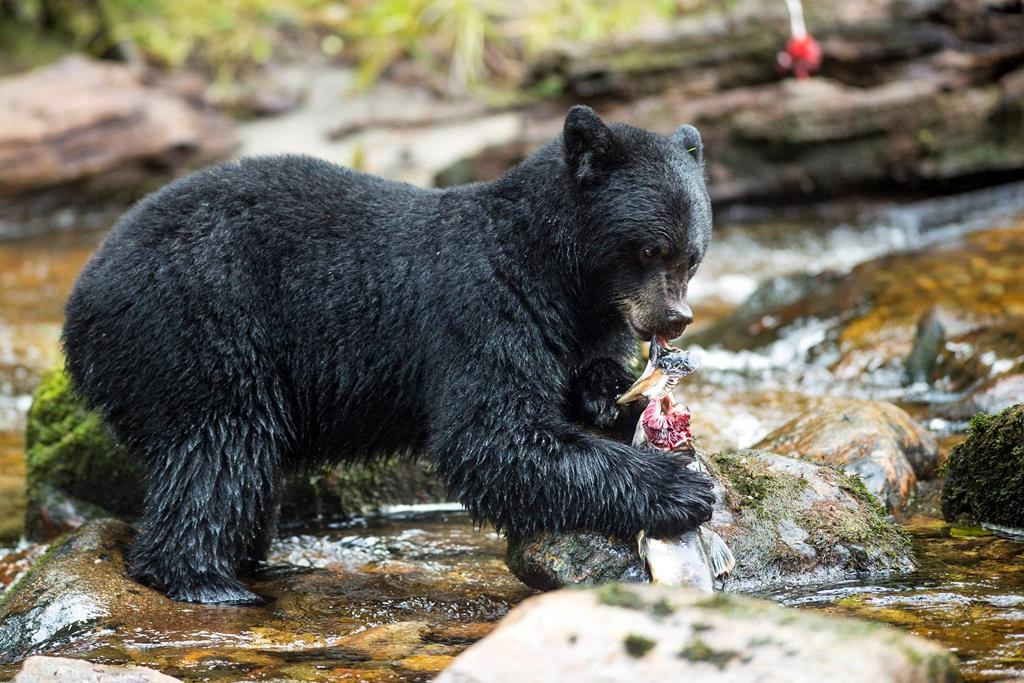 A black bear catches a fish in this undated handout photo. Handout photo by April Bencze
Previous story
Next story

Black bears need access to different species of salmon rather than huge numbers of a single variety in order to be healthy, a new study by Canadian researchers indicates.

Lead author Christina Service said if bears have access to a "portfolio of different salmon species" then the animals have access to more food for a greater part of the year.

"It is the equivalent of humans going to an all-you-can-eat buffet for just a couple of days versus having one good meal a day for many months," said the PhD candidate from the University of Victoria, adding that different species of the fish have different run timings and use different habitat.

When they have access to the fish for a larger part of the year, they end up eating more salmon overall and are in better health, she said.

The team of researchers used chemical techniques on hair samples from 379 black bears and 122 grizzly bears between 2009 and 2014 to estimate their salmon consumption, which showed population productivity and health.

They studied animals across a 22,000-kilometre stretch along coastal British Columbia's "Great Bear Rainforest," in collaboration with the Wuikinuxv, Nuxalk, Heiltsuk and Kitasoo/Xai'xais First Nations.

With bears hibernating in winter, they have only certain windows where they're able to eat, Service said.

So by having access to salmon earlier in the year bears can start fattening up sooner, she said.

Study co-author Chris Darimont said researchers have expressed concern about the health of all salmon populations.

"It's a difficult time to be a salmon these days with climate change, reduced ocean productivity, over-exploitation, diseases from salmon farms and neglect in management," he said.

Service said the federal government should think about the management of fisheries in a holistic sense.

This means thinking of fisheries as benefitting not just commercial and recreational interests but other wildlife and ecosystems too, she said.

"We need to consider species diversity and not just abundance."

So not just those that are easy to produce in hatcheries and commercially valuable but the smaller runs too, she said.

She said research shows the more variety of salmon that bear eat, the bigger they get, the more offspring they are able to have and the better those offspring do.

Bears play a really important role in the moving of nutrients, she said, explaining that salmon are moved from water to land and bears act as gardeners by fertilizing the ground with fish carcass.

Nutrients from salmon carcasses not just help trees but other species too, she said.

"It is important to care about bears because they are bears and they have intrinsic value, but the bear-salmon relationship is also very important to ecosystem," Service said.