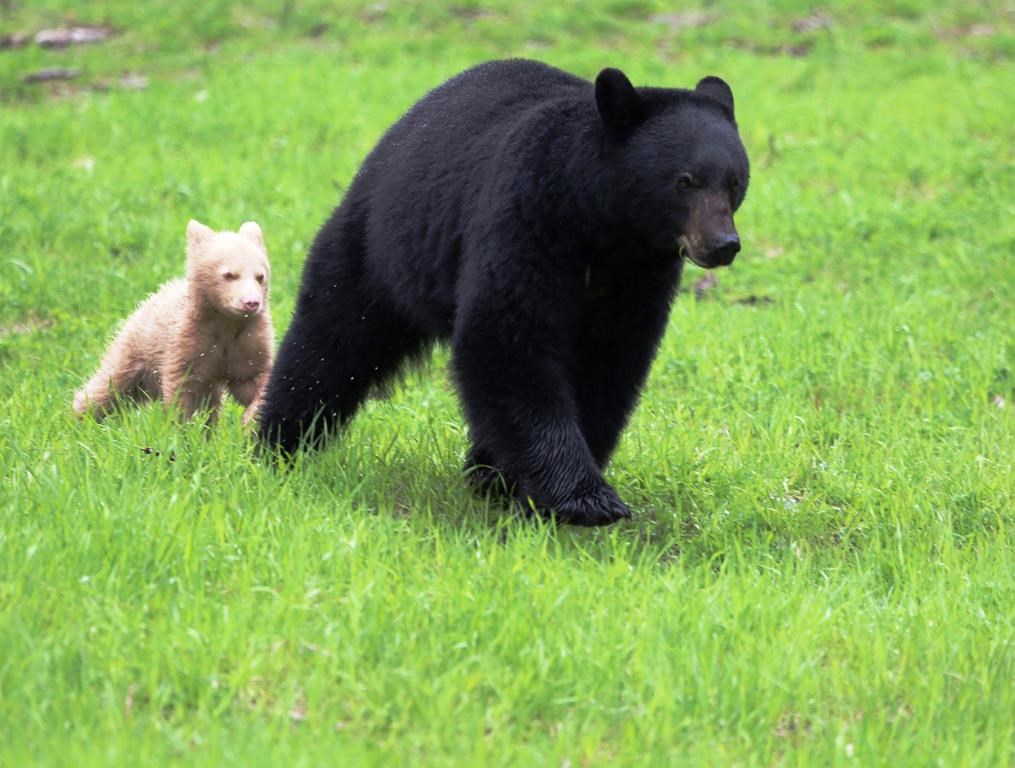 A rare-cream coloured bear follows its mother near Whistler, British Columbia in June 2016. Photo by The Canadian Press.
Previous story
Next story

Bear biologists are trying to demystify the genetic makeup of a rare cream-coloured black bear cub spotted near the resort community of Whistler, B.C.

Arthur De Jong said he saw the cub frolicking with its mother on Whistler-Blackcomb mountain last Thursday, a couple of days after a guide first caught a glimpse of it.

"I made some approximations, knowing where the best food supply is, and on a hunch I just got lucky and caught the two for a 45-minute span between meetings," said the environmental planning manager for Whistler-Blackcomb.

He said such a unique bear had never before been seen in the ski area and he snapped some photos to send to bear biologists.

De Jong said several experts are trying to determine whether the cub, which is about five months old, is albino or a kermode bear, which live on British Columbia's north and central coast and are also known as spirit bears.

So far, they believe it's albino because unlike white kermodes, the cub does not have a black nose or pigmentation.

"It's not white, its got a caramel, light, sort of brownish sheen to its fur," De Jong said, adding biologists want to see photos of the cub's eyes because a "pink-blue colour" would mean it's albino.

"I've repeatedly heard from various bear experts that its (fur) colour is the result of recessive genes from both parents. The mom is very much a black bear."

De Jong is nervous that the "little guy" may not survive for long and could become habituated to people and garbage.

"It may not be with us in the next few weeks. Cubs have about a 50 per cent chance of survival in year one. It's a rough life," he said.

"The bears are going into mating season and that's when the cubs are at a very high risk because the males potentially kill the cubs and that'll force the mother to make some adjustments in their patterns of movement."

The mother has been seen in the area for four or five years, he said, adding the pair has moved about looking for food and were also seen in Garibaldi Provincial Park and a golf course.

De Jong said people will want to venture off in hopes of seeing the cub, but becoming habituated to humans would markedly reduce the animal's chance of staying alive.

"The fear mechanism that allows them to survive would be broken and he would likely not live long," De Jong said. "If they're really close to people it means they're into garbage. Our waste has so much more fat content compared to their natural food supply that it's like crack. They get it and it's imprinted and then the fear mechanisms break down."

Conservation officer Simon Gravel, who covers the Whistler area, said he's worried that selfie seekers will flock to the mountains to search for the cub.

"We really advise against any intent to find and approach this bear. It would be disrespectful for the bear and contribute toward a potential conflict situation. That's what we want to avoid at all price."

Anyone who wants to see bears in the area should take a guided tour and become educated about the animals, Gravel said.