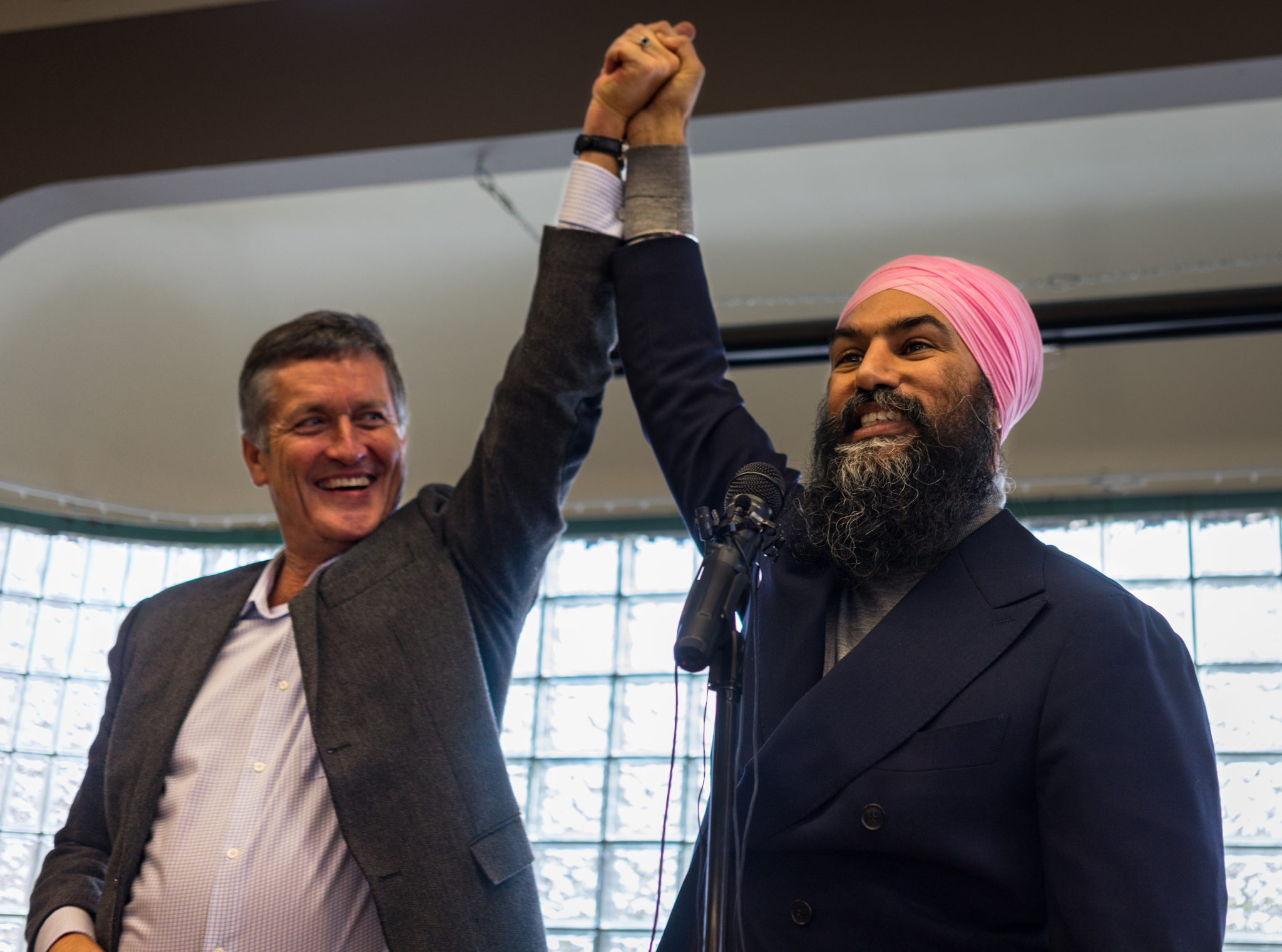 Jagmeet Singh and Svend Robinson appear at an event in Burnaby on Jan. 19, 2019. Both were on the campaign trail. Photo by Michael Ruffolo
Previous story
Next story

NDP Leader Jagmeet Singh was in full campaign mode on Sat. Jan. 19, as he got the backing of some star power in the middle of a byelection campaign in the Vancouver region.

Jagmeet Singh answers questions about why he expressed his support for the Coastal GasLink LNG pipeline, while he opposes the Trans Mountain oil pipeline and tanker expansion project. Singh was campaigning in Burnaby on Jan. 19, 2019. Video by Michael Ruffolo

Scientist David Suzuki offered some support and former NDP MP Svend Robinson also campaigned with Singh. Robinson is attempting to make a political comeback, running for the New Democrats in another nearby riding in British Columbia.

Singh is seeking to enter the House of Commons in a Feb. 25, 2019 byelection in the riding of Burnaby South, recently vacated by the departure of former NDP MP Kennedy Stewart, who was elected last fall to be the new mayor of Vancouver.

Voters in the Quebec riding of Outremont and in the Ontario riding of York-Simcoe will also go to the polls in byelections on the same date.

Any politician supporting fossil fuel expansion at a time when we have ~10 years left to reduce our carbon emissions 50% is delusional and will NOT get my vote.

The "communities that are

The "communities that are impacted" are worldwide, Jagmeet. No new carbon infrastructure!

He reminds me so much of

He reminds me so much of Notley. How can someone campaign leading people to believe they care about climate change and then support major infrastructure that would lock us into fossil fuels. Unless countries are forced to move to renewables, they will continue to use the non-renewable. To say that fracked gas is less damaging than coal, therefore it is better is absolutely ludicrous. Our country should be investing all the money they have spent promoting and forcing these projects through with more funding for retraining of workers in the oil and gas industry, scientific innovation, education and awareness campaigns of the impacts of our consumer of goods- driven society. We need to start focusing less on consuming of products but rather on consumers of services which support local jobs and have a less-intensive carbon-footprint. Additionally, there should be more funding and incentives for solar installation, electric vehicles and public transit infrastructure. To say that governments are consulting when there was no consultation with heriditary chiefs is misleading. The consultation should not be with small elected bands created by the Indian Act to further cultural genocide and then negate the consent of heriditary chiefs who have “title” to the territory is misleading at best, but in my opinion an outright lie by omission. Additionally, as a non-native, I have to say that the whole notion of “title” is also disrespectful of First Nations beliefs and that is that they do not see themselves as “owners” but rather as “keepers” for future generations. Approving any pipeline which locks in major fossil fuel infrastructure at a time that the IPCC has said we should not do, is absolutely a slap in the face to my child who is already living in a world with a completely different climate than what I grew up with. It is also a slap in the face to the people who have died and are dying due to extreme weather. At a time when BC has lost more land each year due to wildfires, it is unfathomeable to me that this “leader” would say that a pipeline promoting fracked gas which uses significant amounts of water is something the BC government should support.

An integral component of the

An integral component of the LNG industry is horizontal, hydraulic fracturing. There is nothing whatsoever environmentally friendly about fracking.

Shame Jagmeet for your lack

Shame Jagmeet for your lack of awareness that there can be NO new fossil fuel infrastructure if we are to achieve a less than 1.5 rise in global average temperature. Sadly you are also completely uninformed about the difference in legal authority between elected and Hereditary Chiefs. Elected Chiefs have jurisdiction only over land held on the reserves. The Hereditary Chiefs have constitutional authority over decisions that impact on their traditional territories, as confirmed in the 1997 Supreme Court Delgamuukw decision.

Really? This is what the

Really? This is what the youth & the 'Leapers' voted Mulcair out for?!!!!!
Mulcair said we needed a WW2 type momentum to fight climate change !