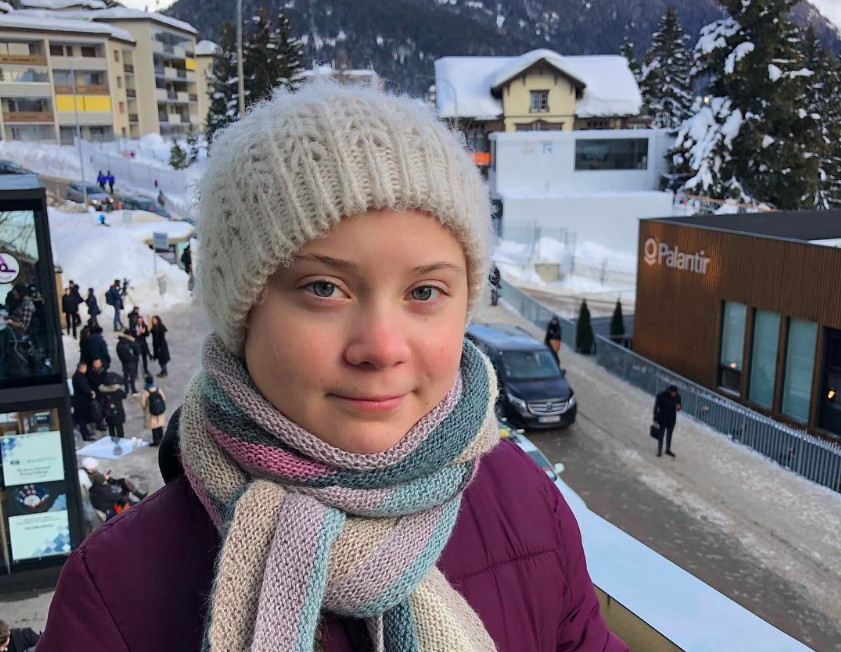 Photo of Greta Thunberg in Davos, Switzerland, on January 23 from Instagram
Previous story
Next story

“This Friday I can’t be there,” she told the Guardian. “So I will have to do it here in Davos, and send a message that this is the only thing that matters.”

Students around the world have been inspired by Thunberg, with thousands skipping school in Australia in November. Last Friday there were strikes in Germany, Belgium and Switzerland, where more than 20,000 students skipped school.

Missing gym class, geography and religion each Friday is something of a sacrifice for Thunberg, who says she loves school and can’t pick a favourite subject.

“I like all subjects. I love learning, which people maybe don’t think about me.”

She’s also been forced to give up her hobbies, as climate change activism has taken more of her time. “I used to play theatre, sing, dance, play an instrument, ride horses, lots of things.”

She’s sanguine, though, pointing out that climate activism is much more important: “You have to see the bigger perspective.”

Thunberg said she would like more students to join her strike. “That would have a huge impact, but I’m not going to force anyone to do this.”

In the UK, only a small number of students have so far begun strikes, including 13-year-old Holly Gillibrand in Fort William. But plans are now being made for a big strike on 15 February. Thunberg predicts there will be protests in many locations.

She believes parents should be supportive if their children tell them they’re striking on Friday. “Everyone keeps saying that the young people should be more active, and they’re so lazy, but once we do something we get criticised.”

The world’s scientists warned in October that, without a dramatic ramping up of action to cut emissions, global temperatures would rise by more than 1.5C above pre-industrial levels, with severe consequences for humanity.

Thunberg believes the older generations need to acknowledge that they have failed to protect the environment.

“We need to hold the older generations accountable for the mess they have created, and expect us to live with. It is not fair that we have to pay for what they have caused,” she says.

Thunberg has also called on business leaders and politicians to commit to “real and bold climate action”, and focus on the “future living conditions of mankind” rather than economic goals and profits.

In a video address for leaders attending Davos she says: “I ask you to stand on the right side of history. I ask you to pledge to do everything in your power to push your own business or government in line with a 1.5C world.”

Thunberg has been diagnosed with Asperger’s syndrome, which she believes helps her see the problem of climate change clearly.

“My brain works a bit different and so I see things in black and white. Either we start a chain reaction with events beyond our control, or we don’t. Either we stop the emissions or we don’t. There are no grey areas when it comes to survival.”

The school strikes last Friday were by far the biggest to date. In Germany, an estimated 30,000 students left their schools in more than 50 cities to protest, carrying banners including: “Why learn without a future?” and “Grandpa, what is a snowman?” One 17-year-old student in Kiel, Moritz, told Deutsche Welle: “We want to help shape and secure our future so that there will be another world for us to live in in 60 years.”

The 16-year-old activist behind the fast-growing School Strikes 4 Climate Action has taken her campaign to the streets of Davos, to confront world leaders and business chiefs about the global emissions crisis.

Greta Thunberg, whose solo protest outside Sweden’s parliament has snowballed across the globe, will join a strike by Swiss schoolchildren in the ski resort on Friday – the final day of the World Economic Forum.

Thunberg travelled by train for 32 hours to reach Davos, and spent Wednesday night camped with climate scientists on the mountain slopes – where temperatures plunged to -18C.

Having already addressed the UN Climate Change COP 24 conference, Thunberg is rapidly becoming the voice for a generation who are demanding urgent action to slow the rise in global temperatures.

As she travelled down Davos’s funicular railway from the Arctic Base Camp – while more than 30,000 students were striking in Belgium - Thunberg said the rapid growth of her movement was “incredible”.

“There have been climate strikes, involving students and also adults, on every continent except Antarctica. It has involved tens of thousands of children.”

Wow! They're back and this time they're 32,000 strong! These students want #climateaction and they are not going to stop marching until they get it!

Thunberg started her protest by striking for three weeks outside the Swedish parliament, lobbying MPs to comply with the Paris Agreement. After the Swedish election, she continued to strike every Friday, where she is now joined by hundreds of people.

Greta Thunberg speaks to the media at the Arctic Basecamp in Davos. Photograph: Ennio Leanza/EPA

In Belgium, 12,500 students went on strike last Thursday and plan to strike weekly until the EU elections in May. Some teachers were tolerant of the truancy. Patrick Lancksweerdt, in Brussels, said: “Education has to turn youngsters into mature citizens. By their actions, they proved that they are.”

School strikes also took place in 15 cities and towns in Switzerland. In Geneva, 12-year-old Selma Joly said: “Frankly, I would rather demand climate action than go to school. Otherwise, years from now, we may no longer be here.”

Janine O’Keeffe, who helps coordinate and keep track of the school strikes from her home in Stockholm, Sweden, was surprised at the scale of last week’s actions: “I am still in shock, actually – a nice kind of shock.”

Trump’s border wall would trample on Indigenous land and culture

"And a child shall lead them"

"And a child shall lead them" Children, thousands of them + the Internet + social media = a global shift, like it or not. Take that cimate deniers!