Dear Rich People, thanks for pressing pause on Donald Trump 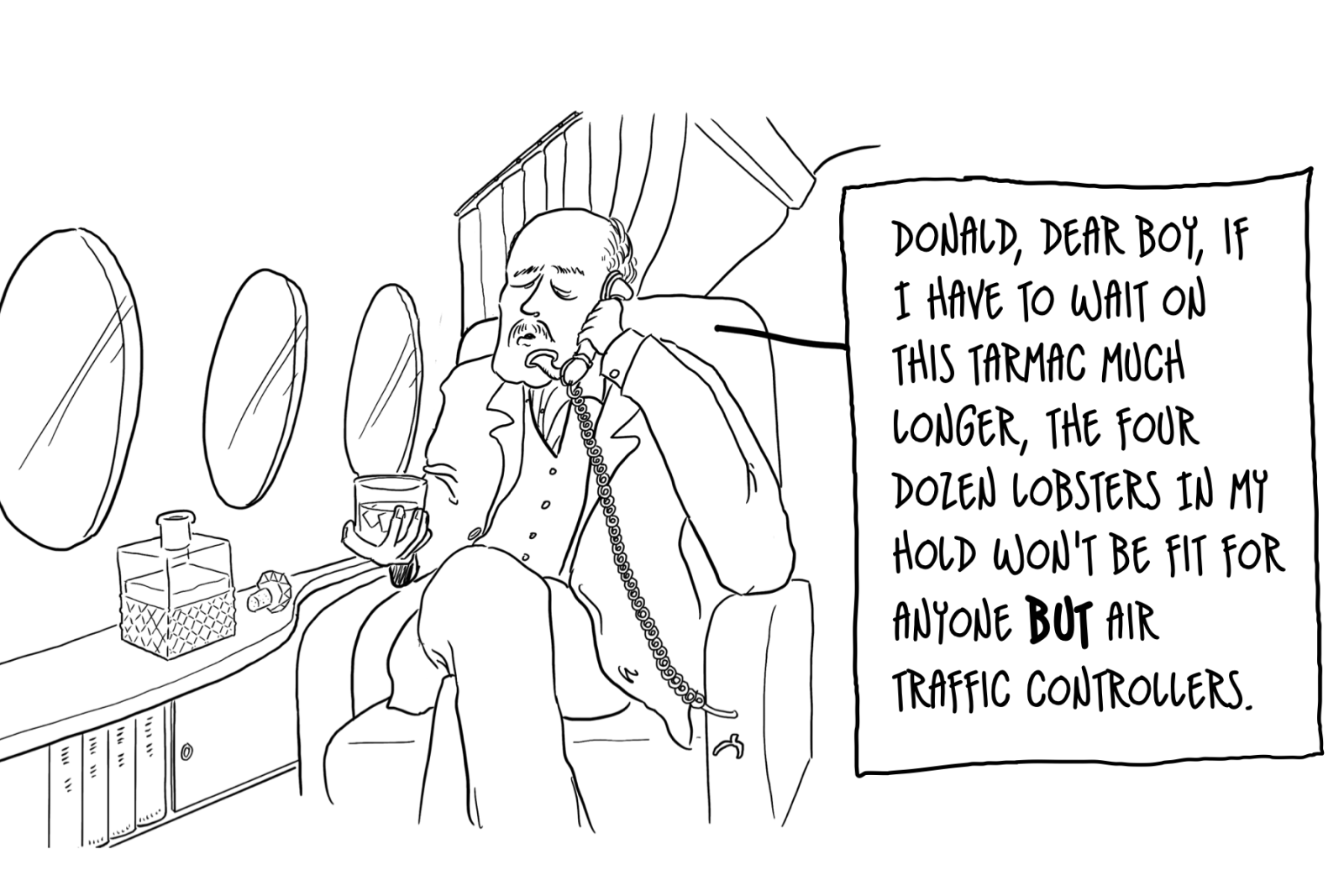 Just a quick note -- sorry it’s not on engraved letterhead -- to thank you for pressing pause on the U.S. government shutdown.

I know you’ve been getting a rough ride lately. Your hand-picked President has wrought havoc with the stock market, so that nice reassuring uphill you’re used to seeing on your portfolio statements has turned into a line that looks more like a rollercoaster at some down-market amusement park. Your pal Kenneth Griffin just beat you to the honor of making America’s all-time most-expensive real estate purchase. And that pinko Alexandria Ocasio-Cortez had the temerity to suggest that the world would be better off without billionaires.

Faced with that kind of onslaught, it would be totally understandable if you just packed up your Louis Vuitton trunk, loaded up your yacht, and sailed off into the sunset. I mean, you didn’t spend all those long hours figuring out how to repackage mortgages as derivatives, just to end up underwater with the rest of us.

That’s why I’m so grateful you decided to rise above, and to deliver us from the latest Trump-manufactured crisis: his record-breaking government shutdown. You might think that was only a problem for America, but believe me, we were feeling the pinch on this side of the border, too. I don’t pay $9 for a half-pint of mid-winter raspberries, only to worry that absentee food inspectors mean my California berries could have a light dusting of e. Coli.

But that risk meant nothing to President Trump -- any more than he cared about the shutdown of the National Park system, or the gutting of school lunches, And I don’t think that any of us were surprised that a guy who treats FBI operations as dispensable wouldn’t think twice about leaving hundreds of thousands of other government workers without a way of paying their mortgages, or even keeping food on the table.

We 99 percenters might have gone on like this for quite a while, patching things together and learning to function without what still passes for a government (at least south of the 49th parallel). It’s not like we had much choice: When your next-door neighbour has a president who’s happy to live on an all-fast-food diet, you can’t count on little things like the shutdown of government catering services to get America back up and running.

That’s where you come in, my darlings, with your eleventh-hour intervention to get this nasty shutdown wrapped up, at least for now. Don’t worry, I’m not accusing you of being soft-hearted: I know you didn’t get where you are by looking out for the little guy.

But don’t be modest, either: I just know that all of you got right on the horn this week, calling your old friend Don, the second this shutdown business started to cut into your air travel. As if flying commercial weren’t bad enough: Now you’re expected to put up with delays, just because a few hundred air traffic controllers aren’t prepared to work with no pay?

I get it: Those flight delays were a drag for us, too. If you think it sucks to wait three hours for a delayed flight from the comfort of the United business lounge, just imagine how tedious it gets when you’re crowded in at the gate next to somebody’s screaming toddler...or slowly steaming in your parka while you wait in an extra-long lineup for the privilege of a border interrogation. But if there’s one thing I’ve learned in two years of visiting Trump’s America, it’s that nobody in this administration cares about annoying, troubling or even endangering regular folks -- even regular folks who voted Republican. That’s why we we’re so grateful when it turns out that the stuff that’s hurting us is also inconveniencing you -- the people who really matter.

Now, you might be too discreet to make a point of how you won us all a reprieve from the shutdown nightmare -- just like you let your politician friends take all the credit for those handy tax cuts, and kept mum about your hard work getting the Environmental Protection Agency to stop bullying those poor little polluters. But don’t worry, we can still recognize your handiwork, and know when you’ve been bending the President’s ear -- if only because it’s now abundantly clear that he isn’t listening to anyone else.

So while I hate to trouble you -- I mean, I can only imagine how much time you have to put into finding the best offshore tax havens -- your intervention this week does suggest a few other ways you might come in handy. For one thing, could you just put this whole border wall business to bed, permanently? Maybe you could let the President know that a wall is going to make it mighty hard for your domestic help to get back from their family visits in time to mow your grounds. He should be pretty understanding of how inconvenient that would be, because he likes to hire undocumented workers, too.

While you’re at it, you could help us out with a few issues on the northern border. (Let’s get real: borders don’t mean a whole lot when you’ve got pockets full of cash, am I right?)

Have you thought about how a tanker accident could affect the beachside of that lovely little pied-a-terre you picked up in B.C.? Please let J.T. know that you would like him to worry a little less about making nice with oil companies and a little more about what a spill would do to your property values. While you’re talking about his energy policies, tell him how awkward it was to have your Silicon Valley buddies jet up for the weekend, only to spend it inhaling smoke from all forest fires….which you just know he could do something about, if he’d stop obsessing over that pipeline.

Or how about weighing in on these interminable trade negotiations? I know steel is not as sexy, metal-wise, as platinum or gold, but it really complicates things like buying a car (or, you know, finding a job) when the U.S. throws a temper tantrum and threatens to tariff a big chunk of our economy. Not my problem, you might think...until one of your golf buddies misses a tee-time because he’s trying to line up an alternate supply chain at his factory. Why not pre-empt that with a whisper in ol’ Donald’s ear?

One more thing -- and it’s a big ask. Can you please, please do something about the U.S. dollar? I know Canadians may seem super chill compared to a bunch of Kentucky teens in MAGA hats, but hey, we get stressed too….and right now, America’s monetary policy and rising interest rates are seriously ruffling our toques. That bloated U.S. dollar is making our cross-border shopping runs downright pricey. I’m sure it’s nice to see your USD $100 million weigh in at CAD $135 million, but believe me when I say it’s in your interest to ensure we regular Canadians can keep buying your American clothes and computers. (Yeah, we know they’re all made in China...but we sure love seeing those U.S. brands on the label!)

I hate to ask for your help with all of this: I mean, I know that between your business and your foundation and your venture capital fund and your elaborate skincare, you’ve got your hands full. I swear, I’d like nothing more than to take the job of saving the world off your already crowded plate, and go back to some retro system like grassroots mobilization or, you know, representative democracy.

But this is the 21st century: The era of the billionaire. Like it or not, the price of having the U.S. government in your pocket -- not to mention a good chunk of the rest of the world -- is that sometimes you’ve got to wade in there and give your political henchmen some gentle correction, just like you do when your gardener neglects the orchids.

I know it’s a high price to pay.

But thanks to all those tax cuts, you’ve got the cash to pay it.

Interesting - and partly true. There is, however, the little matter of the fact that part of the reason Trump has gone to such lengths to woo Russia is that they have been collaborating with him in the washing of millions of ill-gotten rubles by lending it to Trump and his vain-glorious but almost always unsuccessful/uncompleted building projects. The reason Trump panders to Russia is that Wall street's lenders won't deal with him anymore - because he can only be relied on to stiff them - as he stiffs the "little" losers who make the mistake of working for him or bidding on his projects, or, for that matter, voting for him.

I rather doubt Wall St. - or its allies would be inclined to give Trump the ol' boy treatment. To them he is celebrity scum.