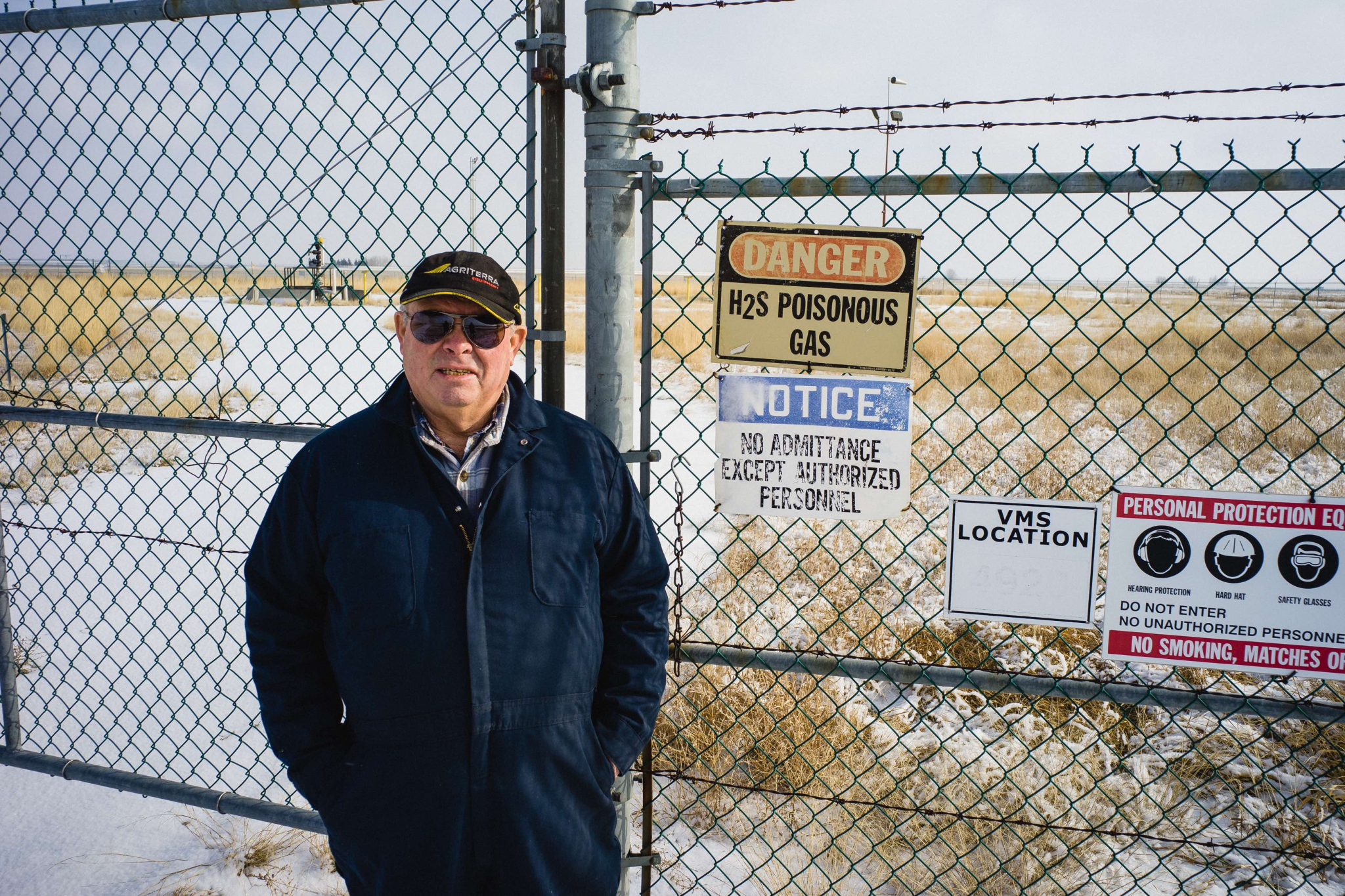 Alberta landowner Gary Smith, shown here on Feb. 24, 2017, stands in front a gas site on his property for which he did not receive an annual lease payment from Lexin Resources of about $10,000 in 2016. Photo by Louie Villanueva
Previous story
Next story

The Alberta Energy Regulator has ninety-nine problems, but a super-priority ain’t one.

In a Jan. 31, 2019 ruling on the Redwater Energy case, the Supreme Court of Canada reaffirmed principles established in June, 1991 by Alberta’s Court of Appeal in the Northern Badger case: regulatory obligations cannot be escaped in bankruptcy, they have a ‘super-priority’ over even secured creditors.

As Supreme Court Chief Justice Robert Wagner wrote in the Redwater decision, “Bankruptcy is not a licence to ignore rules.”

Energy regulators in Alberta in 1991 understood the implications. I interviewed a long-time board member at the energy regulator who was there when Northern Badger was decided.

He also told me industry didn’t want regulators to use this power, so compromises were reached.

In exchange for helping to fund what eventually became the Orphan Well Association, the Alberta government promised industry it would never look back. In effect, if a company could sell its depleted and inactive wells to some sucker, the province promised to never come back to previous owners for cleanup costs.

Just how dedicated Alberta officials were to not using their power to protect the environment was demonstrated in some rather outrageous circumstances in cases before the Environmental Appeals Board regarding Sarg Oils in 1994 and Gammon Resources Ltd. in 1996. The Board hears appeals of some environment-related Alberta government decisions.

Companies clearly not responsible for pollution and never having even profited from wells were held responsible for reclamation even though previous owners were identifiable and still operating.

The message from the province was clear: if you can convince someone to take possession of the mess you profited from, you don’t have to worry about being held responsible for cleanup.

In the quarter century since, oilfield liabilities have been passed along to smaller and smaller producers like hot potatoes as regulators stood by and let companies without the resources to honor their reclamation responsibilities take control of more and more old wells.

But there were genuine efforts by public servants to try solving this problem in the late 1990s.

In 2001, a brilliant regulatory program was introduced that monitored the production curves of every well in Alberta in real time to ensure full security deposits for abandonment, remediation, and reclamation costs would be collected by the regulator for each well while it was profitable.

The transfer of inactive wells to other companies was also prohibited. If you depleted a well, it was yours and you’d no longer be able to transfer the liability to anyone else. Called the Licensee Liability Rating (LLR) program, it would have solved this problem long ago.

But it would also have held industry accountable and they didn’t care for that too much. So increasingly captured Alberta regulators made more compromises.

As production declines, so does the potential for well cleanup

The original LLR program was cancelled at the behest of the oilpatch and replaced in 2002 with a charade designed by industry itself. The transfer of inactive wells was also reauthorized.

And so, the game of liability hot potato has continued in the 17 years since as Alberta drilled another quarter million wells while collecting virtually nothing from industry as security against eventual cleanup.

Alberta’s crude oil and natural gas basin is extremely mature. Outside the oilsands, the vast majority of resources have long since been produced and what remains in increasingly difficult and expensive to extract.

Every year, every well produces less than it did the year before. As production declines, the prospect of any well funding its cleanup diminishes. And regulators have overseen dramatic decline without requiring industry to fund eventual cleanup. All the while, industry has continued drilling more and more wells, adding more and more unfunded liabilities to the equation.

These trends culminated in 2010 in a turning point no one noticed. Dramatic royalty incentives that year encouraging horizontal fracking didn’t just plunge the province into budget deficits that continue to this day, they marked the end of decades of oilpatch profits.

Since 2010, the oil and gas industries in Alberta (outside the oilsands) have spent more fracking than they have generated from the sale of oil and gas – even while oil was $100 a barrel. As a whole, they haven’t turned a profit in a decade. And they will never turn a real profit ever again.

This has created a crisis of potentially more than $100 billion in unfunded oil and gas cleanup liabilities. How is a deeply indebted and unprofitable industry going to come up with the money for cleanup?

One thing is for sure, the industry isn’t just going to lay down and die. Executives aren’t about to give up trying to stuff their pockets with money just because, in the long run, there is more money to be lost than gained.

What if no one ever had to clean anything up? Then there could still be money claimed as profit. And there lies the real motivation behind the Redwater Energy case.

The ball was set in motion immediately after a Supreme Court decision in the AbitibiBowater case in 2012 raised the potential for polluters to escape their regulatory responsibilities in bankruptcy.

Industry immediately came to Alberta regulators with a curious complaint. The Canadian Association of Petroleum Producers (CAPP) and their friends informed the AER that the LLR program industry had designed for itself a decade earlier underestimated liabilities. Industry asked regulators to remedy that.

Regulators’ estimation of cleanup liabilities was ramped up dramatically – the reclamation deposits due from industry climbed from 88 licensees that posted deposits of $13 million to 248 licensees required to post financial security of $297 million.

These increased liability estimates were phased in over the next three years and really turned the screws on small producers that had inherited the depleted wells that big players had drilled and profited from.

Because they were never actually profitable and never had the resources to meet the cleanup obligations they’d inherited from Big Oil, hundreds of small companies were pushed to the brink of collapse by the new requirements to pay tiny fractions of their cleanup bills as deposits to the regulator.

The whole game was on the verge of collapse. And then the NDP was unexpectedly elected and industry panicked. The new government’s promise of a royalty review could bring the whole house of cards crashing down.

Something had to be done.

Seven days after the NDP’s election, Alberta Treasury Branches (ATB) forced Redwater Energy into bankruptcy. And seven days after ATB President Dave Mowat was appointed to chair the NDP’s royalty review panel, regulators were informed ATB intended to thumb its nose at Alberta’s regulatory regime: ATB was going to sell off valuable assets for itself and Redwater’s inactive liabilities were going to be left for someone else to deal with.

The threat of mass bankruptcy and tens of thousands of orphaned wells successfully cowed the NDP, who ended up lowering Alberta’s royalties – already the lowest on earth – even further.

And ATB won in Alberta courts, in rulings that companies could disown anything they liked in bankruptcy; regulators couldn’t make them clean anything up. The implications for polluting industries across Canada are hard to exaggerate.

Thankfully, the Supreme Court set the record straight. Cleanup is a super-priority and can’t be escaped in bankruptcy – exactly as the courts decided 28 years ago.

And yet, 28 years later, Alberta still struggles to get its industry-friendly regulators to use the powers they’ve always had to make polluters pay.

The case at the Supreme Court was won in spite of the Alberta Energy Regulator (AER), which made major mistakes and devoted few resources to this potentially monumental case.

(I know because I was recruited by the AER to assist with affidavits on the potential economic impacts of the Redwater case. But after developing a proposal with the vice president of a major oilfield data service and briefing the AER’s legal team, I was told AER lawyers had no resources for such a study and were simply hoping I already had some analysis I could share with them for free. Such was their commitment to winning the Redwater case.)

When CAPP curtly says it welcomes the Supreme Court’s Redwater decision, we need to pay close attention to what they are actually saying. When CAPP says they agree that bankrupt companies should be held responsible, what they mean is they want the buck to stop there.

Just like back in 1991, they still don’t want the AER to use its power to hold previous owners responsible for the mess they profited from. They want us to pretend the suckers left holding the bag are the only ones to blame.

And just like back in 1991, Alberta regulators are not keen to drop the hammer on their friends in the oilpatch and hold them accountable.

So the struggle to make the polluter pay in Alberta continues. The hour is late and the odds against the world’s richest and most powerful industry are steep, but at least courts have not taken away our most powerful tool: regulators’ super-priority.

There are few signs any one in power appreciates what is at stake, but Albertans have no choice but to continue trying to make polluters pay. The consequences of failing are simply too enormous.

Regan Boychuk is a founder of Reclaim Alberta, a group researching and advocating a plan for the cleanup of inactive wells as a job creation program that could ensure full employment in the energy sector for decades to come.

This article not only

This article not only clarifies the situation, but asks us to stay alert and not go home imagining the game is won. We've left it very late to make polluters pay, and the industry that pollutes has an historical record...outlined in the above article....of shirking environmental policy.

Finding suckers to dump dead wells on being so much more fun I guess. Thing is, it sounds like going forward, we the taxpayers are the most prevalent suckers left. Time to stop whining about wanting lower taxes, and insisting on the very sound principal of Polluter Pay.

What is missing from this

What is missing from this report is just who are these dupes who take ownership, and liability, of these depleted wells? And what is their motivation? I smell another rat in here somewhere.

Don McVee - I'd like to suggest the following: The "new" owners are not dupes at all. They're skilled at extricating multi-nationals from their liabilities and obligations by forming "Junior" oil companies. Complete with glossy brochures, fancy offices and leased BMW's, they convince unsophisticated investors (gamblers) that their upcoming IPO will reap huge rewards by using new technology to bring back a depleted oilfield, or perhaps discover new reserves. The funds raised by the IPO cover all of their expenses plus salaries, until the company falters, fails, and folds its cards, exactly as it was designed to do - all at the expense of those foolish enough to invest in it.
What would be truly interesting is an article researching how many times the same principals are involved in the setup and subsequent failure of junior oil firms that seem to follow this MO.
One wonders if there is any means of tracing an additional payoff from the multi-national to the new owners for taking the liability off of their hands.