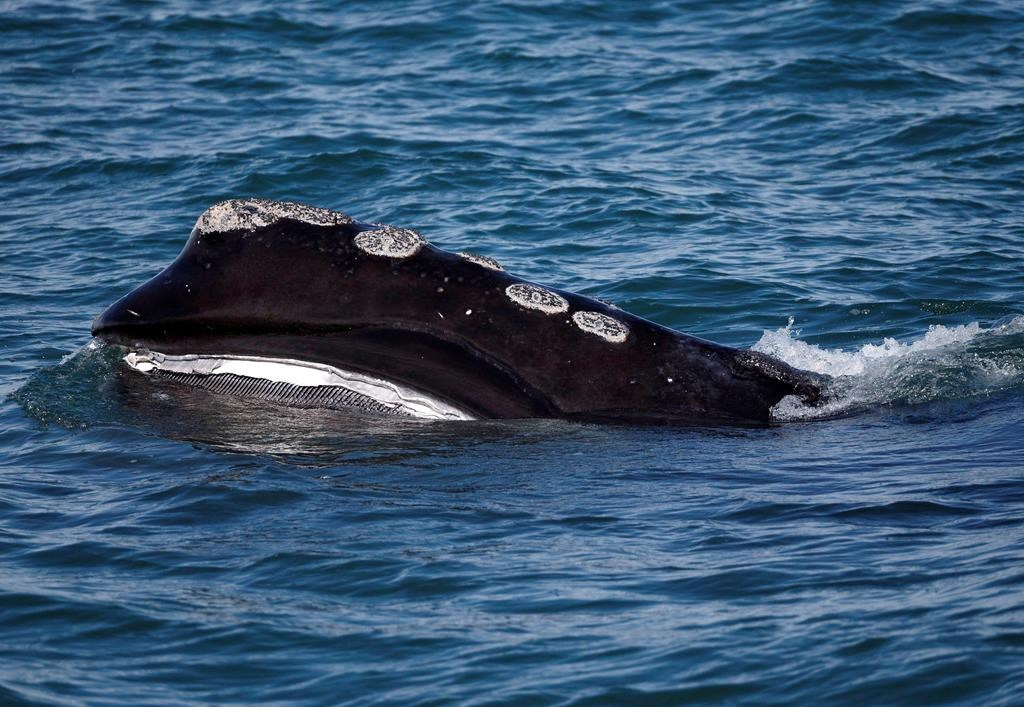 In this Wednesday, March 28, 2018 photo, the baleen is visible on a North Atlantic right whale as it feeds on the surface of Cape Cod bay off the coast of Plymouth, Mass. File photo by The Associated Press/Michael Dwyer
Previous story
Next story

"We met with harvesters, shippers, Indigenous leaders, environmental organizations and other stakeholders to ensure we appropriately reflected on the 2018 experiences, and looked to ensure the integrity of whale protection initiatives while also being as sensitive as possible to important economic interests," said Wilkinson during a news conference.

Beginning April 28 through Nov. 15, the government will reintroduce mandatory speed restrictions for vessels 20 metres or longer when travelling in the western Gulf of St. Lawrence.

Ships will continue to be allowed to travel at safe operational speeds in parts of two shipping lanes north and south of Anticosti Island, when no whales are in the area.

But the area where mandatory speed restrictions apply will be adjusted this year to reflect data on right whale sightings and to minimize the impact on the cruise ship and shipping industries.

Senior government officials said Thursday the southeast area around the Magdalen Islands will be removed from the speed restriction zone, helping reduce the impact on cruise ships by providing a passage around a speed reduction zone "where no North Atlantic right whales have been detected for the last two years."

Ottawa is also reducing the protection area for the season-long closure to the snow crab and lobster fisheries by more than half, and the area is now longer from north to south.

"This decision is based on latest scientific evidence and reflects where 90 per cent of the right whales were observed during the peak fishing season," said Wilkinson.

The government had implemented temporary fisheries closures in 2018 in areas where right whales had been spotted. This year, the rule will not automatically apply to shallower waters of under 20 fathoms — only if a right whale is present in those depths.

Fisheries licence holders must also report all lost gear, and Ottawa said it is aiming to phase-in mandatory gear marking by 2020.

Last year, Some fishermen had argued the so-called dynamic and static closures were heavy-handed and unnecessary at times when the whales didn't appear to be in their fishing zones.

Officials said work is ongoing to explore new innovative fishing technologies, and the Department of Fisheries and Oceans continues to work and communicate with its U.S. counterparts about right whale conservation.

As well, monitoring and reporting efforts will continue, including aerial and drone surveillance and acoustic monitoring.

Kim Elmslie, campaign director for the ocean conservation organization Oceana Canada, said she was concerned by the adjustments to temporary fishery closure and shipping zones, noting they are based on one year of data.

"One year isn't a lot of data, especially when we know there are shifts in the Gulf, we know that there are quite a few of these whales that we tend not to see," said Elmslie.

"There is some movement going on, so I think it's a bit of a risk to narrow down this area based on last year, but I'm sympathetic as well that people need to make a living and need to be out on the water fishing."

Elmslie said she would like to see increased and robust surveillance going forward, as it will inform future measures.

"There were no deaths last year in Canadian waters, but we can't relax and we can't rest and say the crisis has past," she said. "This animal's population is still declining, so that is a concern."

In 2017, 12 North Atlantic right whales were found dead in the Gulf.

Necropsies on seven of the whales found four died from trauma consistent with vessel collisions while two deaths were the result of entanglement in fishing gear.

The U.S. government also recently extended the duration of a protected area off Massachusetts to help protect right whales.

The National Oceanic and Atmospheric Administration has asked mariners to transit the area at 10 knots or less, or to simply travel around the area, until Feb. 11.

Half of world's right whales spotted in Gulf of St. Lawrence in 2018

By The Canadian Press | News, Politics | December 5th 2018
State Of The Animal