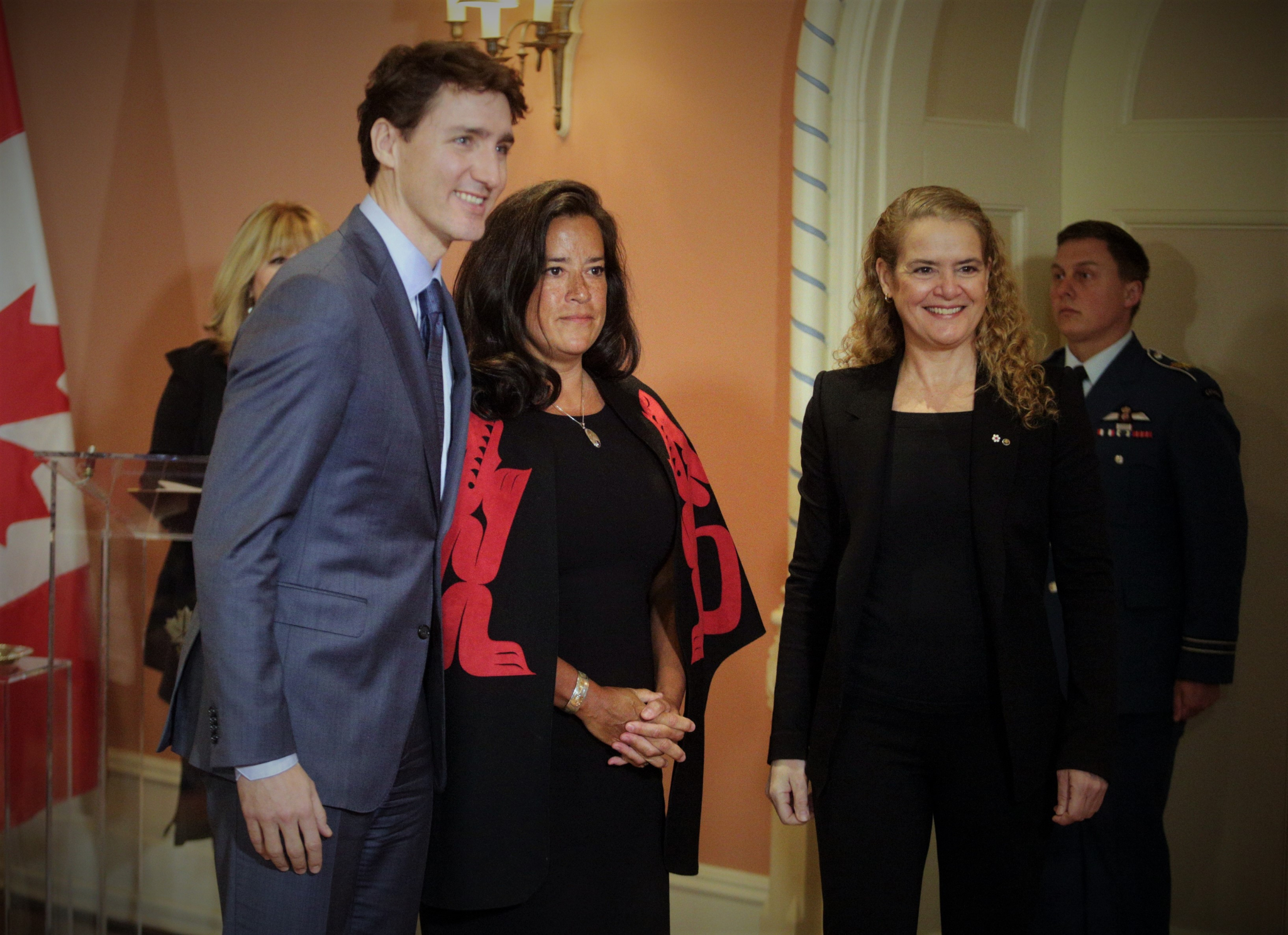 Prime Minister Justin Trudeau is making the case that he and his former justice minister, Jody Wilson-Raybould, were on the same page last fall as federal prosecutors pursued corruption charges against Quebec engineering giant, SNC-Lavalin.

Trudeau made the comments as he was peppered with questions from journalists at an event in Vancouver on Monday about allegations his office tried to interfere with the ongoing legal process, to prevent a conviction that would result in the company being banned from getting federal contracts for a decade.

SNC-Lavalin is a multinational engineering firm that employs thousands of people across Canada in multiple industries, including clean power, mining and the oil and gas sector. It has been in the news in recent years over a series of political corruption scandals in Canada and abroad, including allegations that senior company executives offered $22.5 million in bribes to management of the McGill University Health Centre to obtain a $1.4 billion contract to build the new Montreal superhospital.

The company has been lobbying the government and opposition politicians in recent years to defer prosecution, warning that a ban on public contracts could be costly for the thousands of employees who depend on the company.

Trudeau's remarks came moments after the federal ethics watchdog confirmed he was launching an investigation into the allegations of political interference, following a report by the Globe and Mail that stated Wilson-Raybould "came under heavy pressure" from the prime minister's office to "persuade" Canada's independent public prosecution service to help the Quebec firm avoid a criminal trial on corruption charges.

“We welcome the ethics commissioner investigation. This is an issue that has been much talked about over the past few days, and I think it's extremely important that Canadians can continue to have confidence in our system,” Trudeau said in Vancouver.

“I have met with Minister Wilson-Raybould a couple of times already since arriving in B.C. yesterday,” Trudeau continued. "We spoke about our shared goals for our country and for this government. She confirmed for me a conversation we had this fall where I told her directly that any decisions on matters involving the director of public prosecutions were hers alone."

PM Trudeau says he's met w/ Jody Wilson-Raybould on current B.C. trip; says "she confirmed for me a conversation we had this fall, where I told her directly that any decisions on matters involving the director of public prosecutions were hers alone..." #cdnpoli pic.twitter.com/sAswl6KE7G

“Solicitor client privilege and prosecutorial independence are two of the cornerstones of the Canadian criminal justice system. We must be vigilant to ensure they remain so.”
- @RayAdlington speaking at #CBAAGM pic.twitter.com/R34ewaWYSW

Wilson-Raybould has cited solicitor-client privilege in saying she would not comment on the report about pressure on her over the prosecution of SNC-Lavalin.

Solicitor-client privilege protects communications between a legal adviser and their client. In the justice minister's case, it would be between them and the government, as they are the government's top lawyer.

Conservative Party leader Andrew Scheer has called on the government to waive that privilege. “If (Trudeau) is innocent — if he has nothing to hide — he should waive this immediately," he said, at an event in New Brunswick on Monday.

Scheer was also lobbied by the head of SNC-Lavalin in May 2018 to discuss the criminal charges and the company's request for a "deferred prosecution agreement," the Toronto Star reported on Feb. 10. In New Brunswick, the Opposition leader added that it was essential that Parliament's justice committee be allowed to conduct a full investigation into the matter, in addition to the ethics commissioner.

Over the past year, federal lobbying records also show that the construction giant has lobbied NDP Leader Jagmeet Singh, as well as Canada's top public servant, Michael Wernick, who is the clerk of the Privy Council Office and plays a non-partisan role in government.

Trudeau said the issue is “not a simple one,” and added he had asked his new justice minister, David Lametti, to look into the matter.

"I respect her view that due to privilege, she cannot comment or add on matters recently before the media and I also highlight that we're bound by cabinet confidentiality," Trudeau said. "In our system of government, of course, her presence in cabinet should actually speak for itself."

Earlier Monday, Lametti spoke to the Canadian Bar Association in Ottawa and said politicians have a role to play in the justice system under Canadian law, but that "there is a line that cannot be crossed," that of outright direction on legal matters.

The group’s president Ray Adlington also raised the topic, when introducing Lametti. Adlington refrained from commenting directly on the scandal, but noted that “solicitor-client privilege and prosecutorial independence are two of the cornerstones of the Canadian criminal justice system. We must be vigilant to ensure they remain so.”

The association is a voluntary professional association and lobby group of lawyers, notaries, law teachers and students in Canada.

AG 'does not work in isolation' from cabinet: Lametti

In his speech, Lametti advanced a view of the Canadian legal system that has been recently floated as a kind of defence of the government's actions.

"It is important to remember that while the attorney general sits at a certain distance from his cabinet colleagues, in Canada — unlike in other countries — he does not work in isolation from them,” said Lametti.

"These discussions can improve the quality of decision-making,” he added, but "there is a line that cannot be crossed” — telling an attorney general what decisions to make. At the end of the day, he said, “I will apply my judicial mind to a decision, and not my political mind.”

A deal to avoid a criminal trial may still be on the table. Asked Monday whether it was, Lametti said SNC-Lavalin was “a company that has a number of actions ongoing before the courts, and so it would be inappropriate for me to comment on that.”

The NDP issued a statement Monday calling the whole affair “the latest in a long string of scandals that make it clear whose side Justin Trudeau is on: corporations and the super-rich.”

“Justin Trudeau promised Canadians he would change the way politics worked in Ottawa, but instead his Liberal government continues to prioritize helping insiders and the rich get ahead,” said Angus.

Lametti said in Ottawa the ethics commissioner “has an independent status for these kinds of inquiries” and that he had no other comment on the matter.

The rest of his speech was designed to give listeners an overview of his life and his values. The Montreal-area MP and former McGill University professor was born in the southern Ontario city of Port Colborne near Niagara Falls, as the son of Italian immigrants.

Their values made him believe that there was "no contradiction between being a good person and being a successful person,” he said. Lametti was a Viscount Bennett fellow at the bar in 1991; one of the ways, he said, that he could afford doctoral studies abroad.

He said he was politically motivated by the government of former prime minister Stephen Harper, who he said "undermined and in some cases actively threatened" legal rights in Canada.

Lametti highlighted the government’s successes in passing medical assistance in dying legislation, legalizing cannabis ("the sky did not fall," he quipped) and changing impaired driving laws, as well as appointing 260 judges, a majority of which he said were women.

"It is important to remember

"It is important to remember that while the attorney general sits at a certain distance from his cabinet colleagues, in Canada — unlike in other countries — he does not work in isolation from them,” said Lametti.

This comment in the article above raises the question of gender neutral ideas floated by Trudeau.

the use of "his" and "he" are gender specific and out of place in today's world.

The AG may be male, female or LBGT (may have the letters wrong).

The whole SNC Lavalin issue smells from start to finish.

Mr. Trudeau's constant virtue signalling is pathetic. Has he ever taken responsibility for his many faux pas?