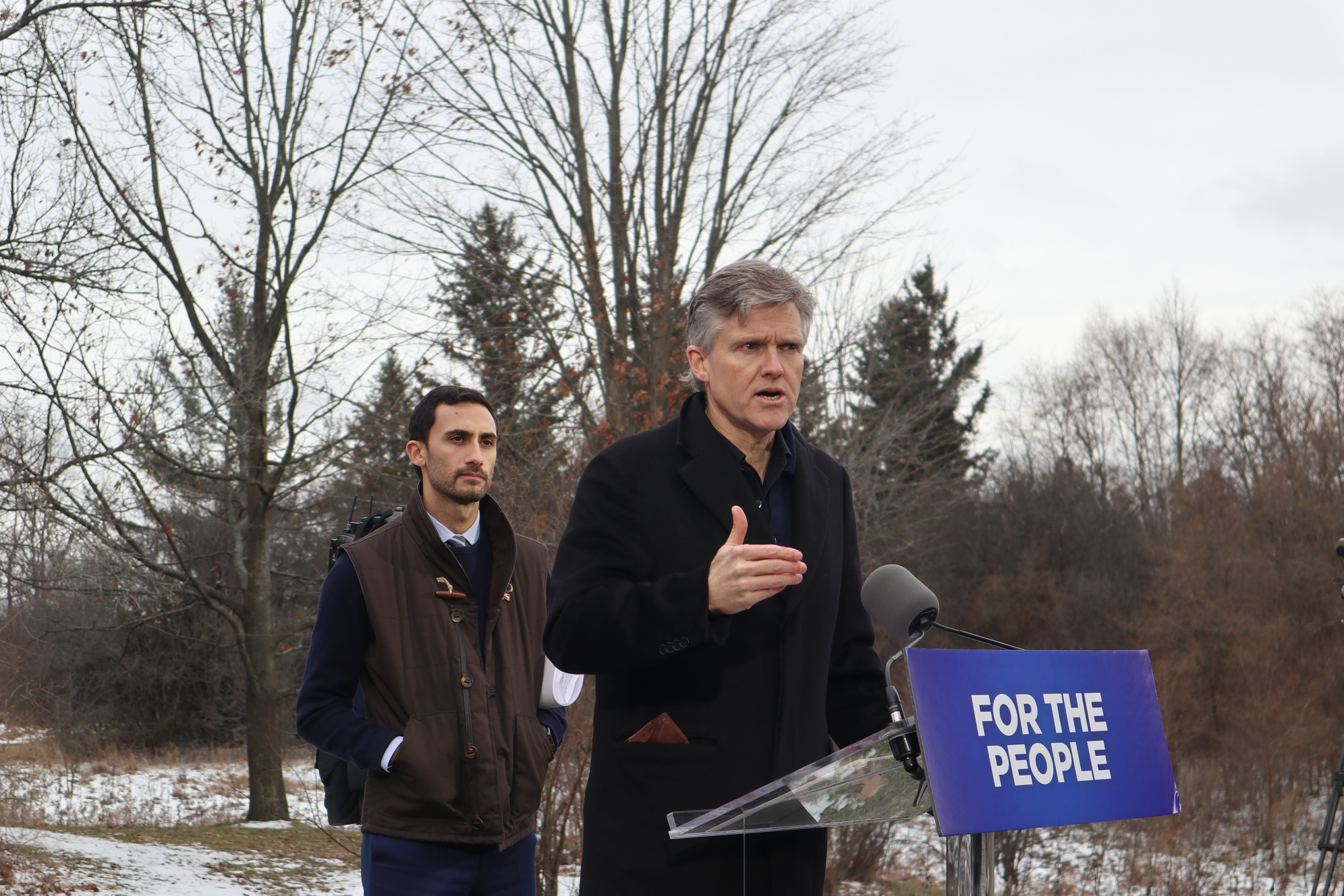 Doug Ford's government says that newly-proposed climate change policies are aiming to simplify rules for businesses so that they can focus on reducing carbon pollution, instead of being swamped in red tape.

On Tuesday, Ontario released a proposal to impose a carbon tax-like emissions standard on industrial facilities that would limit the growth in pollution by setting greenhouse gas emissions to a facility's level of output or production.

We've announced the next stage in our plan to protect Ontario's environment. We'll achieve emissions reduction targets without imposing a carbon tax, which would kill jobs, hurt our economy and make life more expensive for workers, seniors and families. https://t.co/68a4iFuQqu

In an email to National Observer, Gary Wheeler, a spokesperson for Ontario's Ministry of Environment, Conservation and Parks said the proposed system is designed to be "flexible" and "permits facilities to increase production without being penalized for their success."

Critics have decried this proposal as being very similar — if not the same — as the federal carbon tax, which is set to be imposed in the province in April, as well as the former provincial Liberal government's cap and trade system, which Ford scrapped as his first act of policy in office.

Ontario is also fighting the federal government's plans to impose its own price on carbon on provinces that fail to live up to its new climate standards in a $30 million legal challenge.

In his statement, Wheeler clarified the distinctions between the new proposal and the two programs that the Ford government rejected:

"Our proposed approach will focus specifically on industrial emitters, whereas the cap and trade program also imposed charges on distributors of transportation and heating fuels resulting in increased costs for consumers on many everyday items. The cap and trade program created a large, complex market that industry had to navigate, adding a high administrative burden and taking them away from their core business.

Our aim is to reduce greenhouse gas pollution from large industrial emitters while allowing for economic growth, recognizing best performers and minimizing the administrative and regulatory burden.

This system is tough but fair, cost-effective and flexible to the needs and circumstances of our province, unlike a linked cap and trade system, our proposed approach will also guarantee that any emissions reductions are made here in Ontario."

Wheeler added that the government will "ensure strong enforcement of the rules."

Roxie Graystone, an environmental lawyer at Merovitz Potechin LLP in Ottawa, told National Observer that the proposal doesn't make clear whether there will be less regulatory and adminstrative burden on industy, because there are few details about the breadth and scope of the reporting requirements the standard demands — the aspect of any carbon pricing system that incurs the most costs to a business or industry.

"If I am paying an entity a flat rate for the emissions that I am over the standard for, that's fairly simple," Graystone said in an interview. "But, if I have to go out and buy and sell credits on an open market, with transaction costs and all that's inherently involved in those transactions, those will add to administrative costs." The government needs to have "a comprehensive discussion on reporting requirements," including whether there will be a fixed price option or buy-out option in this system and what aspects of production will need to be reported, he added. "In the absence of that, you have a higher relative burden with the compliance of a performance standard than say a tax or something like that where you have a fixed price."

Graystone agreed with critics that Ontario's proposal does the same thing as the federal plan, which is to place a price on emissions. He is unsure, though, if this type of system will meet the national benchmark.

"I think it is in line, at least in part, with what the federal govenrment is trying to get provinces to come on board with and it doesn't thumb its nose or anything at the idea that carbon pricing is the way to go," he said. "This is a carbon pricing mechanism to the extent that it agrees with the federal policy...It's a productive first step."

Graystone noted that while a cap and trade system can be limiting for industry in setting standards that may be difficult to achieve across the board, Ontario's plan eliminates that by "objectively setting everybody's standards tailored to what that facility's or sector's historical emissions have been." This, Graystone, said, will mirror the growth or decline business will experience in that standard being applied to them and possibly reduce the uncertainty the cap and trade system would have caused.

Calgary-based environmental economist Blake Shaffer also said Ontario's plan to impose emission standards at the facility level made it different from the federal carbon tax plan, as well as Alberta's baseline emissions credit system — both of which set standards at a sector level.

In a series of tweets, Shaffer said this makes a difference. "Setting at the sector level drives a shift in production (and emissions) from high to low emitting firms and processes. Setting them at facility level effectively gives more subsidy to dirtier firms," he wrote. "This is akin to (Alberta's) old, less-effective plan."

This matters. A lot. Setting at the sector level drives a shift in production (and emissions) from high to low emitting firms and processes. Setting them at facility level effectively gives more subsidy to dirtier firms. This is akin to AB’s old, less-effective, plan: SGER.

University of Alberta economist Andrew Leach, say it's too early to determine whether Ontario's plan will work.

Leach, who advised the Alberta government on its 2015 climate change plan, said it's good that Ontario is proposing to target pollution from industrial facilities. But he said on his Twitter account on Tuesday that there wasn't enough information to determine whether the Ford government intends to implement its proposed rules in a manner that would reduce greenhouse gases.

The bad: without knowing the total allocation rates, you can't really judge overall stringency. If the government is too generous with allocations, then the average and marginal costs of emissions could drop to zero and make the whole thing worthless.

"It's hard to say whether its going to be better or worse (than the federal carbon tax)," Graystone said. "The devil's in the details, but all the hallmarks are there....It is an emissions intensity-based system that's been used in this country for decade, if not more, and a recognised system for carbon pricing."

The public consultation on Ontario's proposed emissions standard is open until March 29, 2019.

Thanks for this Fatima,

Thanks for this Fatima,

More cynical crap from an incompetent premier and inexperienced government that are clearly in over their heads. This is, plain as day, simply just about trying to weasel out of the federal backstop.

Cancelling cap-and-trade was to be very blunt, a stupid mistake. There are other, less judgemental ten dollar words I could use - cynical, costly, regressive, ill-considered. Reasons not to have done it? I could easily write ten paragraphs. Reasons they did it? One and only one: incompetence.

With transportation and buildings not affected by this "for the people" proposal, and those areas are now the greatest sources of carbon emissions, how is this proposed plan for reduction anywhere near effective in meeting national limits???
Why is this not instantly recognized as evidence-free "science"???

Ah, yes, the devil is indeed

Ah, yes, the devil is indeed in the details. However from what is known now (very little) it is a case of only time wil tell - do we have time to futz about with "bragging rights" provincial "alternatives"? At this point they are un-proven and fractured as they will be, it will be almost impossible to ascertain how effective Canada is in reducing carbon emissions.

Instead of wasting money on $30 million court challenges and $23 Million oil/gas propaganda campaigns and God alone know how much more tax money is going into the subsidizing of oil/gas, or the useless bureacracy surrounding the "regulation" of oil/gas production (big fat failing grade there).... All that money down the cesspool drain when it could be used productively to kick start and scale up the sustainable energy sector/technologies waiting in the wings. No doubt Lewis Carroll could come up with a verse lamenting the ineptitude, the lateness of our paltry government action, even our willful blindness to the threats overshadowing us. Wonderland indeed.

Notice how he did not answer

Notice how he did not answer the federal part of the question? I agree that cap and trade is full of complexities that create red tape. But the carbon tax is no more complicated than what Ford proposes, perhaps less. Ford rejects is because it is easier to fool people about what is really happening when you eliminate the word "tax", which is the catnip of conservatives. At least with the tax I get some money back. With Fords plan the increases will be burried in convulted, difficult to understand and arcane calculations and no money comes back. No wonder this cabinet shuffle is essentially a "the current people couldn't sell the crap we were pedaling. I need better sales people for the square wheels we are selling. I think these people can hide the truth better and get everyone to embrace square wheels."