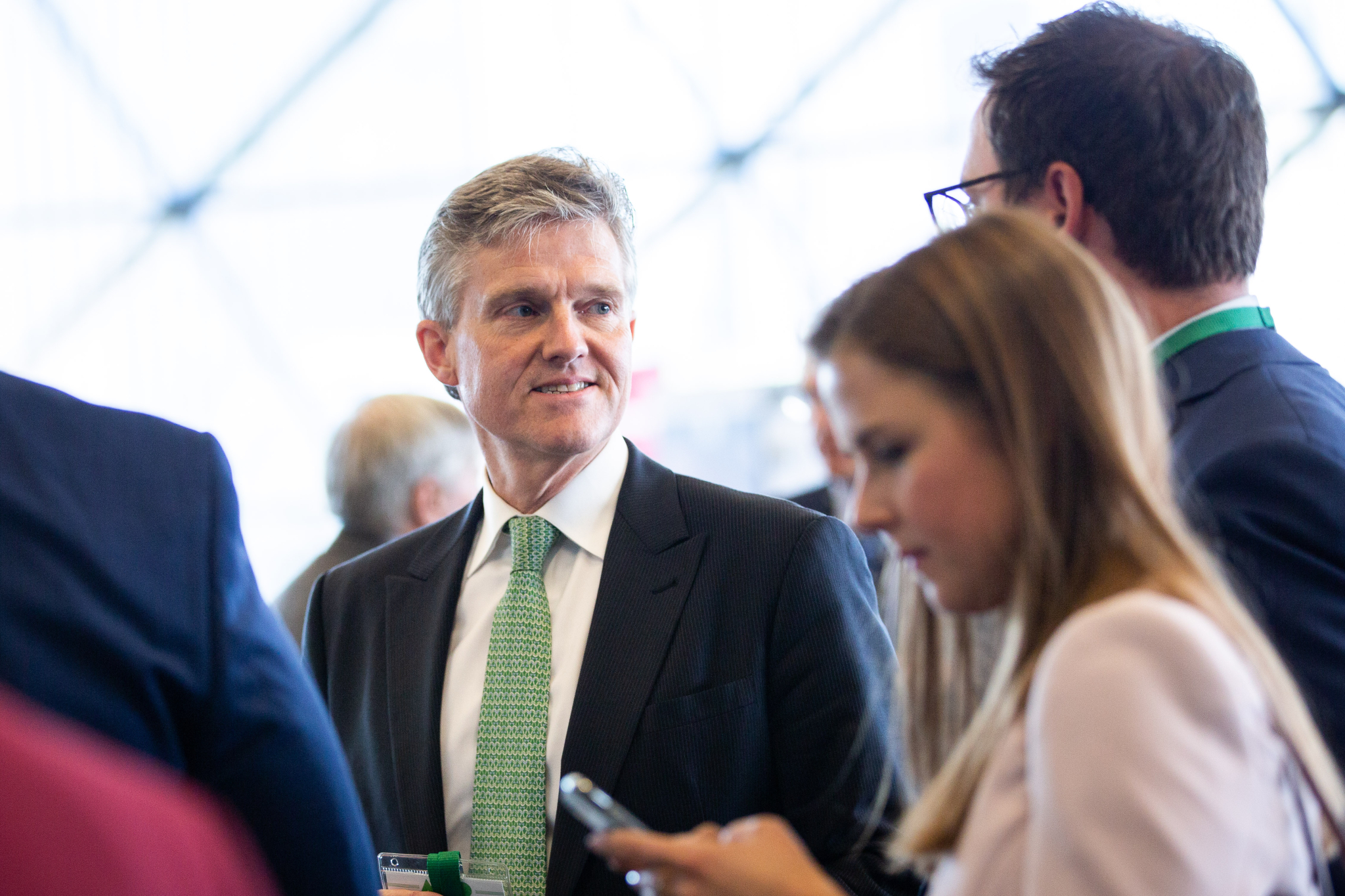 Rod Phillips, Minister of the Environment, Conservation and Parks, seen at the Association of Municipalities of Ontario conference at the Shaw Centre in Ottawa, on August 20th, 2018. Photo by Alex Tétreault
Previous story
Next story

The details of the new standard were posted on the Environmental Registry of Ontario on Tuesday for a 45-day public consultation. Ford's Progressive Conservative government is seeking to introduce new climate change policies after scrapping measures adopted by the previous Liberal government led by former premier Kathleen Wynne.

But it doesn't appear as though the proposal is designed to reduce pollution in Canada's most populous province. In fact, the long-awaited plan says that it is designed to allow pollution to grow by proposing a new industrial performance standard that would limit the growth in pollution, "rather than an absolute cap on emissions for the province." This would be done by setting pollution limits based on the level of output or production of facilities. This approach is commonly referred to as setting an "intensity" target, as opposed to a hard target.

Ontario must also demonstrate that it is meeting new federal standards to tackle climate change if it wants to make the case that it should be exempt from Prime Minister Justin Trudeau's plans to impose a minimum price on carbon pollution, across the country. Trudeau has already pledged to impose the price on carbon in provinces such as Ontario, Saskatchewan and New Brunswick, that don't go far enough in their climate change policies. All three provinces, currently led by right-leaning premiers, are challenging the federal plan in court.

According to the details of the new Ford government proposal, the provincial government is seeking to "provide flexibility for Ontario circumstances as an alternative" to the federal carbon tax, which is set to be imposed in the province in April.

These so-called "flexible compliance mechanisms" would allow industrial facilities to receive compliance units as an incentive for reducing their greenhouse gas emissions. The regulation would apply to all the sectors presently under the federal carbon tax, and may see the addition of institutions, greenhouse operators and the thermal energy supply sector in 2020.

In its proposal, the Ontario government noted that the it was proposing to establish this new standard "on a sector basis where there are multiple facilities making similar products and where there is sufficiently detailed emissions and production data." These sectors would include grey cement, refining and steel sectors.

Under the previous Wynne government's plan, Ontario was part of an international market with Quebec and California that required facilities to meet targets by either reducing emissions or by purchasing permits to pollute that could be earned through real reductions in emissions. This "cap and trade" market would therefore reward companies that reduce emissions, while requiring the higher-polluting companies to pay the price.

The new Ford government proposal is similar. The government says that a facility could meet the new emissions performance standard by either reducing their greenhouse gas emissions or "purchasing and/or using compliance units" to pay for emissions that exceed the standard.

"Any payments we collect under the program could contribute to a greenhouse gas (GHG) fund focused on supporting industry in greenhouse gas emission reductions," the proposal said. The price for these compliance units will start at $20 per tonne in 2019 and increase $10 per year to a maximum of $50 per tonne in 2022 — the same price levels set by the federal government for their carbon pricing program.

It was not immediately clear how the new climate change policies proposed by the @fordnation government were any different from a carbon tax. #onpoli

Similar to the systems in Saskatchewan and Alberta, each industrial facility would be required to demonstrate compliance annually.

The minimum threshold for emissions is proposed at "either 25,000 or 50,000 tonnes of carbon dioxide equivalent per year," the proposal said, and allowing smaller facilities with emissions between 10,000 tonnes per year and the mandatory threshold to opt-in to the program beginning in summer 2019.

"Performance standards are a key part of the government's Made-in-Ontario Environment Plan that puts Ontario on a path to achieve our 30 per cent emissions reduction target, which is aligned with the federal government's target," said Environment Minister Rod Phillips in a statement. "Our proposed approach to reduce emissions from industry would help us achieve our emissions reduction targets without imposing a carbon tax, which would kill jobs, negatively impact the province's economy and make life more expensive for workers, seniors and families."

It was not immediately clear how Phillips' new proposal was any different from a carbon tax.

First look, but Ontario's new industrial emissions regulations look a lot like the CCIR implemented in Alberta or the industrial regs federally. The key is product-based rather than facility-history-based benchmarks. If that stays, it's good policy. More to come.

'Basically the same cap and trade system for large emitters'

The proposal comes a day before pro- and anti-carbon tax groups will present their arguments in Saskatchewan's Court of Appeal.

Green Party Leader and MPP Mike Schreiner said the Ford government's latest proposal was camer "after months of crying wold in public about a carbon tax recession," proving that they were "playing political games with climate action and misleading the people of Ontario," and creating uncertainties for business.

In a statement, Schreiner said the government was essentially proposing "a cap-and-trade model for large industrial polluters. But they forgot to add the cap to lower emissions."

"The big question is why Ford is wasting tax dollars fighting the federal climate plan one day, and proposing a price on pollution for large emitters the next? Could it be the Ford government is just covering its back because it knows it will lose the legal challenge against national climate action?" Schreiner said.

NDP MPP Peter Tabuns agreed. In a statement, Tabuns said that the proposal was "virtually the same carbon tax plan" as the federal government's, and one that "doesn't budge Ontario's emissions targets, which are still among the worst in the world."

"The NDP favours an effective and transparent cap-and-trade market to reduce emissions and put the burden for change onto big polluters rather than everyday people," Tabuns said. "Since most of Ford’s plan replicates the federal carbon tax, it’s completely unclear now which of the two plans will go ahead – leading to even more uncertainty for people, business and investors."

Environmental experts and advocates were quick to note the similarities of the emissions standard program to the federal program Ontario was challenging in court. Environmental economist Dave Sawyer wrote on Twitter that the proposal resembled the Ontario's previous cap and trade system in that both have "product based benchmarks, historical grandfathering and energy benchmarks" and applied to the same sector. The federal and proposed provincial price for carbon was also the same.

Basically the same cap & trade system for large emitters but have added unwinding costs by scrapping cap and trade, increased business uncertainty to reduce GHGS, took off the table low cost reductions from QC & CALI & selling opportunities for ON business in WCI market.

Greenpeace senior strategist Keith Stewart told National Observer the proposed emissions standard had 'basically the same architecture" as the federal program. Without more details, it remains uncertain how stringent this standard would be. While it looks like Ontario is proposing "to preempt the federal system by proposing one that's similar so industry doesn't have to jump between differently rules," the reality is quite different, Stewart said.

"We had a system they ripped it apart without any consultation, its going to cost a lot of money to deal with all the legal ramifications of that and then they basically brought back the same system - or at least its pretty darn close," Stewart said. "This is not providing safety and predictability for industry. Its basically, for ideological reasons, tearing up the carbon pricing system and then saying 'oops, that maybe wasn't such a good idea,' and then reimposing it."

The government's press release additionally noted that Ontario has recently proposed to increase the renewable content in gasoline to 15 per cent as early as 2025, to encourage the greater use of lower carbon fuels and to reduce emissions from transportation in the province.

"Our environment plan put forward responsible, tangible solutions that take into consideration the unique circumstances of our economy and the environment," Phillips said in a statement. "We are already making progress with our emissions reduction proposals to fight climate change and will ensure Ontario continues to protect the environment."

As part of the consultation, the government is also to considering ways "to recycle any funding that is collected to finance further greenhouse gas reductions."The standard is intended to take charge in summer 2019.

couple of typos in paragraph:

couple of typos in paragraph: was camer "after months of crying wold in public about a carbon tax recession," ?!

Isn't that a dirty trick! LOL

Isn't that a dirty trick! LOL Get elected on no carbon tax, then implement one and expect the opposition to keep quite so it can actually go through, but by keeping quiet they give him cred. Bwa-ha-ha

Is this the best Ford can do

Is this the best Ford can do after being screamed at for his dastardly actions? Of course it's no better than no action at all!!
I encourage readers to google "courage coalition" and sign "A Green New Deal for the North"! It covers not only climate justice action, but includes everything needed for a truly just society!
Thanks.