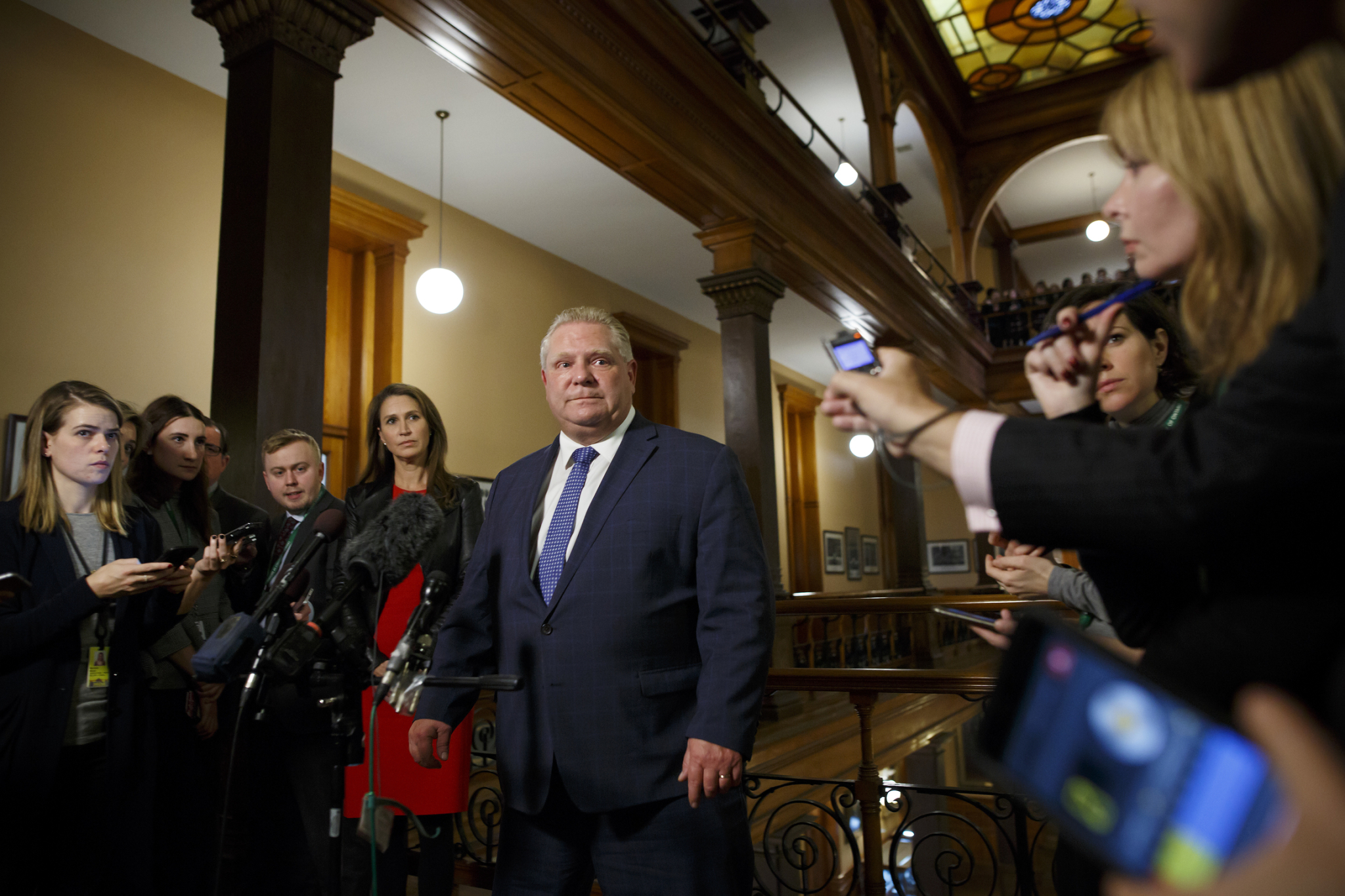 Doug Ford is dismantling a service meant to help citizens and municipalities stand up to developers — a move critics are calling a blow to local democracy.

The Local Planning Appeal Support Centre (LPASC) was set up in April 2018 under the previous Liberal government to help everyday Ontarians navigate and understand the complex planning appeals process to fight development projects that were inappropriate, unreasonable, misplaced or designed without considering municipal and provincial planning and growth guidelines.

It was created as part of a series of reforms to the Ontario Municipal Board, which, critics said, was too slow and favoured municipalities and developers, as they can afford the cost of lawyers and experts in the development appeal process. The OMB was also criticized for not deferring to local municipalities.

The LPASC received word this week that it must close its doors by June 30. It told clients and stakeholders in a statement Thursday.

"It is disappointing," Mary Lee, executive director of the LPASC, said. "This new process was about giving more accountability to municipalities and to give everybody a voice in land-use planning decision....There was a lot of work to do in the centre and it was of real value to the citizens of Ontario."

In a statement to National Observer, Brian Gray, a spokesperson for Ontario Attorney General Caroline Mulroney, said they had "to make difficult decisions about programs across the province," including winding down the Local Planning Appeal Support Centre by summer.

"Recent reforms to the land use planning and appeal system give greater weight to the decisions of local communities, while balancing development and growth in Ontario," Gray wrote. "This will ensure people and neighbourhood associations have a stronger voice in development decisions."

But critics say the decision is a step backwards and shifts power back to developers.

In a statement, Ontario NDP MPP Jeff Burch said the Ford government's decision was yet another in a long list of decisions that favoured the premier's friends. Burch said that by shutting the centre down, the Conservatives were "making things even worse for folks by stacking the deck against them, giving easier wins to powerful developers."

"This is only going to make it harder for everyday Ontarians to protect their quality of life when developers try to take advantage of people to pad their already-deep pockets," he added. "Everyday Ontarians deserve to have a say in how their communities grow."

To many it wasn't a surprise. During his election campaign, Ford promised to find a way to increase land supply, despite the fact that the provincial growth plan had allocated land for development. He has twice tried to open the province's protected greenbelt for development, and has backtracked in the face of public outrage.

Toronto City Councilor Mike Layton said shutting down the LPASC is another "bold-faced favouring of developers."

In an interview, Layton said, the government "has cut the legs from under the communities that try to appeal developments and disempowered them."

"I'm really afraid of what this means about local decision-making process," he added.

Breaking: Ontario government moves to cut people out of development and planning decisions by shutting completely the Local Planning appeal support centre. This hands power directly to developers and a sign of things to come. https://t.co/9DzaT5w6ve

Oakville Mayor Rob Burton, an early proponent of the LPASC, said he was "pleased" by the system overhaul that brought it about. "It causes me great concern knowing that Ontario’s 'government for the people' is shutting down the planning appeals assistance office for the people," he said in a statement.

Hard to believe! Building strong, healthy and complete communities is predicated on good Official Planning. And that planning only works when citizens can meaningfully engage and receive support for that engagement. This is going backwards folk. Code Red for municipal planning. https://t.co/faQbW8FYDf

"I don’t think it takes a rocket scientist to figure out we have a pro-development government and anything to slow down and impede the process of development is not what they like," said Mitchell Kosny, interim director of Ryerson University's School of Urban and Regional Planning.

"They don’t want anybody to get in the way of what they want, and they want more development."

'They closed it because they didn't believe in it'

Prior to the LPASC's existence, there were no resources available to members of the public interested in participating in the land use planning system in the province, and in particular in the appeals system. Still, the Ontario planning process is a field where civic engagement and the number of unrepresented individuals is high.

Many experts believed the LPASC represented a resource that was missing under the previous planning systems, and was unique to Ontario and perhaps Canada.

The body came about after extensive consultation with the province, including several town halls and an online consultation, both led by former Liberal Attorney General Yasir Naqvi.

The LPASC had a $1.5 million budget to provide legal and planning assistance to citizens groups to participate in matters before the tribunal. Before its creation, Ontarians had to hire their own experts and lawyers to testify on their behalf.

Mark Cripps, a former Liberal official in the Ministry of Municipal Affairs and Housing, explained that the LPASC was modeled on the Human Rights Legal Support Centre to provide general information about land use planning, guidance to citizens on the tribunal appeal and heating process, and providing legal planning and, if required, free representation.

"It was created to level the playing field," Cripps told National Observer in an interview. During the consultations, Cripps said, he met one woman who put up $25,000 of her own money to fight an appeal against a development in downtown Toronto, and heard of countless bake sales run by communities to do the same.

The LPASC was created to level the playing field, but also to serve as a front line for mediated settlements and/or honest advice that launching an appeal would not be successful.

While municipalities welcomed the new system, developers didn't like the LPASC, and construction unions lobbied against it, Cripps said. "They did not like these changes because they want to see density and they did not want municipalities to have a say in where they think density should go," he said.

The decision to cancel it doesn't surprise him. Past reports show that groups like Ontario Proud, a right-wing Facebook group that actively supported the Ontario Conservatives in the 2018 election, received large donations from developers. One came through Ontario Proud, who received $100,000 from Mattamy Homes, a Toronto-based residential developer.

In light of this, Cripps expects to see "continual threats against environment protections and plans we have in place to protect land under the guise of building more supply and building more homes."

"You have a new government that has a leadership that developers support and like. This comes with their mantra," Kosny said. "I’m not sure they really know where they’re going with this...it doesn’t fit with an overall direction. It fits with their particular set of values."

"They closed it because they didn't believe in it."

Mary Lee, executive director of LPASC, said there was no indication that the centre would be cut when two members of the Ontario Minister of Municipal Affairs and Housing visited them on Jan.16, 2019.

"They were interested in our services," Lee said, adding that they met with their small team of 10 members for information. "We had started to learn and garner interest from the community."

Gray, the Attorney General's spokesperson, said there has been "a low demand" for LPASC services, with about three inquiries a day.

"Ontario is working for the people to make government services run more effectively and efficiently and ensure spending is delivering the best value for the people of Ontario," Gray added.

Lee believes the government's assessment of the centre is premature. In the 10 months it has been operating, the LPASC has had 570 cases and serves over 168 communtiies. Of these 570 cases, 225 cases remain active. In total, 40 per cent of the appeal cases underway in Ontario have involved the centre.

"LPASC cases cover a wide range of complexity and support needed, depending on what stage a case is at in the planning approval or appeal process; for example one case can be ongoing for months," she told National Observer. "Our volume needs to be considered in relation to what the volume of cases might be before a planning lawyer.

Layton agreed. "Its months old," he said, calling the decision to cancel it "just ridiculous."

"(The government should) give this a little bit of time and allow the system to be used," he said. "They are jumping way ahead."

"I think the jury was still out on whether it was effective or not, but it would have been nice to have that debate," he said. Ten months doesn't provide any baseline of data for a reevaluation, he added.

"I don’t know what (this decision) is based on. I’m not sure they're making any decisions that are evidence-based," he said. The LPASC had potential, it was lacking resources to do what it was supposed to do, but it didn't need to be shut down.

"At least make the decision based on some kind of information," he said. "For heaven’s sake, make it with something in front of you other than a whim."

Ultimately, Ontario citizens lose in this, Kosney said. "Who suffers? My neighbor, your neighbor. Someone who doesn’t know the planning system, who cant afford lawyers, who doesn’t speak English," he said. "It hurts the disenfranchised even more because they don’t even know how to participate.

Holy Cow! And this

Holy Cow! And this government had the gall to call itself the "peoples government" - too bad they didn't let us know they meant all THOSE people - the developement industry/lobbyists... The people who define "density" as bulldozing all the topsoil off productive argicultural lands, stock piling it to sell, and creating a wasteland of cheek-by-jowl identical townhouses (tenement slums in the making) stuck out in the middle of nowhere for people desperate for a roof over their heads. These "internal refugees" are now entombed in deserts with no access to public transit, absent schools, places of worship or community facilities including parks or trees - which may take years to appear. This is planning? Only in the dreams of the fly-by-night developers, and the election coffers of the PC government.

Another failure of Kathleen

Another failure of Kathleen Wynne's government.the OMB should have either been eliminated entirely or its powers drastically curtailed, especially in a city of five million people. Whatever Fird does will have been made easier by the timid action of the Kathleen Wynne government.