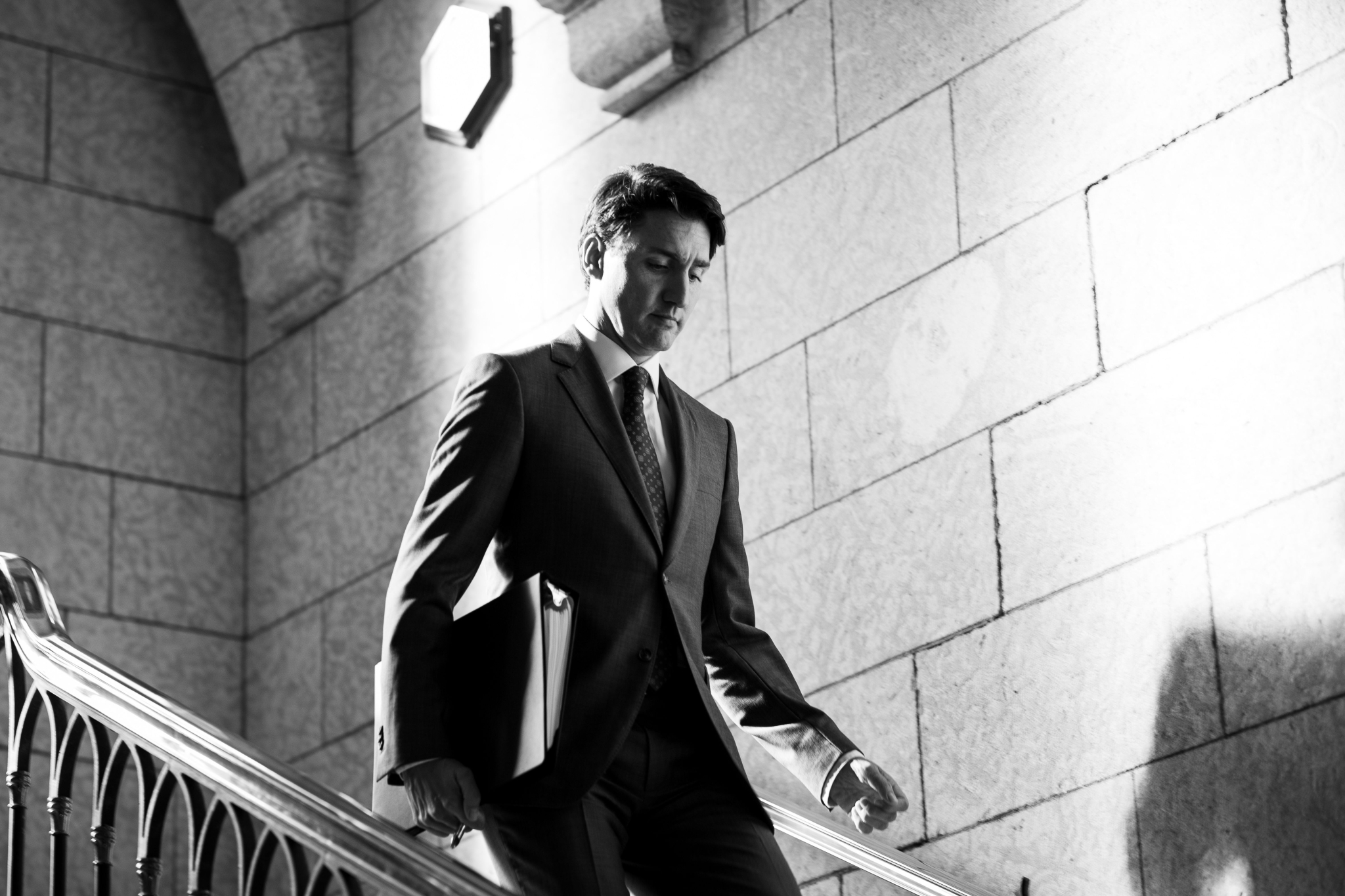 Prime Minister Justin Trudeau goes down the stairs outside the House of Commons in Ottawa on Oct. 24, 2018. File photo by Alex Tétreault
Previous story
Next story

Prime Minister Justin Trudeau picked his old school in Montreal as the setting as he began a counter-attack Wednesday evening in the SNC Lavalin affair — a setting that underlined some of the interprovincial tensions in the controversy, with many Quebeckers believing that government was right to use drastic measures to protect thousands of jobs in the province.

“I think it’s important to keep the jobs," said one Liberal supporter, Maryse Fontaine, at the event at the school, Collège Jean-de-Brébeuf, in the predominantly French-speaking Outremont neighbourhood. "I think that’s the most important thing to do, is to keep the jobs for the families and the kids.”

The private high school and college is also the alma mater of Pierre Trudeau.

And it was busy on Wednesday. As the prime minister arrived, students were walking through its campus to and from extra-curricular activities, while people carried hockey gear across the parking lot on their way to the school's arena.

The event came only hours after the public testimony by former justice minister and attorney Jody Wilson-Raybould's that Trudeau, his advisers and other top public officials had interfered in her judicial independence by pressuring her to drop a prosecution against SNC Lavalin. The Quebec engineering giant, which employs about 9,000 people across the country, has its headquarters in Montreal.

Trudeau delivered his remarks and took questions from reporters with a group of about 30 Liberal supporters standing behind him, celebrating the party's victory in a Feb. 25 byelection in the riding that was previously held by former NDP Leader Thomas Mulcair.

As the prime minister entered the room, he was quick to mention his own connection to the school, also saying that his daughter Ella-Grace was accompanying him, though she wasn't at the media event.

But the larger focus was on the response to Wilson-Raybould's testimony.

Trudeau said he "completely disagreed" with his former cabinet colleague's characterization of events, insisting that he and other members of his staff acted appropriately to protect Canadian jobs, pensions and the economy.

“As we govern and make decisions for the good of all Canadians, we will always act within the bounds of what is appropriate,” Trudeau said.

But he also said that he hadn't heard all of what Wilson-Raybould told the parliamentary committee and would decide whether she would remain in the Liberal caucus after reviewing it in detail.

“Obviously, I haven’t had the chance to listen to all of her testimony and I will do that before making a decision,” Trudeau said.

The Liberal party said that the event was meant to thank local Liberal supporters who had volunteered on the campaign during a heavily contested byelection for the Outremont seat. The riding includes the Montreal borough of Outremont as well as parts of the multicultural Côte-des-Neiges neighbourhood and the Université de Montréal campus.

Liberal Rachel Bendayan won the election and stood next to Trudeau during the news conference, without making any comments.

The Liberal supporters on hand lined up in rows behind the microphone, smiling and chatting, while Trudeau entered the room.

Fontaine, one of the volunteers who was thanked at the event, said that campaigning for the winter byelection had been extremely difficult, in terrible weather. But she added that the group was elated when they won, despite feeling caught in a moment between a high and a low.

“It’s huge for us,” she said. "Now we have this wonderful news," she added, gesturing wryly at the room where Trudeau spoke, referring to the SNC Lavalin controversy.

"We’re fighting, and we’re fighting and fighting because we believe this is a good party," said Fontaine, who spoke to National Observer in a hallway after the event had concluded. "And I think, [despite any] bad things, we did a good job for Rachel, and I’m really proud of it, and it’s the reason why we are here tonight, to support the Liberal Party.”

In any case, she said she believes that Quebeckers do tend to see the situation differently, knowing that SNC is a local economic giant, responsible for thousands of jobs.

“There’s always something to talk about, and today, this is the subject," she said. "Tomorrow there’s going to be another one. I’m sure he’ll deal with this properly and he’ll do something good with this whole war. He’ll do something extraordinary, because he’s our prime minister.”

After a handful of questions from reporters, Trudeau abruptly ended the event and he, along with all the Liberal supporters, were ushered quickly out of the room.

Mr. Trudeau states this is

Mr. Trudeau states this is now in the capable hands of the Ethics Commissioner. Trudeau has had previous ethics violations. What was his punishment? Exactly. At the very least Liberals should hold a leadership review. Canadians deserve better.

It is too late to argue about

It is too late to argue about saving jobs. The testimony so far indicates that there was considerable pressure placed on the former AG to interfere with a decision to prosecute (all ready announced) by the Department of Justice. The question that needs to be answered is ... were the actions taken by various members of government, after the decision was made by the former AG, Political interference? Which is a very serious charge. Mr. Trudeau doesn't seem to recognize that the horse is out of the barn. Quebec doesn't matter anymore. The people of Canada need to see that our laws are protected equally for every citizen and he seems unwilling to reassure us by allowing all info and testimony out in the open. He is dividing the country not uniting the country.

First, let us acknowledge that rulers, institutions, governments of all kinds, always have, and always will try to bend, twist and manipulate events, thinking, and laws in their natural self-preservation efforts. It is, unfortunately, embedded into the survival instinct.

A certain amount of this is largely tolerated by the ordinary, "unelected" citizenry. Until, that is, some particular favoured ox is gored. Then we are apt to see the panic driven flailing about, the threats, the manipulations the sub-rosa incursions "over the line".

By this time, when the ruler, government, institution runs into the immovable object, the frantic backpedalling, the lame justifications, the obfuscations are deployed. And the classic "cover-up" proves the truth of the misleading manipulations.

It is too early to say definitively if the strict letter of the law was crossed. Especially when the applicable laws, are inadequate? ineptly written? the underlying principles imperfectly understood, or purposely misconstrued.

The root of this and similar problems lies in the uncontrolled flouting of restraints, the opportunistic and malevolent manipulations of the psychopothic corporations that claim to be too big to fail. The fact that they rely on that unsupported claim, is a strong signal of their underlying weakness and bent toward criminality.

SNC is spreading fear to sway the judicial processes in the case of criminal bribery/corruption laid against them Ironically, they have already admitted their culpability - now all they are trying to achieve is the elimination of meaningful penalties for their malfeasance.

The people of Quebec, fearing the loss of this employment behemoth are panic stricken. They forget the fundamentals. When a giant crashes, it leaves behind a vacuum that other entities are eager to fill. SNC, and their ilk, in effect suppress competition, suppress innovation, suppress the growth and diversification of talent, enterprise, and the public good. Like the strangling effect of parasitic vines, these transnational corporations exist for one purpose only, to enrich themselves at the expense of a healthy, thriving social and economically sound community.

Well said. Have you

Well said. Have you considered running for office?