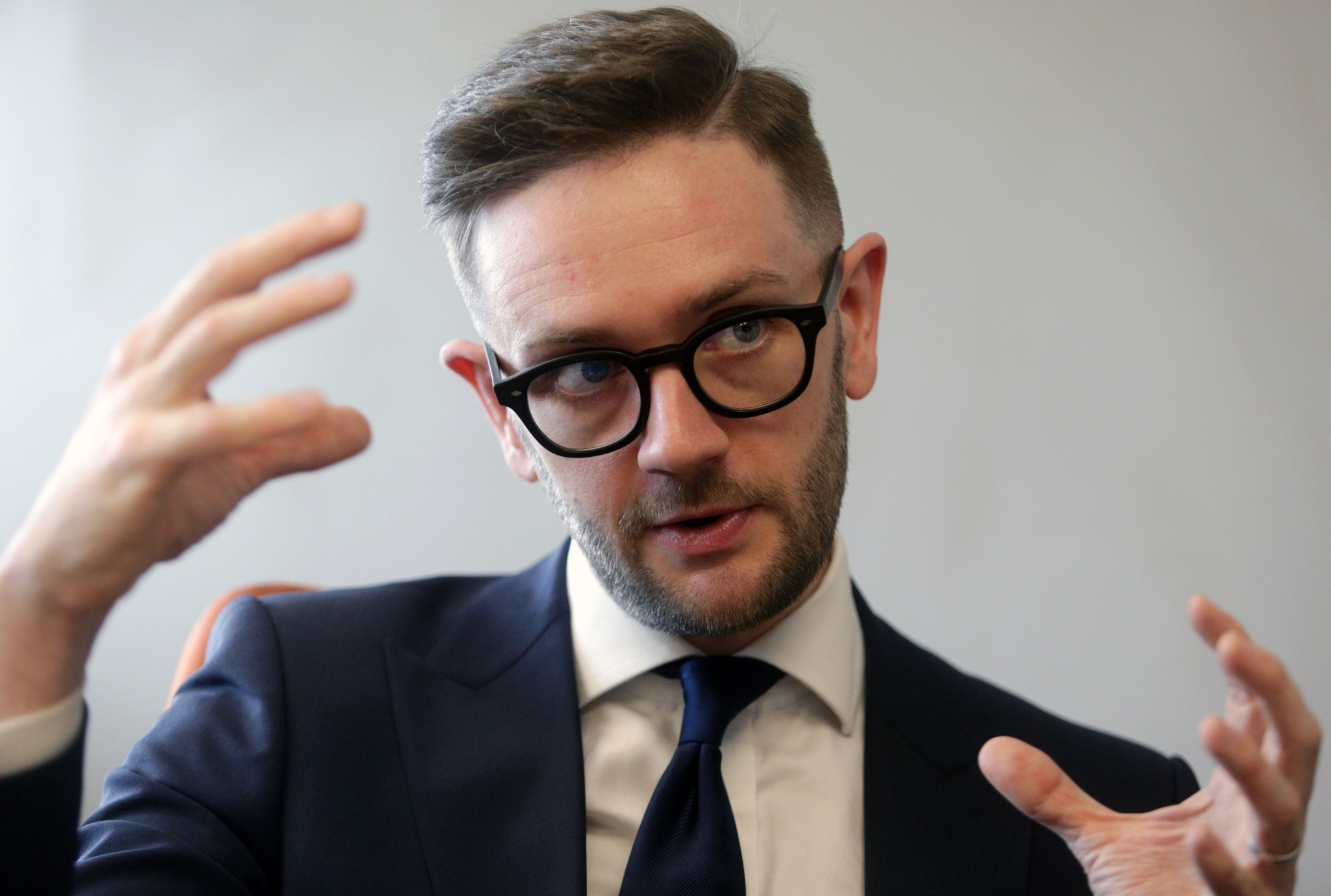 Chris Stark, the chief executive of the U.K. Committee on Climate Change, speaks at the British High Commission on Feb. 25, 2019. Photo by Andrew Meade
Previous story
Next story

Fossil fuel reserves must stay in the ground and be priced differently in the markets, if the world is to meet the challenge of the Paris climate agreement, says the head of Britain’s climate watchdog.

Chris Stark, the chief executive of the Committee on Climate Change, which advises the government of the United Kingdom on reducing emissions and adapting to global warming, told National Observer that while fossil fuels will still have to be used for decades, “that has to be accompanied by a strategy to take us off them in the future.”

“Put bluntly, if we are to meet the emissions targets that are implied by the Paris agreement, then we know already that we have too many fossil fuel reserves out there,” Stark said Monday in an interview at the British High Commission in Ottawa.

Stark became the chief executive of the UK climate committee on April 16, 2018 after previously being the director of energy and climate change for the Scottish government. He explained that developing all of the reserves of oil, gas and coal would make it impossible to meet the goals of the Paris climate deal, reached in 2015.

If we don't meet those targets, he said it indicates a problem since there hasn't been sufficient investments that would allow us to adapt to a changing climate. He also said that the current market needs to assess all the risks and impacts of fossil fuels and incorporate these factors into the price that we pay for these energy sources.

“The idea of disclosing those risks more explicitly to the market is going to be a really important driver of getting the investment patterns right in the future,” he said.

Stark was in town to meet with Canadian MPs and government officials, as well as civil society members, to offer up expertise.

An independent office to give advice and hold the government accountable for its climate change commitments. We would do well to follow the UK's lead through @theCCCuk. https://t.co/IlrIqypamL

His comments add to concerns raised by the International Institute for Sustainable Development that a large portion of Canadians’ retirement savings and pensions rely on fossil fuel reserves and are therefore exposed to deep financial risk, if the aspirational goals of the Paris Agreement were to be abruptly implemented into Canadian financial markets, in the absence of an orderly plan.

“Politicians have to be grown-up about it too," @ChiefExecCCC told @OttawaCarl . "Being grown up is about taking big decisions at the right moment, being supported of course by the economics and the evidence.”

A recent Supreme Court of Canada ruling that prioritized environmental cleanups over repaying loans is already leading to Canada’s “big five” banks and dozens of other financial institutions taking the decision into account when calculating credit availability to fossil fuel firms. Credit rating agency Moody's Investors Service said the ruling could mean banks will be less willing to lend to oil and gas producers.

Stark said it was “possible” it would get to the point where his committee would recommend that a large portion of Canadian oilsands assets can’t be burned, as British researchers concluded in a 2015 academic paper in the journal Nature.

“I don’t speak with any authority about the Canadian position — but what we really need are big market mechanisms that encourage people to do the right things, for markets to do the right things, and for the big corporate interests then to follow that,” he said. “That will be a mixture of things, including potentially saying some tough things to the oil and gas sector globally.”

The markets are already speaking for themselves, he added. Clean energy technology and renewable energy are becoming less expensive by the day, such that he predicted it would soon be cheaper to electrify road transport in the U.K. than to do nothing. “The interests of government should be in reducing the costs of the good things, it seems to be, and then the market will deliver."

Stark's committee, staffed with a 30-person secretariat, was created 10 years ago as a statutory body under the U.K’s Climate Change Act 2008. It provides advice, conducts research, monitors progress on targets and engages with organizations and people to share evidence.

The “tripartite” arrangement of the committee, with Parliament as “enforcer of action” and government as the administrator of emissions reduction plans, “seems to keep everyone in the right place," said Stark.

He said he was a "very, very strong advocate for a similar institution" outside of the U.K. "I think it is one of the most important bits of the U.K.’s framework for climate change. It’s the bit that keeps everything working.”

Canada will soon award a multimillion dollar grant to a non-profit organization that will take on a watchdog role similar to Stark's committee. “We’ve been hearing from the (Canadian federal) government about their desire to see some sort of body in that independent watchdog role," said Stark.

“I know that at the moment, there’s been consultations on what that body might be, who would be in it, and what it would do."

The Trudeau government launched a “competitive process” this fall for a new climate institute and a call for proposals ran from Oct. 30, 2018 to Jan. 14, 2019.

After meeting with Stark, a pair of Liberal MPs, Nathaniel Erskine-Smith and Arif Virani, praised the role of the British committee, noting that it provides independent oversight and holds the government accountable for its climate change commitments.

"Terrific to hear from Chris Stark...about the robust mechanism used in Britain to set climate change targets and report back to Parliament directly on government's achievements to date," added Virani.

Canada previously had an advisory body called the National Round Table on the Environment and the Economy, or NRTEE. The government of former prime minister Stephen Harper ended funding for that organization and it shuttered in 2013.

The federal environment commissioner, who works in the auditor general's office, also has an oversight role that is fulfilled by reviewing Canadian government programs and measuring results.

An example of the British committee’s work is a recent report showing how there has been little progress in reducing carbon pollution from U.K homes.

While the country’s climate change act demands “near-zero” emissions from homes by 2050, “efforts to reduce emissions have stalled,” the committee said, and most homes are still using fossil fuel heating.

It was a “classic example,” he said, of how science has clearly shown the need for action, and many policy paths can be designed to support those goals — but governments have been unwilling to act because of politics.

Another example he gave was the U.K. government’s desire to expand Heathrow Airport, already a major international air travel hub. Such an expansion would run counter to reducing transport sector emissions.

Rather than taking a policy position, he said, it was his job to point out the choice inherent in such a decision — that emissions would have to be cut more severely elsewhere.

“As government, you cannot escape that choice,” he said. “We are here to point out those choices.”

The British House of Commons has voted in support of a Heathrow expansion, but the project remains under review.

‘We can’t push the difficult decisions down the line’

Asked what he thought was the biggest threat to successful climate action, Stark said that domestic politics could lead to a lack of enthusiasm to propose and implement effective solutions.

“The biggest risk of all of this is that politicians are faint of heart and don’t do the right thing, so we (fail to) get to the right outcome at the end of it,” he said.

When the climate change act in the U.K. was put into place in 2008, he said, there was “near consensus” in that country’s Parliament for that. He said it was the culmination of political momentum that stretched back several years prior.

Ten years later, he said there was still political consensus in the U.K. to deal with climate change. “But whether that amounts to an enthusiasm to do it, in the way that there was 10 years ago, is a much more thorny question,” he said.

“We’re right in the nuts and bolts of how you actually do this now. The first 10 years has involved doing things that were difficult and ambitious — but the next 10 years are much harder. As it gets progressively more difficult to decarbonize, to adapt to climate change, the political consensus is tested in each occasion by that.”

What has become evident is that it was possible to decarbonize at the scale that’s required, and it was much cheaper than previously thought, he said.

An example is offshore wind power in the U.K., which has attracted attention from fossil fuel giant Shell among others, despite the prospect of Brexit, the country's anticipated departure from the European Union, looming over future business decisions.

Stark said the U.K. government put in place strong policies to drive the growth of offshore wind, and industry has responded. That proved it was possible to decarbonize hand-in-hand with industry, he argued.

“What we need is a grown-up discussion about those industries diversifying and possibly partnering up with other parts of the economy, so you can get to the right outcome at the end of it,” said Stark.

“Politicians have to be grown-up about it too. We can’t push the difficult decisions down the line. Being grown up is about taking big decisions at the right moment, being supported of course by the economics and the evidence.”

By Carl Meyer | News, Energy, Politics | February 27th 2019
Reports from the Race to a Safer World

Leave the bitumen in the hole

Leave the bitumen in the hole in Northern Alberta where god put it to keep it away from people who can't wait for the end of the world.

If only Canadians elected

If only Canadians elected grown ups.

I have lived in a 100% fossil fuel free home (retrofit) outside of Ottawa since July 2018 and drive an Electric Vehicle. The job is not done as energy efficiency with energy flows and storage is a constant upward path that is likely to improve for years as new technologies (mainly hardware) and innovation (mainly procedural and AI) lead the drive. As such, I can back up the claim "Besides the global environmental benefits, Stark said, reducing home emissions saves people money as it cuts energy costs, and improves health, as less drafty homes have been shown to improve health outcomes and cut healthcare costs. Home energy retrofitting also spurs local economic development." I can't verify the health claims but I can the emissions and money claims.

I have given about 60 tours of the facility since July 2018 (our home is a living laboratory) and initial skeptics are all converted. Demonstrating what is possible is vital but I still get comments that sound like "I can't afford to not commit suicide."