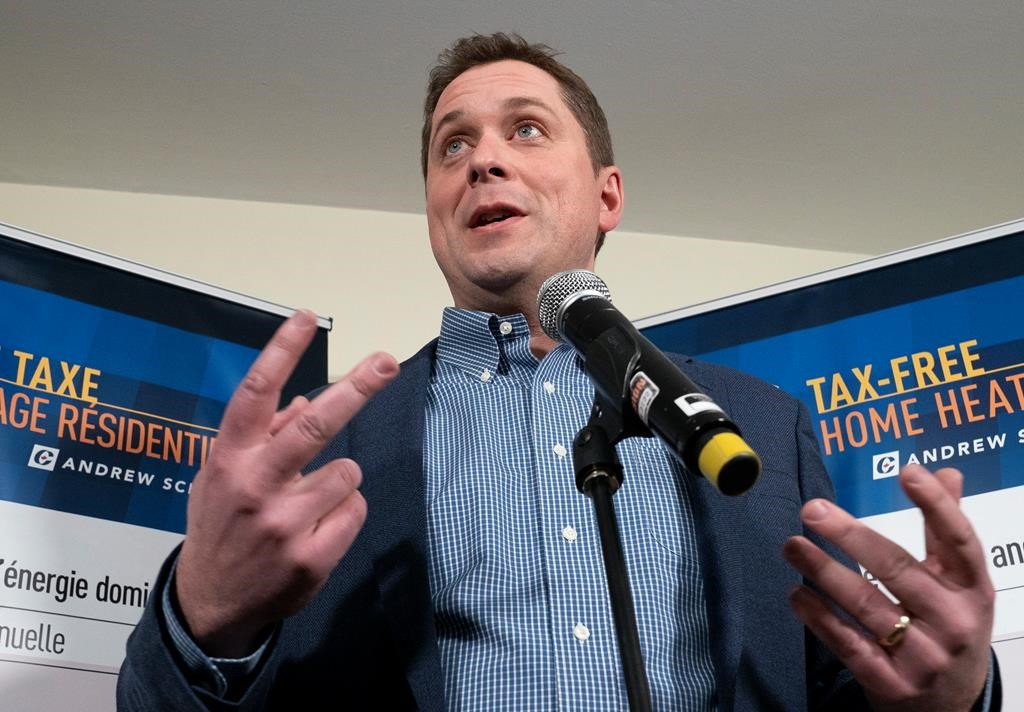 The federal Opposition leader came under fire from some on social media for not correcting the record when a participant in a Kitchener, Ont., town hall mentioned "pizzagate."

Pizzagate is an unfounded conspiracy theory that claims Democrats in the U.S. harbour child sex slaves at a Washington, D.C., pizza restaurant.

The reference came in a rambling question to Scheer that touched on immigration, foreign aid, homelessness and Canada's past donations to the Clinton Foundation.

Scheer responded about Justin Trudeau spending taxpayers money on his own personal projects such as the Clinton Foundation before transitioning to an answer about immigration rules.

Scheer says he didn't dispute the pizzagate reference because he didn't hear it.

"I heard the question was related to the government's — Justin Trudeau's — decision to give a grant to the Clinton Foundation. That is what I answered," Scheer said Friday in Rosser, Man. "I didn't hear anything about the other aspect."

After touching on spending billions on illegal immigration and suggesting Trudeau should be charged with bribery, the man mentioned foreign aid to Africa and Middle East and that "Mr. Trudeau must be smoking weeds himself."

He then turned to the Clinton Foundation.

"The Clinton Foundation is part of child trafficking and child sacrifice if you study it. It is in the pizzagate," the man said to applause from the crowd. "How do we get that money back?"

Scheer said at the time that he appreciated the man's concerns.

"I can assure you that, when you look at where Justin Trudeau has spent money, it's clear that a huge sum of the dollars that he has taken from Canadian taxpayers has gone to his own personal projects — you mentioned the Clinton Foundation, you mention there are other examples where Justin Trudeau's government has given grants to hire people for groups that are advocating for their own particular ideology," Scheer responded.

Canada donated $20 million to the Clinton Health Access Initiative in 2017. The money is to go to help young women in Nigeria with family planning.

Fuelled by conspiracy theorists, the pizzagate rumour gained such traction on the internet that it led a gunman to fire an assault weapon inside the Washington pizzeria in 2016.

Trudeau should be ordered to committee to explain his actions: Scheer

I certainly don't appreciate donating our tax dollars to any of the Clinton's organizations. Too keep this short - just look at what happened to Haiti through the Clintons.