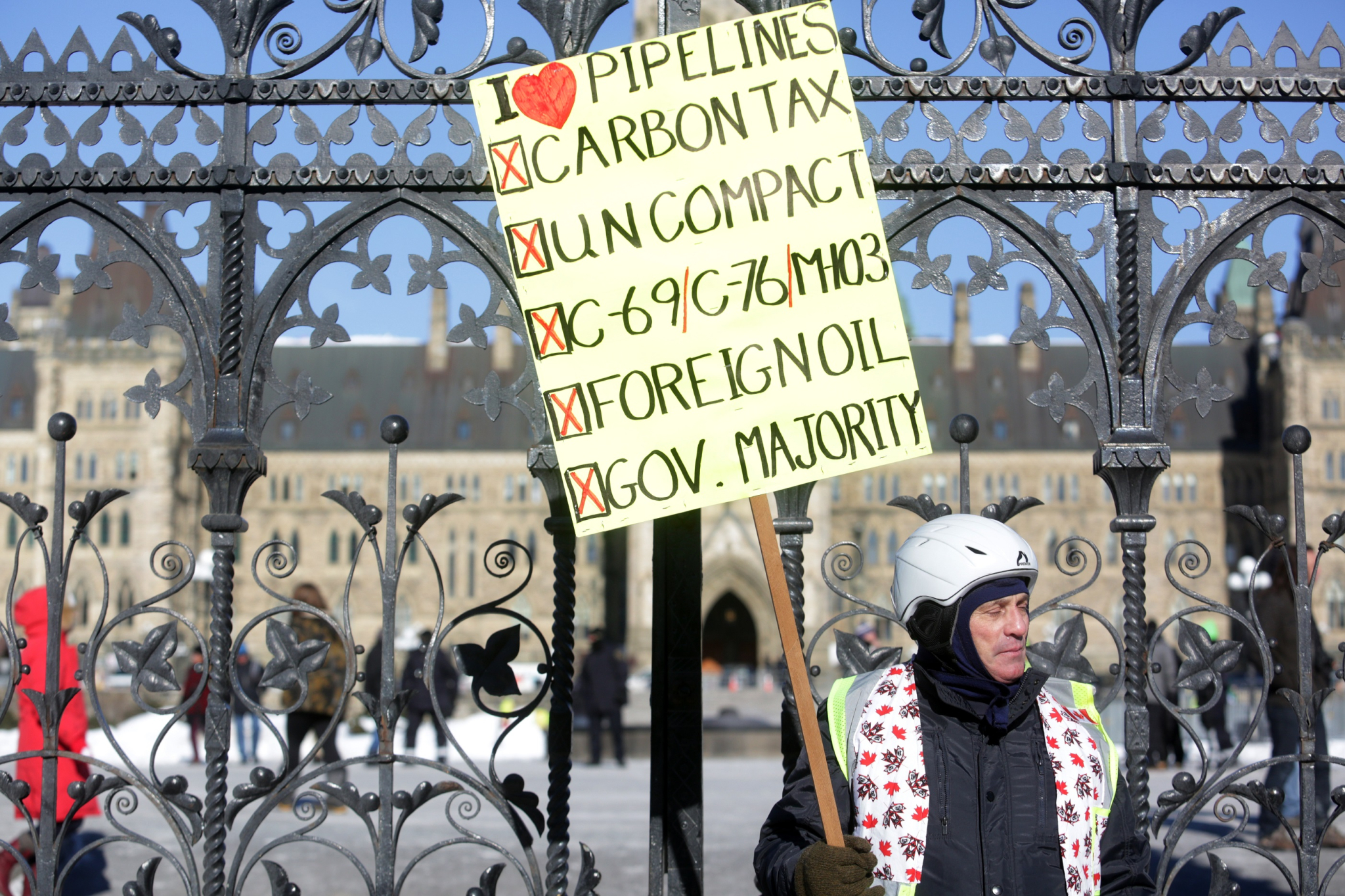 An attendee at the United We Roll convoy on Parliament Hill on Feb. 19, 2019. The sign rejects the non-legally binding UN migration pact as well as the non-binding House of Commons motion M-103 that condemned Islamophobia. Photo by Andrew Meade
Previous story
Next story

Two federal ministers say they saw racist and anti-immigrant views on display during a convoy of trucks that stormed Parliament Hill two weeks ago, and accused Conservative leader Andrew Scheer of failing to condemn those messages when he had the chance.

On Feb. 19, Scheer and other Conservative MPs spoke at the United We Roll convoy on Parliament Hill. The convoy had travelled from Red Deer, Alberta with the stated objective of raising "awareness for the oil and gas industry" and opposing Trudeau government environmental initiatives and Canada’s participation in a non-legally binding UN migration pact.

“We’ve got your back. We’re fighting for you. We are standing with you. We believe in you, we celebrate what you have done to build this country, benefiting every single region,” Scheer told the crowd.

The convoy, however, had transformed from an earlier incarnation associated with the Canadian “yellow vests” movement. The yellow vests have been the subject of a crackdown on death threats directed at Prime Minister Justin Trudeau, and accused of providing a platform for Islamophobia and anti-Semitic conspiracies. Organizers deny the group has racist tendencies and say they try to keep the community focused on political grievances.

At the rally on Parliament Hill, attendees chanted “Trudeau for treason” and mixed with people wearing “Make Canada Great Again” hats. Signs called for requiring photo ID to vote and rejected the non-binding House of Commons motion M-103 which called out Islamophobia. Former Toronto mayoral candidate Faith Goldy, who has said she doesn’t see controversy in a white supremacist slogan, appeared at the rally and tweeted that organizers said "they’re protesting globalism and the UN migrant pact."

'It’s not the right thing to do, for any leader'

Natural Resources Minister Amarjeet Sohi and Environment Minister Catherine McKenna both told National Observer they were disappointed in Scheer for appearing at the rally but not taking the opportunity to call out anti-immigrant comments.

"I think Mr. Scheer had the opportunity to...clearly say there, ‘Yes I support energy sector workers, but I denounce some of the hatred and bigotry and racism that has been displayed on some of those trucks. He missed that opportunity — I think it’s very unfortunate,” Sohi said in an interview Feb. 26.

“I think it is wrong. It’s not the right thing to do, for any leader, to be out there, and seeing the kind of slogans that were there, that were obviously racist and anti-immigrant, and trying to create fear, and seeing those and being there, as a leader of the official Opposition and not taking the opportunity to denounce, that is something that I find goes against the values that Canadians hold, very dear to them.”

McKenna said at a separate media event Monday that the convoy rally had “a lot of hatred, a lot of hatred towards immigrants, and that’s not acceptable.”

"I think it was really disappointing that you had Andrew Scheer, the leader of the Oopposition, standing with folks that have messages that Canadians don’t support,” she said.

“That it is fine to have concerns with environmental measures, to raise those concerns in a thoughtful way, but to the extent that we have people trying to divide us as a country, that’s not getting us anywhere.”

'Completely contrary to the values of Albertans'

(Sohi spoke to National Observer prior to the testimony by former attorney general Jody Wilson-Raybould at the House of Commons justice committee on Feb. 27. McKenna made her comments at an event that occurred hours before Treasury Board President Jane Philpott announced she was resigning from Trudeau's cabinet.)

Both Sohi and McKenna were careful to note that they felt anger with Trudeau government policies expressed at the convoy rally were legitimate political speech — but other comments crossed the line and were un-Canadian.

“I have lived in Alberta for 34 years, I live and breathe there. I absolutely understand the frustration of people about governments’ lack of ability or failure to move forward on market access, and getting our resources to global markets, and reducing our dependence on the U.S,” said Sohi, on the sidelines of a Canada 2020 event in Ottawa.

“But I think it is wrong to assume that people who have organized this convoy are reflective of Albertans. Some of the values that you see, or some of the xenophobia and racism, or anti-immigrant sentiments that you saw displayed in the convoy, are completely contrary to the values of Albertans...and Canadians’ values.”

Sohi said Canadians should be aware about the use of "disturbing" language. Saskatchewan Sen. David Tkachuk told the rally to “roll over every Liberal left in the country," comments that earned him a harsh rebuke from Canada's senior public servant. Tkachuk later defended his remarks as speaking "figuratively not literally."

“I think we always need to be vigilant about the fact that the slogans we have seen recently, that people feel that they have the license to have those kind of very disturbing messages displayed in a public place. I think that is a concern, absolutely," said Sohi.

'We’re stronger because we have a diverse country'

Speaking March 4 at an event promoting energy efficiency held at a Canadian Tire store in Ottawa, McKenna said “when it comes to Albertans, I know Albertans are hurting.”

She noted the provincial government of Alberta Premier Rachel Notley had promised to put a cap on carbon pollution from the oilsands, but that the government was also dealing with the problem of shipping its crude oil to overseas destinations.

“I understand that frustration, and I know that people want to express views on pricing pollution, on how we rebuild trust in environmental assessments. But unfortunately what we saw on display — with people that had those views — were unacceptable views, quite frankly, in the Canadian context...and I mean that not just on environmental issues, I mean this on the big issues that we face, when it comes to immigration. We know we’re stronger because we have a diverse country.”

McKenna was kicking off a month-long carbon price tour in her Ottawa Centre riding. She said the final details of the carbon pricing plan are being worked out in consultation with business associations. She also said she has told her department the plan should provide incentives for business to invest in energy-efficient projects.

'Liberals would love to distract from their own failures'

At the Feb. 19 rally, Scheer said he was “sick and tired of watching people chaining themselves to trees and laying down in front of bulldozers trying to block Canadian energy from reaching markets.” He also spoke about “a time when government didn’t have to build pipelines because the private sector did it with investors’ money.”

Other Conservatives who appeared in social media posts or reports on Parliament Hill during the convoy included Shannon Stubbs, Marilyn Gladu, Garnett Genuis, Pierre Poilievre and Brad Trost. People’s Party of Canada leader Maxime Bernier also gave a speech, where he said “if we don’t have an agreement with the politicians in Quebec or the politicians in B.C. we will use the constitution and impose a pipeline.”

On Feb. 26, Scheer doubled down on his appearance at the rally, telling reporters that the convoy on the Hill was “organized by people who have lost their jobs, who are facing tremendous anxiety about what the future will bring.”

“I know the Liberals would love to distract from their own failures by pointing to other elements that tried to associate themselves with the event. But my message was very clear, I was there to support energy sector workers, those who support our natural resource sector and promising hope for the future come October when a Conservative government will stand up for our energy sector and champion Canada’s oil and gas across the world,” he said.

Spokespeople from Scheer’s office did not immediately respond to a request for comment about comments made by Sohi and McKenna.

Well, yes. Leaders on the

Well, yes. Leaders on the right never miss an opportunity to ignore the bible-thumping cavemen in their party. They'd rather go down in flames later because they think they can't win with a moderate conservative view.

Why would the smarmy little

Why would the smarmy little prick condemn his base?

Why do Liberals name call? It

Why do Liberals name call? It is disgusting....and only serves to shut down constructive dialogue.

Constructive dialogue with Conservative ideologues is not possible. I spent the better part of a decade and a half trying. So I call the stupid fucks names because life's too short and I'm too old to give the idiotic motherfuckers any more significant energy.

Yes, but don't forget that

Yes, but don't forget that the issue at hand is name-calling a complete section of society as non-Canadian (by the right, in case you don't follow).

The truly sad thing is that

The truly sad thing is that Scheer and the Conservatives are taking reasonable conservative political ideology down the toilet by playing to the same ultra nationalistic, fundamentalist thinking base that supports people like Trump and other dictatorial types who lust for power and will use any means to get it and then tell the rest of us how we have to live -- according to THEIR version of the Koran. It makes it really hard to be a thinking person who can have legitimate conservative values. Where does one go? It is very sad, very divisive, very polarizing, and leaves no place for legitimate political discourse about ideas. Surely, we can be better than this.

To be honest, I find

To be honest, I find "reasonable conservative political ideology" to be bankrupt. Subtract the nativism and fundamentalist religion and whatnot, and conservatism is about as vacuous as liberalism but without the liberal tinge of compassion. There's nothing there except an economic ideology which is discredited every time anyone looks at it with any care, which persists only because it promotes upward redistribution of wealth. "Reasonable conservative political ideology" stands for nothing except taking most people's money and giving it to the rich.
It's no wonder they always end up leaning on the authoritarian social-conservative right, who at least have some kind of message, compelling if brutally wrongheaded, to distract from the basic kleptocratic agenda.

Liberals want a kinder, gentler kleptocracy. Their distraction is "being nice". Sure, they want to help the oil companies and the SNC-Lavallins and the Deloittes grab our stuff--but they want to keep a bit and use it to make the results not quite so bad, and they genuinely want to be anti-racist and whatnot at the same time, in a notional sort of way. They feel our pain while they pick our pockets.

Is there a party that DOESN'T want to pick our pockets? Well, maybe the NDP, but even they can usually be bullied into it. With the NDP it's like "I don't want to help big corporations pick your pocket, but the news people will call me socialist if I don't! Look, I'll try to arrange so you can leave a bit of money in a different pocket. Maybe that'll be OK if nobody notices."

The Greens duck the issue by saying it doesn't matter if our pockets are being picked as long as we protect the environment. Pocket-picking can go on as normal because they're post-ideological about pocket-picking.

I would have preferred these

I would have preferred these MPs to say something to Scheer to his face in Parliament. This is a bit to weak for this kind of dangerous dog-whistling.