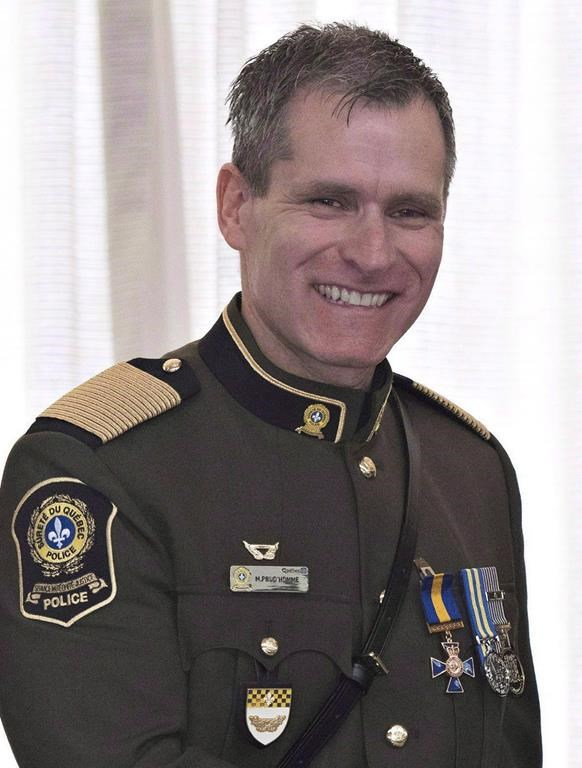 Martin Prud'homme, newly-appointed interim chief of police in Montreal, smiles after he was decorated Officer of the Order of Merit of the Police Forces at Citadelle in Quebec City on Dec. 7, 2017. File photo by The Canadian Press/Jacques Boissinot
Previous story
Next story

The past two years have not been easy for Quebec's three major police forces, whose officers have been working in a climate of suspicion, scandal and now an allegation of criminal wrongdoing at the highest level.

Internecine rivalries have divided the Montreal police. Provincial police officers were accused of abusing Indigenous women in the northwestern city of Val-d'Or. And the anti-corruption unit, known as UPAC, has suffered from low morale, recruiting difficulties and a string of embarrassing and damaging leaks to the press.

And this week, provincial police chief Martin Prud'homme was suspended pending the results of an investigation into an allegation he committed criminal offences.

Criminologist Maria Mourani, a former Bloc Quebecois MP from Montreal, said it is hard to assess whether Quebecers have begun losing confidence in their police forces.

"Every organization has its issues," she said in a recent interview. But that fact the public is aware of the many problems is a sign democracy is working, Mourani added. "If there was serious rot or a major crisis in the police, then I'm not sure if we would even know about it, because it would be endemic, and there would be a code of silence and it would continue."

Prud'homme had just returned to the Surete du Quebec after spending a year as interim chief of the Montreal police, dispatched to set things straight following the suspension of Philippe Pichet. Pichet's suspension as chief followed reports the force's internal investigations unit had exaggerated or fabricated evidence against officers and helped created a climate of vengeance and mistrust.

On Friday, Public Security Minister Genevieve Guilbault told reporters if Prud'homme is cleared of wrongdoing, he will be able to return to his role. But she has so far given no details about the allegation against him.

Several Quebec media have reported his suspension was connected to an investigation into leaks to journalists in 2017 about a highly sensitive UPAC probe of the Quebec Liberals and former premier Jean Charest. Media have reported that two former UPAC officers who were involved in the unit's internal investigation into the source of the leaks — and have since returned to the provincial police — have been assigned to desk duties.

The investigation into Prud'homme is being conducted by Quebec's police watchdog, the Bureau des enquetes independantes. That bureau was also given a mandate in October 2018 by the provincial government to investigate the UPAC leaks.

Guilbault said the allegations against Prud'homme — who has not been arrested or charged with a crime — are "delicate and complex." She said the government had to "act quickly and in order to protect the integrity of the institution that is the Surete du Quebec and citizens' trust in their institutions."

Francois Dore, a retired Quebec provincial police officer who also worked for Interpol, said people expect more from their police forces than they did when he started working in law enforcement in the late 1970s.

"I don't think there is a lack of confidence," he said in an interview this week. "What reassures me is that people are asking more questions. They want to know what's going on."

In recent years, however, Quebecers have not received a lot of answers. Much of the current uncertainty can be traced to a 2017 Quebecor media expose of documents related to a UPAC investigation of Charest and former Liberal party treasurer, Marc Bibeau.

The leak revealed UPAC had put Charest and Bibeau under surveillance as part of their probe dubbed "Machurer," which looked into suspected illegal party financing. Charest's personal finances, passport information and details of his trips across the U.S. border had all been collected by investigators, and the information was obtained by Quebecor. Neither Charest nor Bibeau has been charged.

Dore said what remains unclear is whether the documents were leaked to help push the investigation forward, or to protect Charest and Bibeau. Former UPAC head Robert Lafreniere vowed in 2017 to catch the "bandit" responsible for the leak.

In October 2017, Guy Ouellette, a Liberal member of the legislature at the time, was arrested by UPAC on suspicion he was involved in leaking the information about Charest and Bibeau. Ouellette, a former provincial police officer, denied the claims and was never charged.

In another wrinkle to this story, Lafreniere, who had sought and received a second mandate as head of UPAC under the previous Liberal government of Philippe Couillard, quit without explanation last Oct. 1 — Quebec election day.

Despite the seeming turmoil afflicting the province's three main police forces, the work on the ground is still continuing, Mourani said: "I wouldn't say there is a crisis .... We can say that the police are professional."

What is it about Quebec? Is

What is it about Quebec? Is Quebec an ancient aboriginal word for corruption?