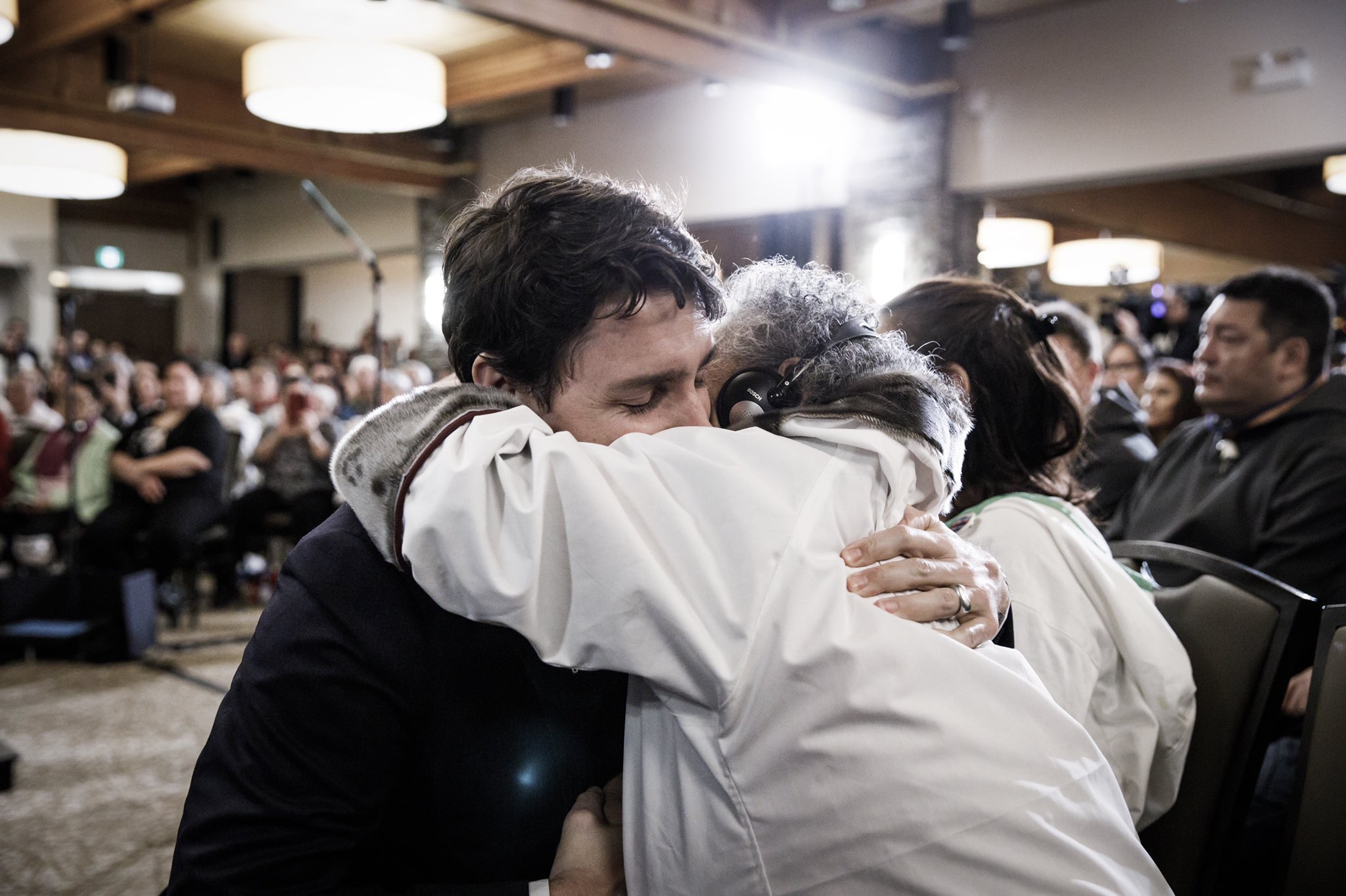 Prime Minister Justin Trudeau embraces an Inuit elder at an event in which he delivered an apology in Iqaluit for Canada's treatment of Inuit people following outbreaks of tuberculosis from the 1940s to the 1960s. PMO photo by Adam Scotti
Previous story
Next story

It was an apology decades in the making.

Initially delayed for a day by a storm, Prime Minister Justin Trudeau arrived in Iqaluit, capital of the Arctic Canadian territory of Nunavut, on March 8, to deliver an historic apology to Inuit communities.

The apology, on behalf of the Crown, was related to the federal government's mismanagement of tuberculosis in the Arctic from the 1940s to the 1960s.

"For too long, the government's relationship with Inuit was one of double standards, and of unfair, unequal treatment," he said. "Canada must carry that guilt and that shame.”

Here's what you need to know about the issue and why it matters.

Tuberculosis or TB is an airborne disease that can be cured with treatment with several antibiotics. It can take six months to ensure all TB bacteria has been eliminated. Stopping treatment early can make a patient seriously ill, lead to them developing a drug-resistant strain, or pass it on to others.

It is more likely to afflict those whose immune system cannot fend it off, including people who are malnourished or live in substandard housing.

The Public Health Agency of Canada says there were 1,796 active cases diagnosed in Canada in 2017.

Are there still tuberculosis outbreaks?

As much as one-third of Canada’s Inuit population had tuberculosis through the 1950s and the curable disease remains a big problem, blamed on inadequate housing, food insecurity, poverty, and the enduring impact of the previous TB control measures (which make many Inuit reluctant to seek out government-supplied medical treatment).

Inuit are spread thinly but in overcrowded communities across remote Nunavut, which makes up most of Canada’s Arctic archipelago and is the fifth-largest country subdivision in the world, as well as in parts of northern Quebec, northern Labrador, and the Northwest Territories.

The federal government has said it aims to eradicate TB from Inuit communities by 2030, an ambitious goal given that the rate of infection among Inuit is almost 300 times that of Canadian-born non-Indigenous people.

It is investing $27.5 million over five years to the Inuit-led eradication plan, which also aims to cut active TB cases by 50 per cent within six years.

Why did Trudeau apologize?

It was government policy to screen Inuit without their consent and separate those who contracted tuberculosis from their family members by shipping them far from their homes for treatment in southern Canada from the 1940s through the 1960s.

Many patients lived in sanatoriums for years, and their families often weren't told about their whereabouts or conditions, even when they died.

Trudeau said the policy was “colonial” and “purposeful” and that the government knew it was taking a toll on Inuit communities.

A representative with Nunavut Tunngavik Inc., a representative group for Inuit in Nunavut, estimated there are between 700 and 800 people who never returned home, and whose grave sites remain unknown.

During the tuberculosis epidemics, the Canadian government mistreated Inuit, separated families, and took people from their homes. Yesterday, we apologized for the wrongs of our past, so we can look ahead to a better future. Read my statement of apology: https://t.co/8VLkI8UniC pic.twitter.com/zp6QqzzZpX

What else was going on at that time?

While Ottawa was disconnecting Inuit TB patients from their culture and language, it was also heaping other injustices on the population, including identifying Inuit with numbers on leather identification tags instead of by their names, punishing children for speaking their Inuit languages, having their sled dogs teams killed by officials, and moving them away from their homes to assert Canadian sovereignty.

What is Canada doing to make amends?

As part of the apology, Trudeau's government also launched a database of known grave sites of those who died during treatment.

The Nanilavut initiative (which means "let us find them”) will make records available to Inuit to facilitate finding family members' grave sites and in some cases pay for travel to the sites and plaques for the graves. Work on collecting the records has been ongoing for almost a decade.

“Nothing can bring back the voice of a parent or the embrace of a friend, but acknowledging where they were laid is a start in honouring their memory,” Trudeau said.

What was the response to the apology?

Several Inuit leaders acknowledged the apology as a helpful, but long-overdue, first step to closing that chapter of Canadian history and working on fixing ongoing problems.

Natan Obed, president of the Inuit Tapiriit Kanatami, took to the stage after Trudeau’s apology to thank him for placing it in a broader context of colonial attitudes and human rights abuses “but also Canada’s commitment to change that narrative.”

“Each one of these cases should never have happened and is heartbreaking, and to hear the prime minister apologize for that unequivocally I do hope will help with the healing process for so many who have gone through so much,” he said.

Obed also delivered a message to journalists who asked questions about other issues at the news conference, noting that Inuit were ignored for decades, and suggesting that they could continue to be ignored unless the media starts telling their stories.

"But the fact that media passed right by the people whose human rights abuses were not told by the media for decades to other stories of the day is still a reflection on the work that needs to happen in reconciliation. The Inuit who were apologized (to) today matter. This story matters. It is a Canadian story," he said.

"And I recognize that there are other media stories that matter as well. But I do hope in the future there can be more respect given to the place and time and the people who deserve to have their story told. And the media have a strong role to play to tell it."

'Where is she buried?' Government prepares database on Inuit tuberculosis graves

The crimes against the Innu

The crimes against the Innu and other indigenous people in the north continues today. Apologies are cheap, it takes real resolve to rectify the injustices perpetrated against the people on whose land we abide.