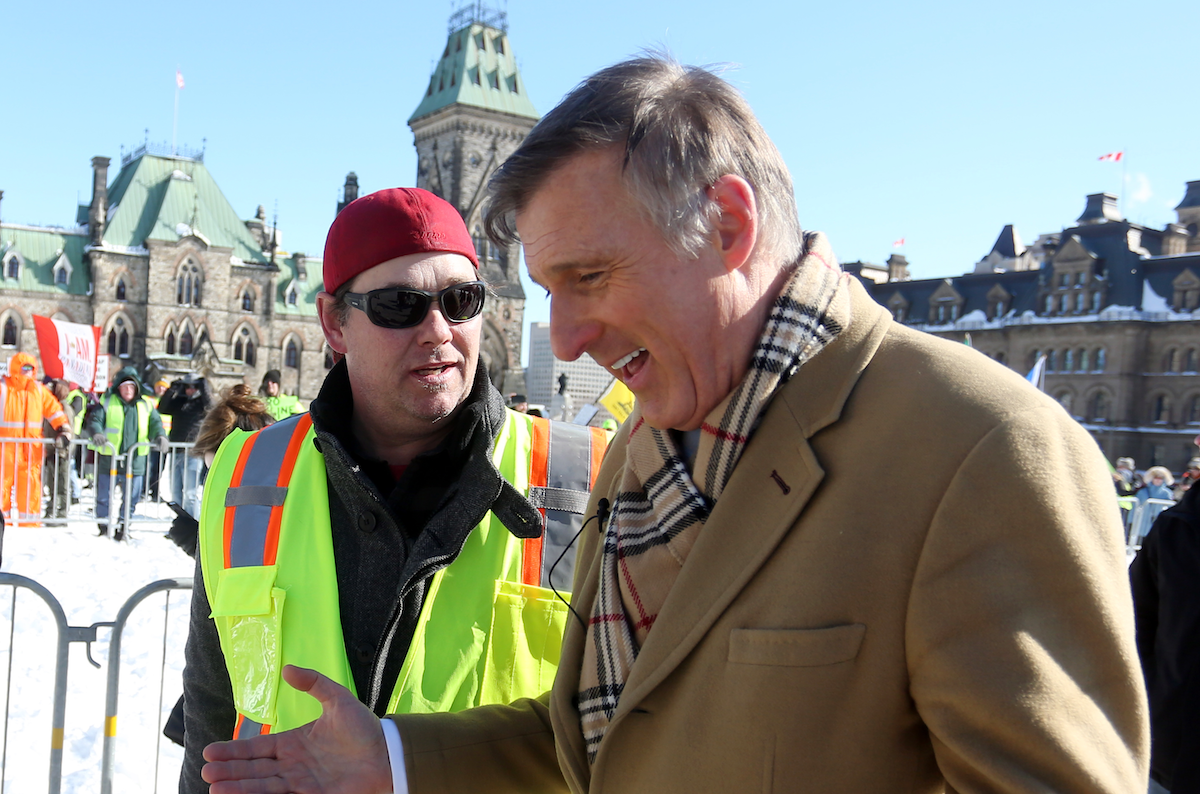 Maxime Bernier, the leader of the People's Party of Canada, smiles as he walks among pro-pipeline and anti immigrant protesters in Ottawa on Feb. 19, 2019. File photo by Andrew Meade
Previous story

This past week, the world witnessed one more horrific act of white-supremacist terrorism as 50 people were killed and another 50 seriously injured in mass shootings at two mosques in Christchurch, New Zealand. Yet as Muslim communities around the world mourn, too many people in positions of power and influence continue to collectively deny that far-right hate and right-wing terrorism have become festering problems that endanger us all.

One hundred per cent of all terrorist attacks carried out on U.S. soil last year were carried out by right-wing extremists, yet far too many politicians and pundits continue to treat their actions as the isolated acts of disturbed, radicalized lone wolfs with mental health issues, and not the direct consequences of public rhetoric that purposefully and irresponsibly stokes anti-immigrant and anti-Muslim fear and hate.

Innocent people are being gunned down in their places of worship and mealy-mouthed, spineless politicians – from Donald Trump to Maxime Bernier – continue to muzzle their words, choosing not to acknowledge Islamophobia as a problem because it doesn’t further their political agenda or play to their base. On the contrary, while the killer's manifesto posted online hailed Trump as a symbol “of renewed white identity and common purpose," not only did the U.S. president not rush to condemn white nationalism, he downright dismissed it as a "small group of people with very serious problems." By the next day, he was busy tweeting about Saturday Night Live and the comedy show's "unfair" depictions of him.

I’m tired of the double standards in how terrorist attacks are reported and how the perpetrators are treated depending on who they are. I’m tired of watching media outlets splash baby pictures of white mass murderers, trying to humanize and solicit sympathy for killers who had none to spare for those who were slaughtered.

I’m disturbed that most Canadian media outlets choose to report that Quebec City mosque shooter Alexandre Bissonnette was “disturbed” by the news that he was one of many who inspired the killers’ actions, as if it were necessary to solicit or share his opinion at all. Why should the media be complicit in disseminating the fake remorse of a murderer, communicated via his lawyers who are, coincidentally, currently appealing his life sentence?

I’m tired of watching the media invite the wrong people to speak on these tragedies, amplifying their voices and giving them a platform that they don’t deserve. In France, Robert Ménard, an extreme-right mayor who believes in the white supremacist theories of the “great replacement” (which claims that the Christian majority is being replaced by Muslims, a theory that further fuels hatred against immigrants and Muslims), was invited to speak on the New Zealand tragedy. After all, who better to share their thoughts on the news of 50 Muslims being gunned down by a man who proudly flashed the White Power sign while being charged, than a white supremacist who shares his views?

I’m tired of so many of our pundits and people gifted with national platforms pretending it’s normal and somehow acceptable that Canadian “thinkers” like Jordan Peterson -- the intellectual darling and patron saint of those perpetually angry at correct pronoun usage – poses undisturbed in pictures with a man wearing a T-shirt proudly proclaiming him to be Islamophobic. Incidentally, Peterson believes "Islamophobia is a word created by fascists and used by cowards to manipulate morons.”

"It’s high time we saw the obvious, very direct line between the discourse we allow in daily political life and the actions it inspires", @ToulasTake writes. "White-supremacist terrorism is every bit the ideological twin to ISIS jihadist terrorism."

I don’t want to hear from the Peterson peanut gallery, informing me that celebrities pose with many folks during meet-and-greets, and that they’re not responsible for their beliefs or behaviors. They are, if their social acceptance condones those beliefs and that behavior. If Peterson purports to be intelligent enough to publish self-help books on how to help us live a better life, maybe Rule 1 should be “Don’t pose with people proudly proclaiming their fear and loathing of a religious group."

Hate speech is not free speech

In the name of “freedom of speech” and respect of all opinions, we have allowed far too much ugliness to persist and given a stage to hate for far too long. Trump has made many populist politicians realize that pandering to people’s fears and frustrations can pay handsome dividends. Many of these people in power or in the race for power straddle that fence, skirt carefully and strategically around that fear and prejudice and use it to their advantage. Not all are outright racists, but they don’t mind playing to that base, if votes can be won, and that makes them just as complicit.

These politicians and pundits ignore the messages of hate, the worrisome associations, and the dangerous implications of being seen supporting what should never be pandered to. They convince themselves that they are not responsible for neither the association, nor the consequences. They make allowances for themselves, and we, in turn, often do for them, as well. We, collectively, have allowed this.

Here in Canada, we have Conservative Leader Andrew Scheer (whose campaign manager Hamish Marshall co-founded far-right news site The Rebel) speaking at events where Faith Goldy and other far-right extremists spoke of the threat of an “immigrant invasion” and how it threatens Canada as we know it. This isn’t idle talk; this is the kind of rhetoric that has contributed to the steady rise of hate crimes targeting religious and visible minorities, and it has very real and devastating consequences for the people targeted. You know who else talked of invasions? The New Zealand gunman in his manifesto. It mentioned the words “invasion” and “invaders” 53 times, in fact.

I’m tired of politicians like François Legault claiming Islamophobia doesn’t exist in Quebec, washing his hands and absolving himself and the rest of us of a very real problem that needs to be tackled. How can anyone claim that Quebec is exempt from a problem seen all over the world right now, while a man who gunned down six innocent Muslim men in a Quebec City mosque is currently in jail, his name written on the New Zealand killer’s gun like a sick love letter and homage? How can we claim we, too, don’t have a problem in Canada when major news outlets are often forced to deactivate their comments sections because of the abusive and rampant anti-immigrant and Islamophobic hate being spewed on there daily?

Why are we tolerating intolerance?

I’m tired of seeing people tolerating intolerance in the ones who should know better. The ones who have the intellect to know this kind of talk is dangerous and still allow it anyway – nay, defend it – because “we should be allowed to say and debate anything” as if words don’t seep into people’s psyche and poison it. Why are people like Faith Goldy, Lauren Southern, and Stefan Molyneux allowed to spew their racist, toxic, white-supremacist drivel on Canadian campuses, as just another harmless, but controversial, point of view worth debating?

I am tired of reporting vile hate speech on Twitter only to be told that it doesn’t violate Twitter’s standards. Maybe Jack needs to rethink his standards. I am tired of seeing platforms like Instagram and Facebook reacting quicker to censor female nipples than outright hate speech and live-streams of massacres.

It’s high time we saw the obvious, very direct line between the discourse we allow in daily political life and the actions it inspires. We need to de-platform hate speech, send a clear message to populist politicians who continue to claim the West is under attack from Islam, demand more than half-baked messages of support and condemnation, and acknowledge and combat right-wing terrorism with the seriousness it merits.

White-supremacist terrorism is every bit the ideological twin to ISIS jihadist terrorism. It contains the ability to radicalize and inspire the same kind of single-minded, pernicious hate, death and destruction – perhaps even more so, because it continues to benefit from the denial of people who refuse to see it as the global threat that it is.

Writer Solomon Georgio recently said, “The hate we allow, inspires the hate we condemn.” It is vital that our elected leaders speak out clearly against Islamophobia and against the normalization of all forms of hate against religious and visible minorities. We can no longer afford to dismiss the direct link between socially permissible hateful discourse and the hate-filled actions it inspires. To do so is irresponsible and dangerous.

Thank you. Keep writing about

Thank you. Keep writing about this topic. We need it on the front burner.