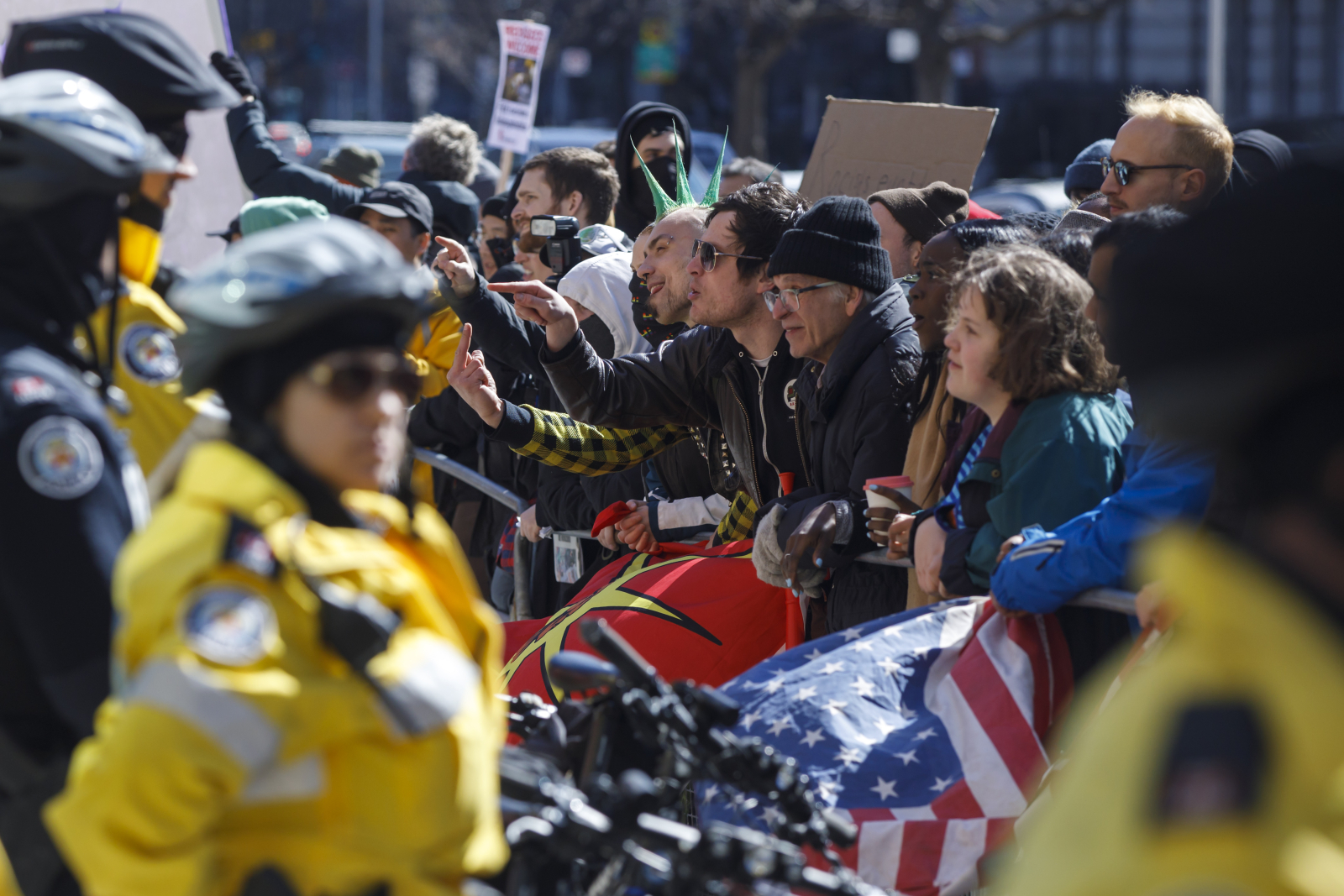 An anti-fascists and other anti-racism activists taunt anti-Muslim protestors at a rally in downtown Toronto on Saturday, March 23, 2019. Photo by Cole Burston
Previous story
Next story

Over two hundred anti-racism activists surrounded and drowned out a small group of far-right protesters Saturday in Toronto, foiling their efforts to spread an anti-Muslim message through the streets of downtown.

Between a barricade of police, bicycles and guard rails, anti-fascists shouted at men wearing Make America Great Again (MAGA) caps in a showdown that lasted all Saturday afternoon.

The original far-right protest was organized by Patriots of Canada Against the Islamization of The West (Pegida Canada) — a local chapter of a larger international movement that has been attracting and fostering hatred towards Muslims around the world.

The red MAGA hats, often seen during the 2016 campaign of U.S. President Donald Trump, are considered by many to be an offensive and provocative symbol of white nationalism.

This confrontation in Toronto came days after a “Unite Against Racism” rally in Nathan Phillips Square, which paid homage to victims of the terror attack in Christchurch, New Zealand, which left 50 people dead. Several far-right activists attended the vigil and a fight occurred.

Between the horns, sirens, and chants of “racists go home” and “shut it down,” the hundreds of people who showed up to counter-protest, drowned out the hate-provoking message of the Pegida Canada activists who numbered less than two dozen.

“We are fighting for justice on land with a long history of white supremacy,” said a community defence volunteer for Toronto Against Fascism.

He refused to give his name, wearing a black mask and sunglasses out of fear of being doxxed by his adversaries. Toronto Against Fascism was also supported by Intersectional Anti-Fascists Toronto, and Toronto IWW General Defence Committee Local 28.

“Canada may talk about being for justice, for freedom, for reconciliation,” said the TAF speaker, “but the fabric of white supremacy is woven into its territory as deeply as the maple leaf is woven into its flag.”

'It's fear of the unknown'

Inspired by the terror attacks in New Zealand nine days ago, TAF said they helped organize the counter-protest to fight against Islamophobia, white supremacy and racism.

Sitting beneath the Toronto Against Fascism speaker who was using a megaphone, on the cement curb, was author Nazneen Sheikh. She spoke with National Observer later on.

The word “Islamophobia” still doesn’t have everyone convinced it’s the best word to use, and Sheikh spoke to this while smoking a cigarette outside the courthouse on University Avenue.

“The word Islamophobia is ridiculous and it shouldn’t be used,” Sheikh said. “Something that has a phobia is a psychological condition, it’s a medical condition. This is sheer hatred. It is the fear of the other side…. It’s the oldest fear in the world.”

Sheikh said it was lovely to see young boys “shooting from the hip” in their opposition to Pegida.

When reporters approached the barricade in an attempt to interview Pegida members, they were quickly drowned out by the horns and sirens of counter-protestors.

Jesse Dylan was one of the protestors opposing the media for what he said would be legitimizing Pegida’s viewpoints on Islam and immigration.

“This is not the last alt-right attack we are going to see,” said Dylon. “It’s going to get worse and places of worship might get more massacres and the mainstream media is going up to them as if they have a legitimate point of view. That’s not a side you want to put on the evening news.”

The counter-protest attracted people from across the city, including immigrants, families, and veterans who were inspired by the New Zealand tragedy to show their opposition to Pegida’s message of securing borders against “Islamization of the West.”

Jessica Munro stood with her father and two children with signs in front of one of the barricades, expressing her belief in equality, human rights, and accepting refugees.

“I think it’s lovely that so many Torontonians have come out to oppose them,” said Munro, “and there is far more of us than [there are of] them.”

Ian Smart said he came back from the Vietnam War in 1968. He said his father was a veteran in the Second World War and fought against fascism.

Jenny Hill, director of Pegida Canada, said the group got together in response to conflicts happening in Europe.

Toronto Mayor John Tory wasn't buying any of the arguments from Pegida, expressing his displeasure about the group, prior to the event.

“I strongly condemn the ideology and tactics of white supremacists planning to demonstrate and disrupt today in our city,” he wrote on Twitter.

I strongly condemn the ideology & tactics of white supremacists planning to demonstrate & disrupt today in our city. There is no place for them in our Toronto. I’ve spoken to Chief @marksaunderstps. He assures me police are aware of event & plans are in place to deal with it.

As Pegida left the barricaded area on Armoury Street, the larger group followed and swarmed, surrounding the police escorts who then used their bicycles to fence off the area. Pegida members were forced to wait there with their signs.

Chants of “they march, we march” from counter-protestors ensued. Then verbal spats between opposing sides lasting upward of an hour, preventing the Pegida group from pursuing their march through city streets.

More police arrived and waited for the right moment to engage, slowly moving closer toward the circle of tension, splitting up the groups and providing safe passage for Pegida to leave.

With police escort, the small group of far-right protestors eventually walked back to University Avenue and left the area as counter-protesters chanted and yelled behind them.

“What we really want to see is secure borders, we would just like to see stricter security,” said Annette Morrison, who is also the leader of the Wolves of Odin, another far-right group.

She didn't explain what she meant by her proposals, nor how they would benefit Canadian society.

Pegida Canada supports the admission of war refugees and political refugees or those who suffer religious persecution. It also supports “the utilization and implementation of existing laws on asylum and deportation,” according to its founding principles.

The group also denies allegations of racism and fascism.

A quick scan of Pegida’s social media accounts, however, reveals a different narrative — one that includes a mixture of hatred and conspiracy theories.

For example, one posting suggested arresting all people who practice Islam, seizing their assets, and bulldozing temples.

Another responded that Islam should be banned from both Canada and the United States, while someone else described an unfounded conspiracy theory of how “the globalists” use pawns to create violence and division among the citizenry for an easier takeover of society.

Meantime, Hill, the Pegida director, later posted a video of herself giving an interview of the rally on social media, complaining that it hadn't made it onto the evening news.

The organization, however, thanked the police on social media after the rally.

“Our message to the public is if something concerns you, speak up,” Hill wrote in an email. “Contact officials, mosques, law enforcement, wherever your concerns are, and always with respect.”

The group also rejects white supremacy and the notion that they were partly responsible for the New Zealand terrorist attack. This despite evidence showing that the main suspect said he was inspired by the rhetoric of far-right groups like these.

People have the most peculier

People have the most peculier ideas about conspiracy. To be successful, it must remain secret. Secrecy as a viable strategy is virtually impossible in today's world. Between hacking, saturation surveillance, AI, facial recognition, 24/7 reportage on digital media.... nothing can be secret for long. A "secret society"? The perfect oxymoron - on the order of "military intelligence" !!

When you consider the trail of violence, oppression, hate mongering, and political opportunism that trails in the wake of most religions like a nasty stink, then phobias about religions makes rational sense. It almost seems as though "religions" are merely tools enabling the noxious human habit of power grabs.

Conspiracies are perfectly possible in the modern world. It's just that they generally aren't very effective or cohesive. They never were. You just can't get whole bunches of people to stay loyal to some obscure cause over time; even if some semi-secretive group manages to exist for quite a while, its causes will be forgotten; the core programme will end up just to be an old boys' network for the members.

The closest thing we have is billionaires getting together to plan how they want the economy to work and how they're going to push administrations into doing things their way. This works because the super-rich all have the same basic interests--lower taxes on the rich, bigger subsidies, fewer unions, lower wages, wider-open finance, more international financial mobility and so on. It's not really secret--they have these meetings in Davos, meetings of the Bilderberg Group and the Trilateral Commission and so forth, which are all publicly announced although the actual discussions are generally secretive behind closed doors. But this stuff is rarely framed as a conspiracy, perhaps partly because the billionaire media owners are generally at the meetings.
In short, the only real, viable conspiracy is the one based on class.