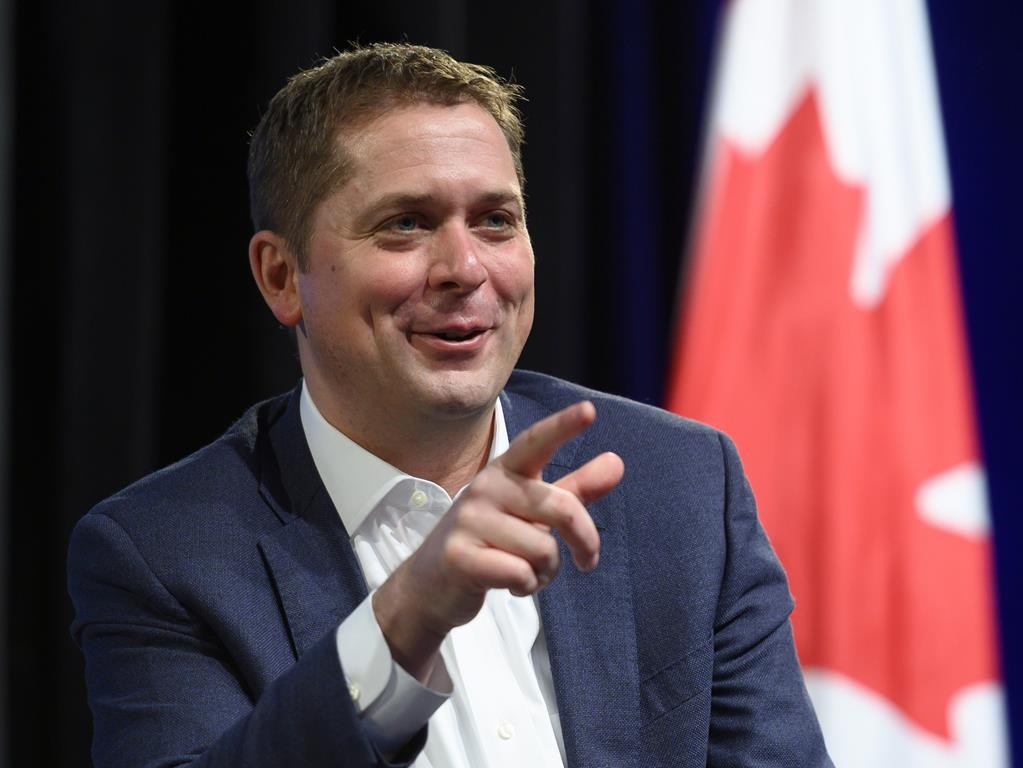 Conservative Leader Andrew Scheer takes part in an armchair discussion at the Manning Networking Conference in Ottawa on Saturday, March 23, 2019. Photo by The Canadian Press/Justin Tang
Previous story
Next story

Andrew Scheer says criticism over his initial failure to mention that Muslims were targeted in the recent mass murder in New Zealand is "completely baseless" and driven by "disgusting" Liberal efforts to score political points from the tragedy.

But in answering a question Saturday about how he deals with that criticism, the federal Conservative leader once again initially made no reference to Muslims.

"I deal with it by pointing out that the criticisms are completely baseless," Scheer told the Manning Networking Conference, an annual gathering of this country's conservative thinkers, strategists and politicians.

"When you look at statements I've made condemning hateful ideologies, those who would promote any type of superiority of one race or religion over the others, I condemn that unequivocally."

Scheer noted that the second statement he issued on the day of the New Zealand shootings "absolutely did include the reference to the faith community that was attacked," although he did not at first identify that faith community.

On March 15, an avowed white supremacist shot and killed 50 Muslim worshippers at two New Zealand mosques. In a statement posted that day on Twitter, Scheer condemned the attacks as "a despicable act of evil" against "peaceful worshippers," without specifically mentioning where they occurred or who was targeted.

A few hours later — after the initial statement drew criticism — Scheer issued a second statement, which he referred to Saturday as his "official statement." It specifically referred to the horrific "terror attack on two New Zealand mosques" and voiced his “profound condemnation of this cowardly and hateful attack on the Muslim community.”

On Saturday, Scheer blamed the Liberals for stirring up the controversy, accusing them of attempting "to score cheap political points in a very disgusting manner." Moreover, he argued that initial tweets by Public Safety Minister Ralph Goodale and Governor General Julie Payette also didn't specifically mention mosques or Muslims.

Later, as he took questions from members of the audience, Scheer was asked why he's never said the word "Islamophobia."

"I don't believe that's true," he responded, noting that all parties supported a motion last week in the House of Commons. That motion, which he didn't describe, condemned the mosque attacks and affirmed the need to "confront hatred, Islamophobia, and white supremacy, in all their forms."

"I reject anyone who would speak out based on Islamophobic principles, whether or not that's somebody who is trying to lump all people of the Muslim faith in together or whether it's people who are trying to antagonize elements of society to have a more negative reaction to those who practice that faith," Scheer added.

"To me the important thing is to speak out against those who in any way give oxygen or space to those who are trying to promote one group of people over the other."

Scheer also used his appearance at the Manning conference to promise that a Conservative government would balance the federal budget — but he didn't say when.

He said the Liberals have made such increases to government spending that a Conservative government could get most of the way to balance simply by holding annual spending increases to the rate of inflation and population growth. As well, he said billions could be saved by scrapping "some big-ticket items" introduced by the Liberals such as the federal infrastructure bank.

The longer Prime Minister Justin Trudeau goes racking up large annual deficits, the harder it will be return to balance, Scheer suggested. But he said Canadians have "a window" in this fall's federal election to "limit the damage and get back to balanced budgets over a shorter period of time."

Finance Minister Bill Morneau's latest budget forecasts deficits of almost $20 billion in each of the next two years, declining to just under $10 billion in five years. It makes no attempt to forecast when the budget might be balanced.