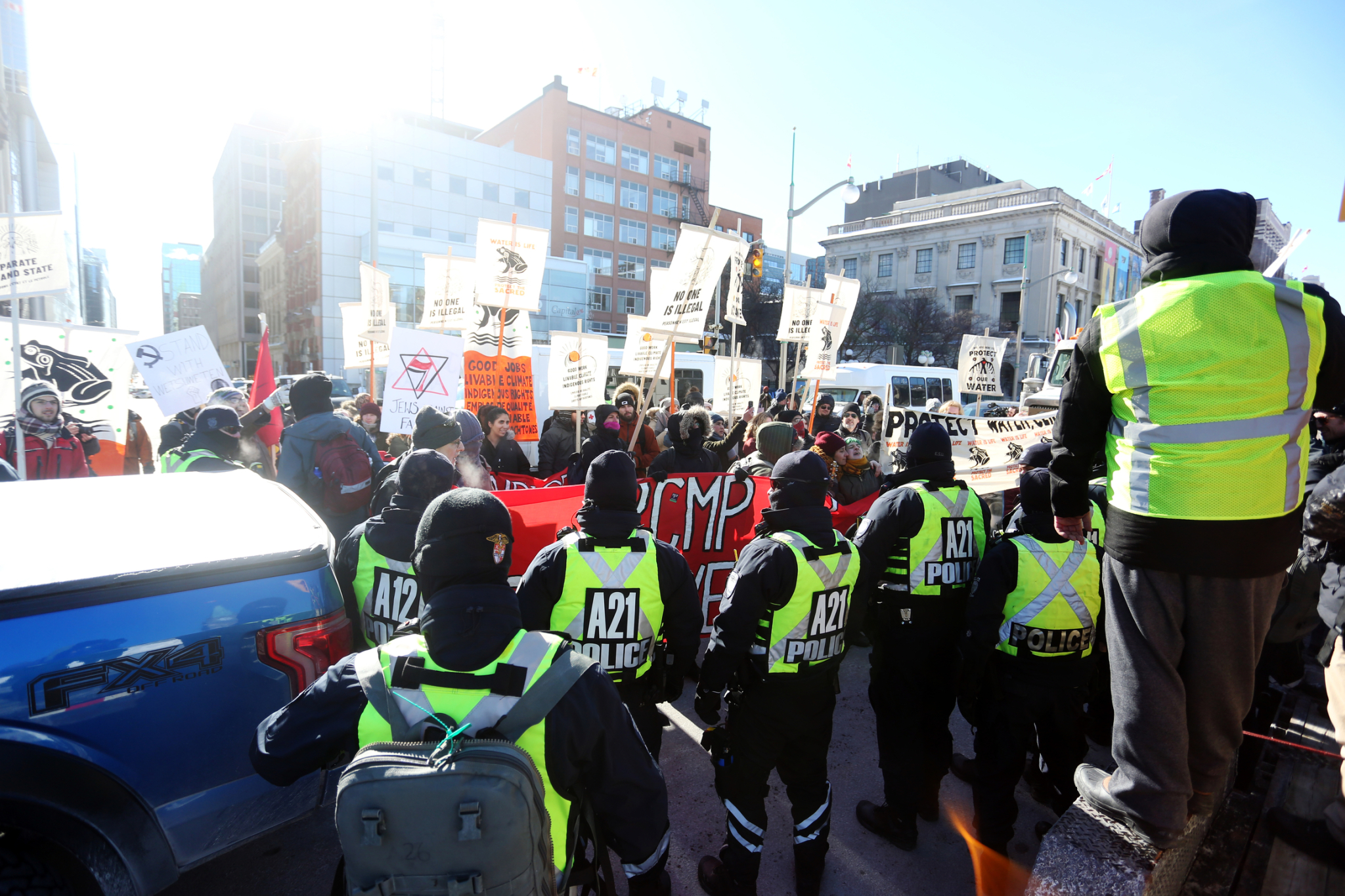 Members of the United We Roll convoy gather in Ottawa on Feb. 19, 2019. Photo by Andrew Meade
Previous story
Next story

In July 2011, the phrase “Cultural Marxism” broke into the mainstream thanks to a long and rambling manifesto. It was published after the author, a Norwegian far-right terrorist, killed 77 people in Utoya, Norway, the majority of whom were youth attending a left-wing political summer camp.

Anders Breivik saw these youth as a threat to the White Europe that he wished for. Cultural Marxism, he explained in detail, was a political theory pushed by Jews and feminists to destroy Western Civilization.

It was code for the racist, Islamophobic, anti-Semitic, violently sexist worldview that drove Breivik to commit such a mass horror.

Breivik’s crimes should have been the moment that Canadian journalists realized that we have an organized white supremacy problem. His manifesto — rambling, long, semi-coherent and deeply racist — touched on many of the tropes that have dominated Canadian discussions about the far right for years, including before and after the attack at the Islamic Cultural Centre in Quebec City in 2017.

Breivik laid it out for us: how university campuses are hotbeds for Cultural Marxism and feminist organizing, how global movements of refugees threaten white Europe and through anti-Semitic tropes, how media engages in “fake news” to lie to people, and so on. He even started his manifesto with the heading: “Political correctness is Cultural Marxism.”

After his rhetorical arguments, he then explains how to carry out an act of mass terror.

At the time, I remember reading Breivik’s manifesto in shock to see that someone had summed up every horrible thing that I had become used to reading on the Internet. For years, I had followed racists' websites and blogs to understand a curiosity; but Breivik’s words and actions felt like a watershed moment. We now had the proof to link online hatred and rhetoric, with real-life acts of violence. We saw, clearly, that organized hatred for Islam and Muslims was deadly, and what coded language about Jews, women, Marxists, Antifa, refugees and Liberals really meant to organized white nationalists. The proof was undeniable, and worse, it was set in blood.

Breivik focused on Europe and Western settler-states, so it wasn’t surprising to read Canada referenced from time to time throughout the thousand-plus pages. He lamented Canada’s low birth rate. He cited a National Post article that argues that so-called “homegrown” terror is a threat to Canadians. But he took specific interest in an issue that I was involved in: the management of Ryerson University’s multi-faith prayer space. He referenced the Canadian Federation of Students’ Taskforce on the Needs of Muslim Students. There was a direct line from student organizing in which I was involved, to the disgusting ramblings of a mass murderer.

Canadians never learned the lessons that we should have following the Utoya massacre. There was no understanding from among politicians or media that the buzzwords that drove Breivik were driving Canadian extremists as well. At Maclean’s, they examined Breivik through the lens of a lone gunman, inexplicable and racist, but with no lessons for us to learn. Colby Cosh summed up how the Canadian media and political establishment understood Breivik in a quip that was profoundly incorrect: “Although Breivik’s boasts about being part of a Europe-wide movement of right-wing terror are yielding nothing but wind…” he writes, and then delves into what was known about Breivik’s childhood at the time. Scanning through the footnotes of his manifesto alone demonstrates that Cosh should have known then that this was more than simply wind — Breivik’s sources reveal an English-language global network of racist writers and thinkers whose entry into the mainstream was simply a matter of time. With the right prophet, these ideas could easily spread.

No one did more to mainstream the theory of Cultural Marxism than Jordan Peterson, and not enough commentators or journalists made the connection to its racist, far-right origins. Peterson became an international superstar with the help of journalists promoting his brand of social critique, while doing the bare minimum to interrogate and investigate the origins of his social theories. In a few short years after Breivik’s massacre, the theories that underpinned his rampage dominated right wing Facebook groups and movements. They can even be found sanitized in Canada’s national newspapers.

We knew in 2011 that violent rhetoric begets violence. We knew in 2018 that a Canadian mass murderer was radicalized online by softer right-wing forces. And we know, again, that the organized global forces of white nationalism feed one another.

Consider this from the National Post’s Barbara Kay in November 2018: “Horowitz has a 50-year history of civil-rights activism. Horowitz only hates Marxism, including the cultural Marxism of identity politics, so he never assigns collective guilt to individuals.” The Horowitz she is defending is David Horowitz, who faced protests when he was invited to speak at Dartmouth College in the United States, last year.

We knew in 2011 that violent rhetoric begets violence. We knew in 2018 that a Canadian mass murderer was radicalized online by softer right-wing forces, like Ben Shapiro and Tucker Carlson. And we know, again, that the organized global forces of white nationalism feed one another. The Christchurch murderer wrote a similar manifesto to Breivik’s, except updated for a 2019 audience.

When will Canadian journalists finally make these connections? Is New Zealand going to be our tipping point? Or have we already proven incapable of learning this, as a homegrown terrorist has already killed and injured our neighbours and friends?

I doubt I could even express

I doubt I could even express the fury I feel at Canadian political leaders who have not merely tolerated, but actually stoked violence with their cynical pandering to extremists for votes, and minimizing of harm to victims. As for “our” media – at this point it really does belong in quotes – so-called balanced reporting is anything but, giving credence to ideas that belong in a sanitary landfill with an extra heavy duty liner. They pretend that truth is a point equidistant between two positions, no matter how deranged one is. I never imagined I’d see the day when people who treat others’ basic humanity and rights as up for debate are mainstream, and white supremacy is a growth industry, but here we are. I can’t say I’m particularly sanguine about the likelihood of Christchurch finally shaking us out of our apparently limitless complacency, but thanks for your righteous anger, and for not mouthing the usual platitudes.

I think we also need to start

I think we also need to start shining a light on the significant sources of money behind some of this filth. This kind of thing wouldn't be spreading as fast as it has without funding. These far right and alt-right organizations and web presences are often well funded by some very wealthy individuals, some of them in the oil business. Perhaps the appearance of connection between the oil lobby and neofascists would evaporate under closer scrutiny . . . but whatever it found, I think some closer scrutiny is warranted.

Agreed, but where does the

Agreed, but where does the kind of scrutiny needed actually happen, except outside the mainstream, where many if not most people don’t stray? What a terrible time to be saddled with media that’s mostly controlled by people who use it to make sure those connections you noted never see the light of day. Someone close to me worked as a journalist for years, but finally got out in disgust, and that was BEFORE the abomination that is Postmedia. Individual journalists can try, but they’re up against their own editorial department and management, who get hired because they sing from the same hymn book as their corporate masters. How do you get people to recognize that they’re drawing their water from a poisoned well, much less ask who poisoned it and why?

Coming from the same woman

Coming from the same woman who said that national outpouring after the Humboldt Broncos Tragedy was due to the victims being white, young and male and refers to all white men as "evil" i think any reader with an IQ above 70 should file this article under B for Bullshit. When you get people like Nora with obvious narcissistic personality disorders to write drivel about "the alt right" while at the same time being so far Left it would make Karl Marx blush, it doesn't bode well for this publications integrity. This is a woman who extols the virtues of Socialism, a socio economic theory that in practice has murdered 150+ million since 1918 and has a worse human rights record than Nazism.

So to all readers I implore you, always do your due diligence and research who the authors of any article are before accepting anything they read as factual, unbiased or coherent.

I think if history is any

I think if history is any indicator that there will be a lot of misery before possibly more misery before it's taken seriously. Then little will be done.

I think this is beyond the ken of the average joe and therefore the other average joes are going to have to fight - organise and learn and fight.

I was born in 1939 and wasn't really old enough during WWII to understand the lengthy parade of fascist extremism/revenge sentiment fuelled by the first world war and it's ugly aftermath. Somehow I doubt that many of my parents generation fully grasped the causes and effects - especially as, I now realize, that most of them were "soft" white supremacists/anglophiles. The amount of casual bigotry and racism that passed for civil discourse in my youth was only countered by my mother's early version of "cultural Marxism"! To this day I credit her for expanding my curiosity and the desire for in-depth explorations of western politics and economic imperialism. She played the devil's advocate throughout her life and embedded a skepticism in me about the usual American heritage propaganda we were fed in school. She made a habit of listening to early radio broadcasts from the foundational meetings of the United Nations at Lake Success, NY. She listened closely and her acerbic comments on the debates were largely over my head but they set the tone and the bar that encouraged critical thinking. It took many years for these early influences to reach critical mass in me - far too long in truth. But now, in ripe old age, it has flowered and as with many other people, produces not just fury but a cold determination to make political leaders and so-called influencers accountable for their cowardice, their irresolution, their pandering to the fears and the ignorance of those who foresee and foretell with lies and hatred, the looming loss of white privilege, the looming corruption of gender purity, the apocalyptic rhetoric about the loss of "civilization, as we know it". Well, anyone with even the most meager knowledge about "civilization" will recognize that there has been little that is admirable about humanity's evolution or progress. In reality, it is a testament to the irrational drive for survival that keeps the human experiment alive. Given the current situation I'd put money on the experiment's ultimate failure.