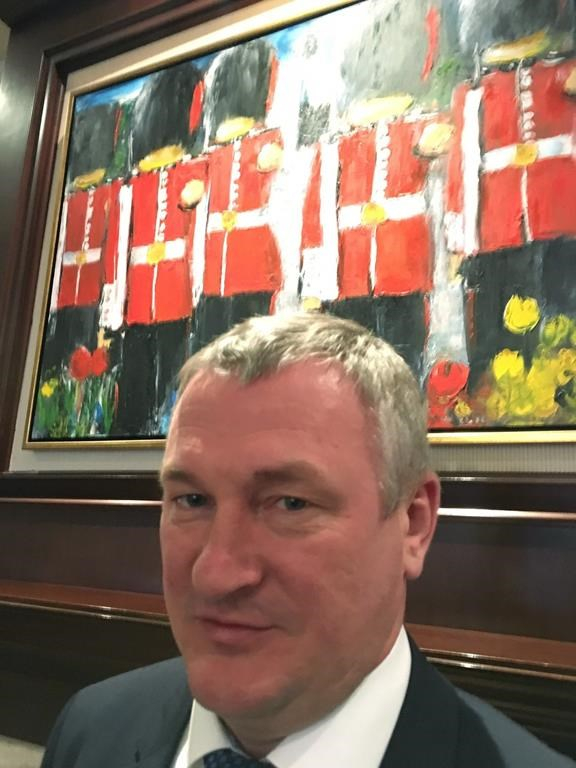 In the latter days of his military service, he was posted to the volatile Caucasus region, where ethnic conflict and strife rose amid the Soviet Union's disintegration.

"I came back to an independent Ukraine," Kniaziev said through a translator on a recent visit to Ottawa. "That was also the reason I decided to become a policeman because I was exposed during my military service to blood and to fighting that took place in that time, at that area."

A generation later, Kniaziev is the chief of the National Police of Ukraine at a pivotal moment in his country's history. He is now responsible for protecting the integrity of Ukraine's March 31 presidential election.

The election faces daily threats from a familiar source: a determined Russia bent on using cyberspace to sow disinformation to undermine the democratic ambitions of a country it still considers part of its orbit.

"I feel a great sense of responsibility, ensuring the proper elections," said Kniaziev, whose furrowed brow and strapping, thick frame suggests the presence of invisible anvils on each of his broad shoulders.

"Unfortunately we are in a position that Russia is our enemy now, and Russia has never been weak. We have to be very honest and very realistic in assessing the capabilities of Russia."

Kniaziev spent time with RCMP counterparts, Toronto police and other leading federal government officials in Canada's diplomatic and security apparatus in Ottawa earlier this winter. Canada has been helping Ukraine build its national police force following the tumultuous events of early 2014 that saw the ouster of the country's Kremlin-backed president after pro-democracy Maidan protests in Kyiv, and Moscow's subsequent invasion and annexation of Ukraine's Crimean Peninsula.

The Police Training Assistance Project, run by Global Affairs Canada, is part of the government's broader assistance to Ukraine, which includes a Canadian Armed Forces mission of 200 trainers that was extended last week, the deployment of hundreds of election observers for the upcoming ballot and the imposition of sanctions on more than 100 Russians.

Kniaziev and his Canadian counterparts exchanged information and best practices on how to cope with the inevitable threat of foreign interference in elections.

Canada has struck a special committee, a "critical election protocol," composed of five senior public servants who will decide whether a malign act of interference in this October's federal election warrants going public in the middle of the campaign.

Kniaziev and his Ukrainian colleagues describe their country as a petri dish for Russian cyberattacks — known in 21st Century military doctrine as "hybrid war" — and say the countries that partner with it, such as a Canada, have a lot to learn from them as well.

Russia has also undertaken traditional military manoeuvres against Ukraine by seizing Crimea and supporting separatist rebels in its eastern Donbass region, but cyberspace has become the main battlefield.

That has come to encompass a wide spectrum of malign activity, from trying to directly hack the online infrastructure of elections, to influencing public opinion through misinformation and generally sowing unrest.

"Whenever Russia doesn't feel like it wants to be involved in direct, naked aggression they are involved in all of these subversive hybrid activities," said Kniaziev.

Ukrainian police and the Mounties are also working together on a daily basis. "It's a very practical co-operation," he said. "We can witness true camaraderie between Canadians and Ukrainians."

The constant state of vigilance has also created a heightened state of national stress, something Kniaziev only realized after spending time on the beat with rank and file Toronto police officers during his recent trip.

As he headed back to Ukraine, he came to recognize the need to incorporate mental health professionals into the daily patrols of his country's police officers as part of their regular interactions with Ukrainian citizens.

"We have quite a number of people who have so-called Vietnam syndrome, meaning some mental issues," he said.

"The society in general does not understand who these people are, where they are coming from. The approach we saw in Toronto really impressed us."

Kniaziev blames the ongoing strife with Russia for affecting his country's national psyche.

"It's been six years of ongoing war with our neighbour, so Ukrainian society lives in a totally different reality, if we were to compare with the Canadian society."

Canada extends Iraq and Ukraine military missions to 2021 and 2022