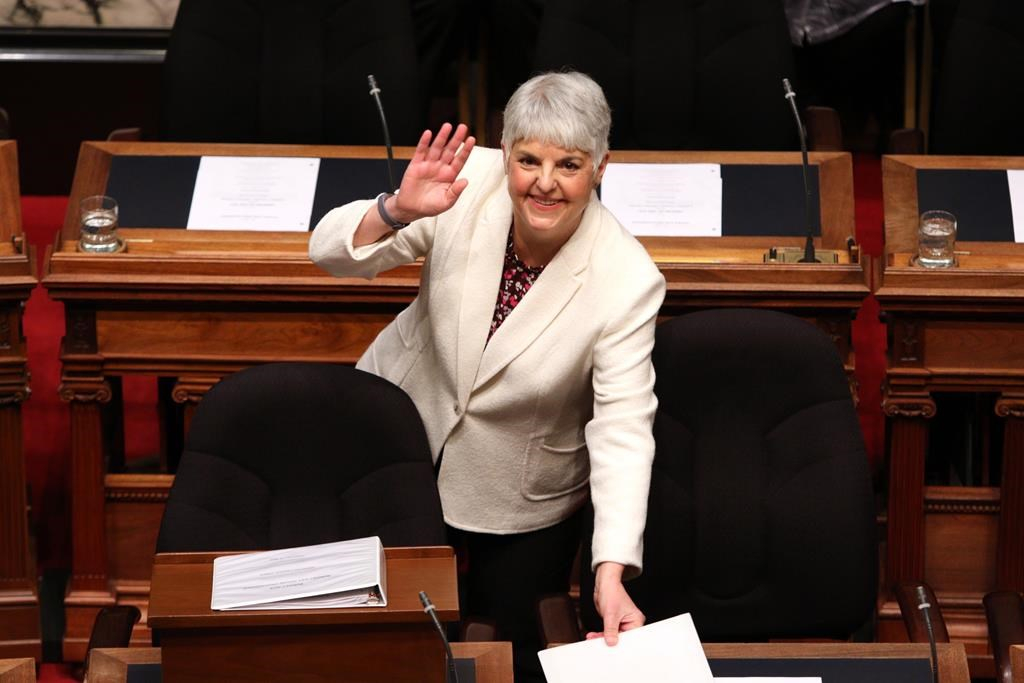 Finance Minister Carole James arrives to deliver the budget speech as she waves to people in the gallery at the legislature in Victoria, B.C., on Tuesday, February 19, 2018. File photo by The Canadian Pres/Chad Hipolito
Previous story
Next story

James introduced legislation Monday that she said meets the objectives set out a year ago by Premier John Horgan in a policy framework.

"British Columbians are counting on us to attract LNG investment that meets strict conditions: delivering jobs and financial benefits to B.C., creating economic partnerships with Indigenous peoples, and protecting our clean air, land and water," she said in a statement. "This legislation completes the process of creating a fiscal framework that invites investment while supporting those conditions."

Under the changes, the government would amend the Income Tax Act to implement the tax credit for LNG development. It would also repeal the Liquefied Natural Gas Income Tax Act, which it says created barriers for investment and left the province open to footing the bill for special industry tax and regulatory protections.

However, the Green party said the government's actions are hypocritical because they stray from its CleanBC plan to reduce carbon pollution.

In October, LNG Canada announced plans for a $40-billion project in Kitimat.

The government said the tax changes it is making will provide the fiscal framework needed for the project, which is expected to create 10,000 construction jobs and up to 950 permanent jobs in the processing terminal.

The new tax credit would go in effect on Jan. 1, 2020, to companies that qualify for it. It would be calculated at three per cent of the cost of natural gas and could be used to reduce B.C.'s corporate income tax rate from 12 to nine per cent.

The Finance Ministry said the previous LNG income tax was removed because it created uncertainty and risk to investors but the natural gas tax credit has been retained to encourage companies to pay provincial corporate income taxes. It said qualifying corporations would be those with a principal business involving oil and gas exploration, development, refining marketing or liquefaction of natural gas.

Green party Leader Andrew Weaver said in a statement the government's actions are pulling the province in two different directions.

"Continuing to push for LNG development is short sighted and works directly against CleanBC objectives," he said.

"After years of criticizing the B.C. Liberals for their generous giveaway of our natural gas resources, the B.C. NDP have taken the giveaway to a whole new level. The legislation brought forward by this province is a generational sellout."

Peter McCartney of the Wilderness Committee also criticized the legislation for not aligning with the CleanBC plan.

"Premier Horgan is talking out of both sides of his mouth on climate change," McCartney said.

"British Columbians are all doing their part to cut carbon pollution while at the same time he's giving $6 billion in tax breaks and subsidies to construct the most polluting project in the province."

The Business Council of British Columbia, meanwhile, backed the government's approach, saying the changes will allow the province to compete in LNG markets around the world.

"If we as a province are purposeful and apply this same competitive lens to all our natural resource, technology and energy export sectors we can become the low carbon supplier of choice globally," Greg D'Avignon, the council's president and CEO, said in a news release.