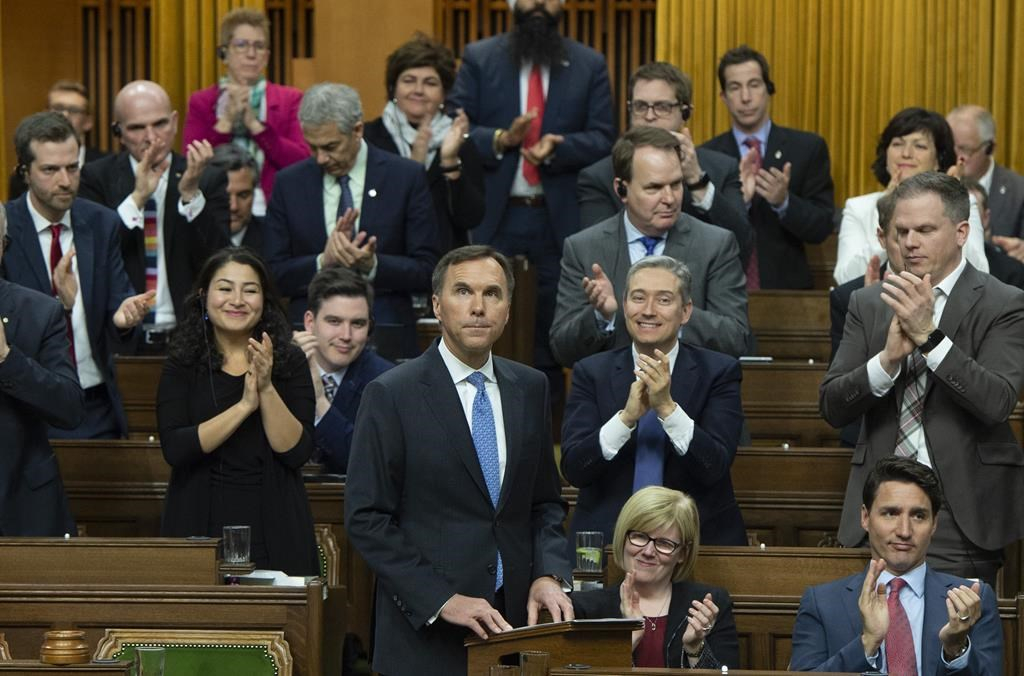 Finance Minister Bill Morneau receives a standing ovation from members as he delivers the federal budget in the House of Commons in Ottawa, on Tuesday, March 19, 2019. File photo by The Canadian Press/Sean Kilpatrick
Previous story
Next story

Concerns are being raised about limits to who might qualify for aid under a section of this week's federal budget geared toward supporting journalism, and whether the money will, in the long run, save a sector of Canada's media industry that has been in financial freefall for a decade.

Tuesday’s federal budget disclosed new details about the distribution of $595 million that had been earmarked in the fall economic statement for promoting Canadian journalism.

Qualifying criteria would see money directed at journalistic organizations primarily involved in the production of original news, with an emphasis placed on coverage of democratic institutions and processes.

The budget also revealed an "independent panel of experts from the Canadian journalism sector" would be created to help figure out which news will be eligible to receive money or tax credits over a five-year period.

The Opposition Conservatives have dismissed the measures, accusing the Liberals of buying off the media in advance of the October election, at taxpayer expense.

The independent panel is key to ensuring the government itself isn't perceived to have a hand in deciding who gets money, and who doesn't, says Heritage Minister Pablo Rodriguez.

"We must protect journalistic independence and that’s why an independent experts panel will define eligibility to these new investments," the minister told The Canadian Press in an email. "We are going to the root of the problem and creating concrete measures to support Canadian newspapers, big and small."

But that specificity — that the government means to support newspapers in particular — is what draws criticism.

A 2017 report by the Public Policy Forum, called "Shattered Mirror," indicated that about one-third of journalism jobs in Canada were lost between 2010 and 2017 as advertising revenue for newspapers, TV and radio stations shrank dramatically. Much of the revenues media outlets depend on have been siphoned off by online platforms such as Google and Facebook. The result has been not only layoffs throughout the industry but the outright closure of many local papers.

"Canadian written press has taken (the biggest) hit as they've lost half of their jobs since 2010," Rodriguez notes. The government, in announcing plans to help the industry, has cited the findings of the Public Policy Forum, which has warned that fewer journalists reporting on public affairs will ultimately harm democracy.

The budget proposed refundable tax credits to help media organizations cover up to a quarter of their labour costs, but the credits would only be made available to what are deemed "Qualified Canadian Journalism Organizations" and would exclude entities "carrying on a broadcasting undertaking."

The Canadian Association of Broadcasters calls that unfair.

"If the government is truly committed to recognizing the vital role media plays in helping citizens make informed decisions, it must find a way to include radio and television news outlets in this tax-credit regime," the association's board chair Lenore Gibson, a lawyer for Bell Media Inc., said in a statement.

Magazine publishers also would not qualify for the tax credits if they already receive aid through the Canadian Periodical Fund.

Media union CWA Canada welcomed the budget measures but worried that the rules could allow a traditional media giant such as Postmedia Network Inc. to benefit without necessarily helping journalism.

"We need to know there will be rules to ensure that a company like Postmedia can't simply take millions of dollars in labour tax credits and pass that on to the debt-holders who control it or to pay huge executive salaries or bonuses," CWA Canada president Martin O'Hanlon said. He represents journalists at Postmedia papers in Ottawa, Regina and Montreal, among others, and at the CBC and The Canadian Press.

Postmedia, which operates dozens of weekly and daily publications, including the National Post, along with several websites and magazines, is a publicly traded company. Its executive chairman Paul Godfrey has been a vocal proponent of government support of the country's news industry and called the tax-credit scheme "a turning point in the plight of newspapers" when it was announced in the fall.

A spokeswoman for Postmedia said the guidelines unveiled by the Trudeau government so far indicate the company would qualify for the labour tax credits, but added that it's too soon to say for certain.

News Media Canada, which represents 800 publications throughout Canada, also said Friday it was unclear whether the country's biggest media firms would qualify for the tax credits. A spokesman, however, said some community newspapers had already indicated they planned to hire more journalists based on details provided in Tuesday's budget.

"I don't think it's going to spark a whole bunch of new hires of journalists," Lindgren said.

Regardless, under the parameters set out in the budget, most of the aid money would be funnelled to struggling mainstream players, said Chris Waddell, a professor at Carleton University's School of Journalism who questions the logic behind the move.

"We're in a situation where, in fact, government is subsidizing the least likely people to succeed in the current format," said Waddell. "My question is why? To what end?"

Nearly 270 local news outlets have either closed or merged in 194 communities across Canada since 2008, according to Ryerson's latest tracking data, published last month.

In that same timeframe, 108 new or merged outlets have been launched in 78 communities.

The bulk of the journalism funding proposed in the budget — $360 million over five years — is attached to the labour tax credits. Once the budget is approved, the credits would apply retroactively to the beginning of this year and cover 25 per cent of the costs of journalists working a minimum of 26 hours per week for 40 consecutive weeks.

Qualifying organizations would also be required to employ at least two journalists who spend at least three-quarters of their time "engaged in the production of news content, including by researching, collecting information, verifying facts, photographing, writing, editing, designing and otherwise preparing content."

And news content would be defined as "matters of general interest and reports of current events, including coverage of democratic institutions and processes."

Outlets primarily focused on a particular topic such as sports, arts, entertainment or other industry-specific news would not meet that test.

The budget also includes tax credits of 15 per cent on subscriptions to digital news websites, allowing Canadians to claim up to $500 worth of subscriptions per year to qualify for a maximum $75 non-refundable tax credit. But that credit won't be available until 2020 — after the next federal election.

Such a tax credit is doomed because there is so much free content online, and the public cannot differentiate between quality and commodity news, said Waddell.

As well, the budget proposes allowing registered journalism organizations to qualify as charities through the Canada Revenue Agency, so they can issue charitable tax receipts to people or registered charities who donate money to them.

Among the restrictions being imposed for charitable status qualification, news organizations must have a board of directors operating at arm's length from each other, must not be "factually controlled by a person" and must not receive money from any one donor that represents more than 20 per cent of total annual revenues.

The 595 million gift to the

The 595 million gift to the MSM might make them more malleable…..for Liberals.