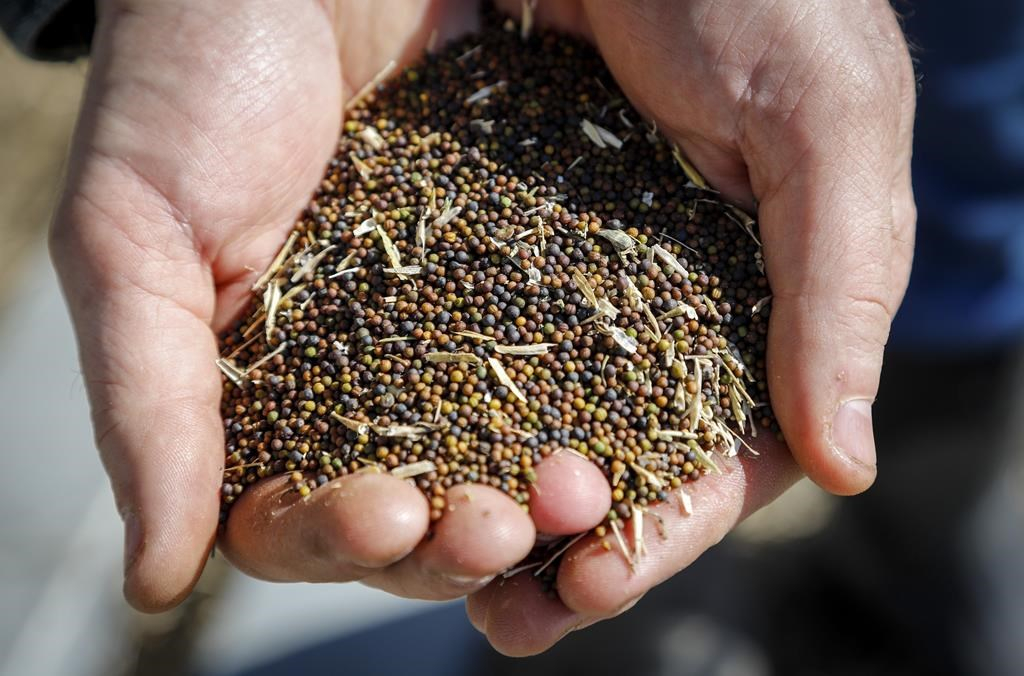 Canola grower David Reid checks on his storage bins full of last year's crop of canola seed on his farm near Cremona, Alta., on March 22, 2019. File photo by The Canadian Press/Jeff McIntosh
Previous story
Next story

Canadian farmers are facing an uncertain future after China escalated its feud over canola on Tuesday.

"There is a lot of confusion amongst farmers about what is able to be exported," said David Quist, executive director of the Western Canadian Wheat Growers. China blocked canola shipments from a second Canada-based producer on Tuesday over alleged contamination issues.

A statement on China's General Administration of Customs website said officials detected several hazardous organisms in canola shipments from Regina-based Viterra Inc. Viterra, which is part of Glencore Agriculture, did not immediately respond to a request for comment.

Winnipeg-based Richardson International Ltd. had its export permit revoked in March due to hazardous organisms allegedly found in the company's product.

Since then, the Canola Council of Canada said all of its members have reported that Chinese importers are unwilling to purchase their products.

The result is uncertainty at the cusp of planting season, which begins in mid- to late-April for many farmers.

Quist said farmers have a lot of questions: "Therefore, a lot of people are saying: 'What should I be planting? What should I be putting in the ground? Is there going to be a market for my product by the end of harvest season when it's coming off the field?"

The canola council echoed that concern.

"When China injects uncertainty, it makes growers question whether they should grow food for Chinese people, said Brian Innes, vice-president of public affairs with the council.

Canadian producers will make decisions that are best for their farm, he said.

One canola farmer, David Reid, told The Canadian Press late last week that the reports of a purchasing block by China on Canadian canola will make him think about other options.

"We don't want to grow something we can't sell," he said, adding there aren't many other crop options in the part of Alberta where his farm is located. Other options available to him tend to sell for less than canola traditionally has, he said.

Both the wheat and canola groups called on the government to send a delegation to China to address the issue.

China — a major market for Canadian canola that accounts for about 40 per cent of Canada's exports of canola seed, oil and meal — is the sole country to raise a technical issue with the product, said Innes.

Authorities in Canada's other export markets, including the U.S., Mexico, the European Union, India and Japan, have not raised any issues, he said.

"We're very perplexed because we're confident in the quality of our Canadian canola."

But China raised a technical concern and there needs to be a technical solution, he said.

Prime Minister Justin Trudeau mentioned the possibility of sending a delegation, in response to questions from reporters during a stop in Winnipeg on Tuesday.

"We're very much looking at the possibility of sending a high-level delegation to China," he said.

"We know that the canola produced here in Canada is top quality, and the oversight, inspection and science that surrounds what we do here is top-notch and world-class, and that is certainly something that we are going to continue to impress upon ... our Chinese interlocutors on this issue."

Some have suggested the canola ban is connected to the Canadian government's decision to arrest a top Chinese tech executive in December at the behest of the United States. Canadian authorities arrested Meng Wanzhou, the chief financial officer of Chinese tech giant Huawei, in Vancouver and the government has since approved for her extradition case to proceed.

"But we are taking very seriously this situation around canola as well," said Trudeau.